Resurgence of the Gun Nuts

Not even Maryland is immune as the Second Amendment hawks get scared. 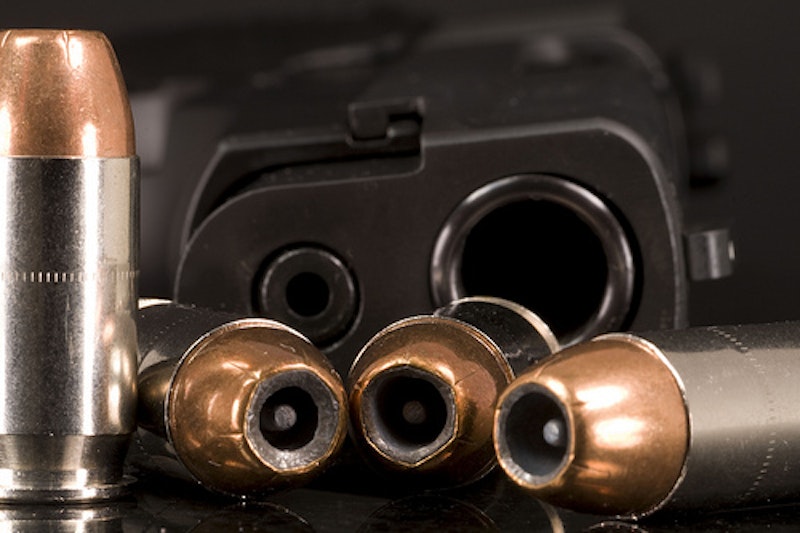 The gun crazies are at it again. In fact, they never really let up. Guns are the primal scream in America, and as with abortion, capital punishment, gay marriage and illegal immigrants, there's no compromise. You're either with the ghost of Charlton Heston, or against him. He'd have it no other way. From his cold dead hands to your clammy mitts.

Try to have a civil conversation on any of those issues and you'll end up sounding like a bunch of screaming meemies. Minds are made up, one way or the other, and there's no changing them. And to prove that guns are equal opportunity weapons of mass or even minimal destruction, on the very day after the Virginia Tech massacre in 2007, two secret service officers were wounded when another's gun accidentally went off at a White House gate. Guns do not discriminate.

Item: On two recent occasions, individuals audaciously displaying loaded firearms showed up at rallies where President Barack Obama was the speaker in states where carrying exposed loaded weapons is legal.

Item: In March, 2009, Wayne La Pierre, executive director of the National Rifle Association, confided to TV entrepreneur Glenn Beck that Obama has a "secret plot to grab our guns." The statement was made after Obama said that many illegal weapons were finding there way from the United States to drug cartels in Mexico. Obama asked Mexico to help stop the illegal gun traffic.

Item: The NRA made nearly $2 million in campaign contributions in the 2008 election cycle—$235,330 to Democrats, $824, 632 to Republicans, with $906,612 going to incumbents, according to the Center for Responsive Politics. The NRA also spent millions in off-the-books money for such things as advertising and voter registration.

Item: On May 22, 2009, Obama signed a law that prohibits the restriction of loaded firearms in national parks or wildlife refuges as long as it complies with the laws of the state in which the park or refuge is located. The bill, sponsored by Sen. Tom Coburn, Republican of Oklahoma, rescinds a Reagan-era ban on loaded guns in national parks and refuges.

Item: Bullet manufacturers are working overtime, as many as four shifts in a 24-hour period, to meet the demands of gun owners who fear a government ban on firearms, according to news reports. The NRA says that sales are usually about seven billion rounds of ammunition a year but since Obama took office the number has jumped to nine billion.

Item: The FBI says that instant background checks on prospective gun buyers have spiked 25.6 percent to 6.1 million in a five-month period from January to May of this year.

Item: A stall operator at Baltimore's Lexington Market pleaded guilty to illegally selling firearms (and cocaine) from his Utz Potato Chip stand in the downtown historic marketplace, according to a Citypaper investigative report.

Item: Cleveland Cavaliers' guard Delonte West was arrested in Prince George's County for transporting two loaded handguns and a loaded shotgun in a guitar case on his motorcycle. It is illegal to transport loaded guns in Maryland without a permit.

Item: The U.S. Senate, by a vote of 68-30, approved legislation to allow transporting guns on Amtrak trains, the same policy as with airlines, in checked baggage or the railroad would lose its $1.6 billion in public subsidies. Sponsored by Mississippi's Republican Sen. Roger Wicker, the favorable vote included 27 Democrats from the South and the West, including Majority Leader Harry Reid, who is in a tough reelection contest in Nevada. Amtrak banned the transport of weapons following 9/11.

Item: The U.S. Senate rejected a reciprocity provision that would have allowed gun owners with valid permits from one state to carry concealed weapons in another. The bill is introduced regularly by Sen. John Thune, Republican of South Dakota.

Item: The U.S. Supreme Court overturned the District of Columbia's gun law of more than 30 years, the strictest in the nation in one of the deadliest cities in America.

Item: South Carolina sponsors an annual Second Amendment Sales Tax Day during which gun buyers pay no sales taxes on the firearms they purchase. It occurs on the two days following Thanksgiving.

Item: Guns are used in America 2.5 million times a year or 6850 times a day, according to the Gun Owners Foundation.

In the aftermath of the Virginia Tech slaughter, those banshees for and against gun control were tip-toeing around the issue, hoping to cash in on the carnage but fearful of the consequences of trying. A mournful period of silence and respect was the order of the day. But wait.

The subject had been largely dormant since the Columbine massacre in 1999 in Jefferson County, Colorado. Very little was said following the subsequent shootings in 2006 at the Amish school in Lancaster County, PA, mainly because of the private nature of the Amish community and their resistance to modern appliances such as television cameras. But the election of Obama changed all that. Gun owners and Second Amendment stalwarts fear that Obama and the Democratic Congress intend not only to confiscate their weapons but to ban gun ownership outright. At least that's what the noise machine would have us believe.

Many liberal Democrats want to plunge headstrong into an all-out battle to tighten gun control laws at the federal level, but they can't figure out how to do it without arousing the NRA, its mailing list and its formidable money-dispensing operation. And the risk is that if Democrats drag the issue front-and-center a year before the midterm Congressional elections, it could backfire, as it has in previous elections, and jeopardize their newly won majorities in Congress as well as create an unintended burden on the White House.

The intricacies of gun control legislation turn mainly on a glossary of definitions—"gun," "semi-automatic," "assault weapon"—which are vague and unfamiliar to those who are less than enthusiastic about guns and who are certainly not gun owners.

Depending on who's doing the counting, there are an estimated 80 million gun owners in America, and by another accounting roughly 250 million guns of all types at-large in the nation, according to Answers.Com. But who really knows? Those who possess firearms range from collectors, to law enforcement officials, hunters, homeowners and criminals. Any one of them can inflict severe, if not lethal, damage if prompted. And despite all of the caterwauling about gun ownership and Second Amendment rights, a Gallup survey showed that 56 percent of those polled favor stricter controls on guns.

But ever since Columbine, no action has been taken to tighten gun control laws. In fact, since then many of the legal changes have favored gun rights advocates-the expiration of the ban on assault weapons, legislation shielding gun manufacturers from lawsuits and bans on firearms traces. Even the nation's high courts have recently favored gun owners after remaining silent on the issue for nearly 75 years.

Maryland's neighbor to the south, Virginia, is a so-called carry state, one of 48 in the nation, where anyone who passes the minimal hasty background check can own and carry a gun. The theory is that an armed society is a polite society because you never know who'll blow your head off. Maryland officials have traced many of the illegal guns confiscated in the state to sources in Virginia.

In Maryland it's relatively easy, though much less so than Virginia, to own a gun if your record is clear of criminal activity and you have the patience to wait 10 days until a background check is complete. And therein lies one of the major safeguards because the Maryland law provides a cooling-off period for hotheads as a way of trying to reduce crimes of passion. (The Maryland State Police gun permit section will give out no information or statistics without the inquirer first submitting questions in writing to the division commander, according to a response to a recent phone call.)

What's more, Maryland has a two-tier system of ownership. The first allows citizens to register and own guns that must be kept in the home solely as a means of protection against intruders and home invasions. The second level, which is much more difficult to obtain, is a permit to carry a firearm. And this is awarded only to those applicants whose jobs involve great danger or who, for example, transport large sums of money between businesses and banks.

In the angry days that followed the V-Tech rampage, and even as recently as this past summer, there have been calls and even approvals to arm the faculties at colleges and universities and, in some extreme overzealous cases, to allow students to pack pistols as the first line of self-defense on campuses.

As the NRA likes to say, guns don't kill, people do. Yes, but they often do it with guns.

Frank A. DeFilippo has been writing about politics for many years as an award-winning Maryland State House and political reporter, White House correspondent for the Hearst News Service and as a columnist and contributor for several newspapers and magazines as well as a TV and radio commentator. DeFilippo has reported from six national political conventions. He is author of the novel Hooked.