In a hopeful if contradictory essay in The New York Review of Books, Michael Massing finds a rainbow in the midst of the media's ongoing hurricane. 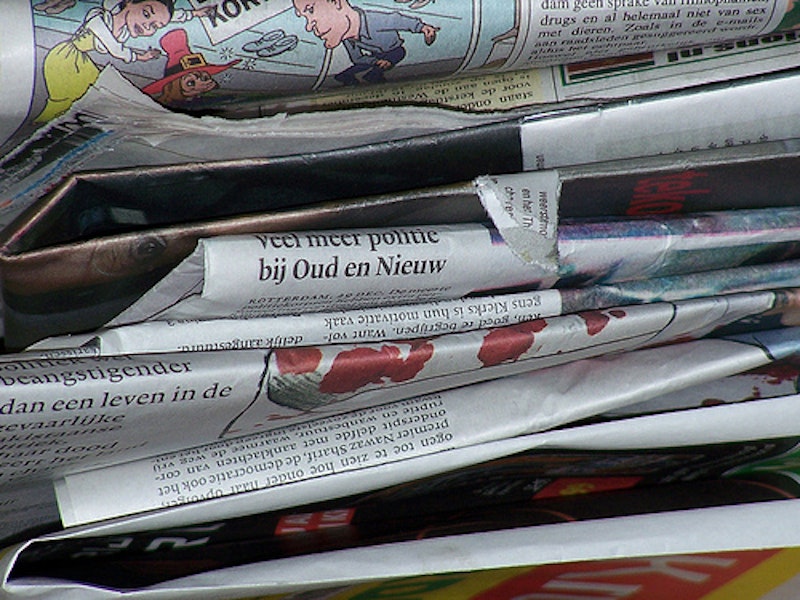 It's not much fun for any longtime journalist to pour water on the diminishing ranks of quixotic newspaper cheerleaders, but at some point you do wonder if these oracles, such as Michael Massing, are adding not only another shot of espresso to their morning Starbucks cappuccino, but maybe a liberal pour from a bottle of Jameson as well. No judgment rendered here: paraphrasing John Lennon, whatever gets you through the morning.

Massing, a contributing editor at Columbia Journalism Review, a 1992 MacArthur Fellow, and well known to the circle that reads, or used to, The New Yorker, American Prospect, The Atlantic and New York Times, can look back at a very full career. And perhaps it's because of this success that he felt duty-bound to write a long essay in the Sept. 24 New York Review of Books that selectively highlights anecdotal evidence for the case that while daily newspapers are on the ropes, their relegation to niche status is a long way off. He rattles on about upcoming pay walls (again) at The New York Times and Rupert Murdoch's properties—ignoring the simple fact that this concept, had it been implemented, and maintained, in 1999, when the digital handwriting was on the wall, his article might be unnecessary today—and the banter about the switch to non-profit status for media companies, a prospect that appears murky at best. Massing acknowledges that the Sulzbergers and Grahams would never go this route for the obvious fact that they'd be forced to sacrifice their wealth. But for less storied outfits, hey, who knows?

Here's the problem: a lot of Massing's examples are, to be charitable, misleading. He grabs some apples on the ground, and while extolling the Internet, cites a Pew Project for Excellence in Journalism (I'm holding my nose here, since Pew is a highly selective gold standard) study saying that the traffic increase at the top 50 websites increased by 27 percent in 2008 over the previous year, and was "fueled in particular by young people." Massing interprets this statistic (without naming the specific leading websites) as "a rare ray of hope."

He writes: "The MTV generation, known for its indifference to news, has given way to the Obama generation, which craves it." That's a leap, since newspapers and magazines were fat with readers and profits during the years that the condescendingly named "MTV generation" were young adults; and while it's indisputably correct that young people were engaged in Obama's campaign last year, as was most of the country, I doubt that those who "craved" news a year ago are feverishly following the health care debates and the Obama administration's international policies. Stories and videos about Mackenzie Phillips, Glenn Beck and net neutrality, maybe, but the stalled cap and trade legislation before Congress? I don't think so.

Massing changes gears, then, by making what would appear to be the preposterous claim that despite the clear reality of migration from print to web, "of all the time readers spend with a newspaper, 96 percent of it is spent on print editions and barely more than 3 percent on the Web." His evidence is gleaned "from one study," which conveniently isn't named. Massing is referring to Martin Langeveld's data-impoverished report last April under the aegis of the Nieman Journalism Lab, a foundation at Harvard University.

This 96 percent stat is, of course, absurd, as still-plummeting circulation at almost every daily in the country demonstrates, and just paragraphs later Massing quotes Dean Singleton, CEO of the country's fourth largest newspaper company, bemoaning the stark reality by saying, "When we look at why people quit buying the newspaper, it's overwhelmingly because ‘I can get if for free online.'" And as for the Obama Generation, be honest: how many of those youngsters who "crave" news do you see toting a print copy of the local paper in their backpack or handbag or briefcase?

The real jewel in this essay, however, is the following uncorroborated statement: "Whenever the Times's Bill Keller and other top editors speak in public, they invariably encounter readers who, expressing amazement at being able to read the paper online for free, plead [my emphasis] for ways to donate to it." Maybe that's true, but so what? And, actually, there are plenty of ways for aggrieved readers to "donate" to the paper of their choice. They could buy stock in the company if it's public (not many are rushing to do that), give gift subscriptions to the paper to 10 or 100 friends, or go to a newsstand (those that are left) and purchase every copy of, say, Keller's Times.

Massing also gives, in what amounts to a press release, a glowing description of all the money the Times has poured into its website. He says, "At its Midtown office, teams of cybergeeks, futurists, and ‘creative technologists' have worked feverishly to combine traditional journalistic practices with the protean powers of the Web." Massing's elaborate shilling aside, it's true that the Times boasts, by far, the most sophisticated and all-encompassing website of any daily paper in the business. Go the Times site and you can get happily lost in the mélange of podcasts, slideshows, videos, blogs by its most popular columnists, "sumptuous pie charts," all in addition to the content that appears in the print edition. I could spend a full five hours every day on the Times site alone and not get bored. But, like most people, I'm not retired or on vacation every day of the year, and as a result pass most of it up. I've no idea what I'm missing in the "welter" of information, but really, I'm no worse off.

Massing, like many journalists of his generation, who, much to their chagrin, really aren't part of their profession's future, has, with no small amount of both affection and trepidation, put a bullish spin on the fate of newspapers, and there's no harm in that, I suppose. But it's telling that his essay appeared in The New York Review of Books, a small-circulation biweekly that reaches an affluent but tiny number of readers. The irony here is that Massing's defense of newspapers and robust optimism that they'll somehow manage to stay relevant was, I suspect, largely unnoticed.