The quarantine has just passed the length of a typical summer vacation. How much further will we now regress into infancy? 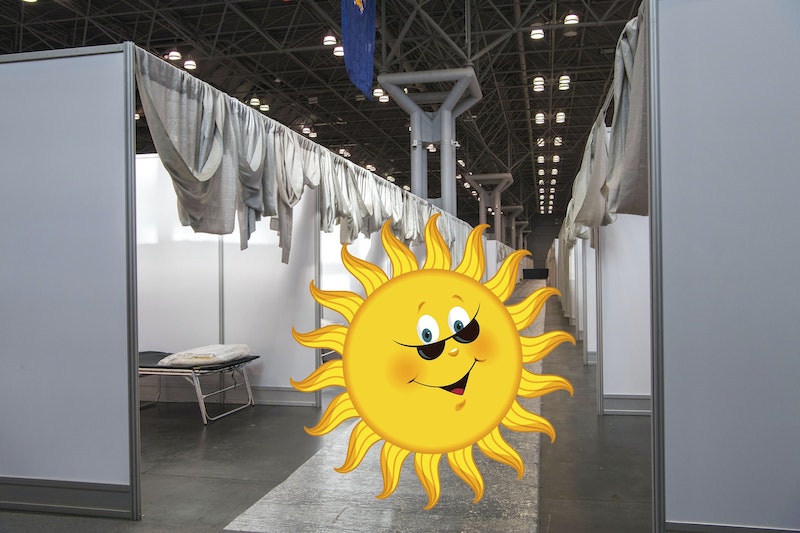 Four months is an important marker in the COVID quarantine. Four months is the beginning of another stretch of months, with no end in sight. The virus is currently decimating the Sun Belt, and while Neera Tanden tweets “it’s lucky it hit the blue states first,” I have a hard time seeing anything positive happening in the world. Moments of grace and courage abound among healthcare workers and patients battling the virus and all of the organizers still working on social service and civil rights weeks after the protest fever evaporated in what’s left of bourgeois America. But there’s no mass movement, there’s no dynamic image or leader or organization that’s emerged in the past four months.

Actually there are plenty of dynamic images, they’re just all bad.

And now we’re back inside. Or grilling. Or swimming (where? New Yorkers are out of luck). The quarantine continues apace, no different than the end of March, or the middle of April, whenever everyone started wearing masks. The routines haven’t changed, except for the dead and those about to die being sent in to work at universities and restaurants. Every private college in this country needs to be audited: the amount of suffering they could ameliorate instantly with their coffers is so much greater than giving out college degrees. Who gives a shit anymore? Have you used y=mx+b today? I stole that observation from Twitter.

Four months means we’re at the end of summer vacation, in the middle of July. For those of us who only lost one of our jobs in March, our days have stayed the same since then: new habits established, new strategies to stay sane, riding the waves into an endless night, laughing in the face of Death all along the way. “This is just a vacation, it’s not permanent leaving.” But there are no more kids on holiday. The coronavirus quarantine has passed the point of a summer vacation and become something less familiar, perhaps unknown—a sabbatical? A gap year? These are not very common experiences, certainly not the near-universal framing of a child’s years with three months of summer vacation dead center.

Regression will only accelerate: it’s already widespread (looming death, apparent apocalypse, moving back in with or talking more than ever with parents), but the combination of a vivid vantage point to see how obscene, corrupt, and inhumane our government is with the restrictions placed on us because of COVID—the people are powerless, and the next step after non-violent demonstration and occupation is obvious. But of course terrorism is what the state and capital crave because it’s very, very profitable.

Imagine if the RNC is bombed. Trump’s current position in the election is compromised, and a conveniently placed “ANTIFA” branded bomb could be his only sure ticket to reelection. Then again, is it even worth it? Trump doesn’t want the trouble, and capital is doing better than ever. The disconnect between the stock market and the unending apocalyptic chaos on cable news is a fat red signpost indicating this is all just a vacation. For now.

A friend of mine who didn’t lose his job but misses socializing much more than I do told me the other day he plans to get a sublet in Florida for the winter. The prospect of being shut inside with the sun setting at 4:45 p.m. was evidently too dispiriting to contemplate, and while I understand the frustration, the idea of moving right now unless forced seems insane to me. Even if you have means, why bother? Time goes by so fast, anyway. Four months! This is not a vacation. The pandemic is going to last for at least another year I’m assuming, so why not just bite through it? We’re already used to it and it’s summer! Get the grill out and cook meats like everyone else for a few weeks.

The fireworks have mostly stopped but I love the billboard for Phantom Fireworks alongside Baltimore’s JFX, right at the 29th St. exit. The grim reaper is carrying a scythe, but he’s also wearing a surgical mask. For some, that’s courtesy. For others, confusing. Others still, a dialectical model. Who can say? No one. So blow some shit up. The body’s response to repetitive trauma and restriction is to withdraw, but we must bite through it.

I’m not talking about doctors and waiters: they’re being sent to the frontlines of a germ war because powerful people are stupid, rich, evil, or some combination of all three. There’s no one I can trust in this catastrophe, not even Saint Fauci or Larry Hogan, Maryland’s relatively sane Republican governor whose 2015 cancellation of the red line did more to keep Baltimore segregated and racist than anything else. Governors like Hogan don’t want people from East Baltimore and North Baltimore to talk, interact, or, God forgive me from Silicon Valley, “interface with.”

In these weeks before the party conventions—in whatever improvised form they’re held—there’s nothing to do. People are dying of COVID “now more than ever,” and the charlatans have left the organizers to continue doing the real, unglamorous, and boring work of keeping people housed, fed, safe, and maybe even comfortable. But those are not dynamic situations, those are not novel events. They happen every day now, like car crashes and cancer deaths. The White House wishes the American public will become “numb” to the climbing coronavirus death toll, and we will. We already have, but by the end of the year, people will be rationalizing 300,000 dead and shrugging their shoulders. “If I get sick, I get sick.” This is not a vacation.