The Two Men Who Are David Brooks

The New York Times' occasionally conservative columnist is vexing, alternating between narcissism and common sense, but it's not yet his time to defect to The Daily Beast. 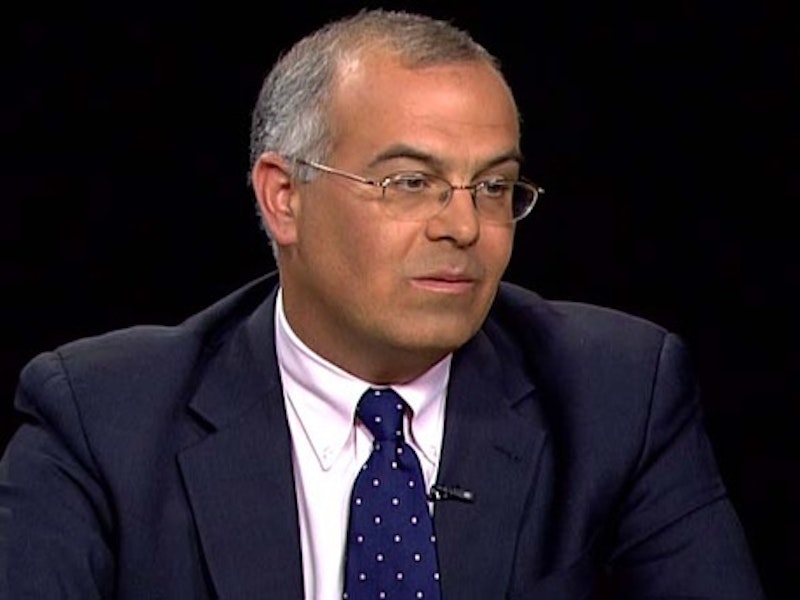 The uplifting news earlier this week that Howard Kurtz, The Washington Post’s type-as-fast-I-can-about-piddling-media-minutiae, is leaving that daily for Tina Brown’s Daily Beast, left me aching for more. When, for example, will The New York Times’ burnouts Gail Collins, Nicholas Kristof and Maureen Dowd, echo the cry of Kurtz and the dying Newsweek’s Howard Fineman (sinking even lower than his Post buddy by signing on with the urinal known as The Huffington Post) and yell, “Stop the World, I Want to Get On!” Those who still read daily newspaper op-ed columnists will, of course, be far better off once the stampede of wheezing, out-of-ideas writers ditch the mainstream media for flashy websites—and Barry Diller bucks—begins in earnest.

I couldn’t repress a snort of glee upon reading Kurtz’s explanation to Post readers about his momentous decision, in which he cautions everyone to “not get carried away” by the shift from print to digital, and—thank the Lord!—he’d still be putting viewers to sleep with his CNN show Reliable Sources. Nonetheless, Kurtz believes he’s on to something: “[T]here’s an awful lot of energy and excitement in the Web World. [Thanks for the bulletin, Howie.] I could not have imagined doing this five years ago, as a guy who just plain likes paper. So a significant shift is underway. Somehow, I became a trending topic on Twitter—and without even popping off, Rick Sanchez-style.”

Which brings me to the two David Brooks, both of whom jot down opinions for the Times. After reading his intolerably gooey column about Rahm Emanuel on Oct. 5, I was of a mind to consign the man to a cubicle next to Kurtz at The Daily Beast, where presumably the two of them might enjoy polite and edifying luncheon debate with Peter Beinart every fortnight at some university club. Attempting to strike a contrarian’s pose, Brooks insists that Emanuel’s reputation “for profanity and rage is vastly overstated.” (For the record, profane or not, I happen to admire the centrist Democrat Emanuel. He’s a brilliant political strategist and that he was pushed out of Barack Obama’s inner circle by more liberal and less practical advisers explains a lot about the President’s current woes.)

Most of the column is about Brooks, in his me-myself-and-I mode, although he did offer one paragraph that didn’t detail an exchange he had with the former Chief of Staff: "Emanuel’s like an urban cowboy poking his herd of cattle with a stick. Every head in the herd gets a poke every day. He’s willing to be a relentless noodge to keep the herd moving in the right direction."

Once, when Brooks wrote a column criticizing Obama’s fiscal policies—that’s the non-narcissistic Brooks, making sense—Emanuel asked the Great Pundit to stop by his office for a sit-down. Brooks says he showed up “wearing my asbestos underwear, but Rahm calmly made his case with graphs and charts.” After questioning Obama’s “tenacity” to prosecute the war in Afghanistan, Brooks ran into Emanuel at a Bruce Springsteen concert—I’m sure both of the middle-aged men almost cut their hair for the nostalgia revue—and the “warmhearted Machiavellian” was pissed off and barely shook Brooks’ hand. They both survived that close brush with outright nastiness, much to Brooks’ relief I’m sure.

Here’s where the insufferable and rather hypocritical Obnoxious Brooks goes on a tangent that ought to make academics happy he chose a career in media rather than teaching sociology to impressionable youngsters at some distinguished university. He writes:

I’m writing this appreciation of Rahm because success has a way of depersonalizing its beneficiaries. From the moment kids are asked to subdue their passions in order to get straight As to the time they arrive at a company and are asked to work 70 hours a week climbing the ladder, people have an incentive to suppress their passions and prune their souls. That’s especially true in Washington, a town [not, apparently, a city] with more than its fair share of former hall monitors, a place where politicians engage in these pantomime gestures of faux friendship and become promotable, hollowed-out caricatures of themselves.

Brooks says that Emanuel—or, as he calls him, “Rahm”—has remained “true to his whole and florid self.” Bully for the Chicago mayoral candidate, but what’s striking is that in the above paragraph Brooks is describing himself. Of course he was a hall monitor in high school, and maybe president of his class and the kid in the front row who raised his hand at every question a teacher asked. And while I’ve no idea whether Brooks has “subdued his passions,” he certainly worked long and hard to climb the professional ladder. Maybe he listened to Sam & Dave’s “Soul Man,” as a kid, but no lessons were learned. From the University of Chicago to the Washington Times to The Wall Street Journal to The Weekly Standard and finally the Times, he’s reached a level where he can tell readers that he interviews a lot of politicians and, well, he’s pretty darn important.

But then, in a fit of charity, I re-read a column by the Sensible Brooks from Sept. 30 about Meg Whitman, the former CEO and President of eBay who’s now running neck and neck with Jerry Brown in California’s gubernatorial race. Brooks, unlike many of his colleagues at the Times, isn’t distracted by imagined or real Tea Party static and correctly dismisses Sarah Palin as a “flamboyant performer.” Those opinions alone probably got him disinvited to a Frank Rich soiree on the Upper West Side, but he’s right that it’s likely the Republicans will nominate a fiscal conservative like Gov. Mitch Daniels or even Gov. Chris Christie to take on Obama in 2012. Brooks’ conclusion couldn’t have given succor to his many Democratic friends inside the Beltway: “Whitman has the personality type that you’re seeing more and more of these days. Not big picture, like Reagan. Not an idea volcano, like Gingrich. Not a straightforward man of faith, like George W. Bush. The quintessential New Republican is detail-oriented, managerial, tough-minded, effective but a little dry. If Whitman wins her race, she’ll fit right in.”

So, upon reflection, perhaps it’s best that Brooks remains at the Times—when the paper’s confusing pay wall goes up next year, he may reconsider—and let hacks like Howard Kurtz explore “the shift in media” at a ditzy, dashed-off website such as The Daily Beast.