Pro Debate Tips: It's All in Appearances

Some important lessons for O'Malley and Erhlich as they square off at tonight's live debate. 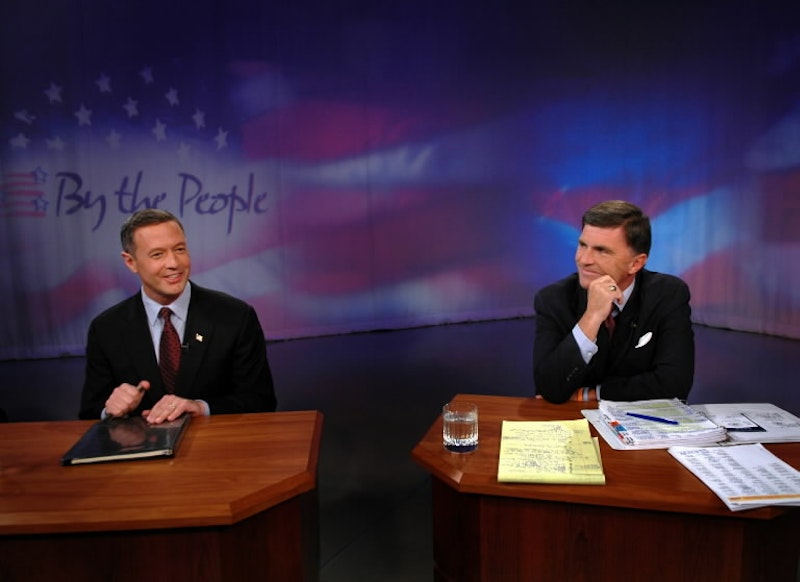 Debates are hard to win and easy to lose. And nobody really ever wins a debate unless there’s a terrible blunder by one candidate or the other. After 50 years of deconstruction and study since the first Nixon-Kennedy debate in 1960, the conclusion of students of human motivation is that debates rarely change minds but they simply reinforce what viewers already think.

So what’s all the fuss about Monday night’s face-off between Gov. Martin O’Malley (D) and former Gov. Robert L. Ehrlich Jr. (R)? Well, for one thing, these two guys really dislike each other and things could get a little testy. For another, these are two Alpha male studs that might really go at each other, short of coming to blows. Dare to dream. The odds are that nothing closely resembling that will happen.

The only interests who promote debates are underdogs and television stations—underdogs to gain exposure and attention and perhaps trip up the leader, and TV stations to bump the ratings and claim an hour of public service on their FCC license renewal applications. And why, it is fair to ask, is this first of possibly several debates being negotiated and sponsored by the Baltimore Jewish Council if, for no other reason, than to slip in a question or two about Maryland’s relationship with Israel? And how dare they call them debates when they’re really just boring job applications.

And to further remove the stuffing from the debate, the face-off is being taped at 10 a.m. for broadcast at seven p.m. Taping a debate in an empty studio sucks the oxygen right out of the canned affair. It’s like performing in an echo chamber. A live debate before a studio audience and a live TV audience increases metabolism and heightens the energy of the participants. There’s probably a cost factor hidden somewhere.

If Maryland is going into the candidate debate business on a steady basis, a debate commission ought to be established similar to the federal group to negotiate terms, conditions, frequency and locations of debates rather than leave them to special interest groups such as the BJC or the Citizens for Boysenberry Jam, for that matter. Two radio debates have also been scheduled and a second TV debate is being negotiated.

The truth is, five minutes after the gubernatorial debate is over, the average viewer won’t remember a word O’Malley or Ehrlich said. They’ll only recall how the candidates looked and sounded. Quick. Recall something Ehrlich said in his 2002 debate with Kathleen Kennedy Townsend. Can’t, huh? That’s because the event produced nothing noteworthy except the dubious charge that Michael S. Steele, seated off-camera, was pelted with Oreos. That was the big news out of the debate.

And all history really remembers about presidential debates are Nixon’s sweaty upper lip, Ronald Reagan’s “There you go again, Mr. President,” Gerald Ford’s terrible gaffe on Poland, Walter Mondale’s “Where’s the beef,” and Lloyd Bentsen’s “I knew Jack Kennedy, and you, sir, are no Jack Kennedy.”

Debates turn on the ability of candidates to project themselves in large metaphors that say honesty, integrity, sincerely, confidence. It’s simply a matter of who sounds better and who looks better. There’s lots of show but very little tell.

O’Malley and Ehrlich have been primed and rehearsed by consultants and stand-ins during mock debates to appear relaxed and in command of information. After all, they’ll be visiting in peoples’ homes. And if any news is going to be made, it’ll likely be during opening and closing statements and not in the actual give-and-take of debate, which can be mostly defensive.

The four most important lessons every candidate must learn about television debates are:

Ignore the question and say what you want to say.
Nobody remembers either the question or the answer, only how candidates look and sound.
The camera with the red light on is the one that’s on. Look right down the barrel. Don’t be shifty-eyed.
Don’t ogle the monitor.

Candidates like to be comfortable with their material. Despite panelists’ questions, the participants usually give speeches, instead of answers, that they have repeated hundreds of times and sound-bites that are lifted straight from campaign commercials. The risk is that over-familiarity can convey tedium instead of freshness and spontaneity.

The candidate with twitches, tics, blinks and other distracting mannerisms is at a disadvantage. Rubbing hands, crossing and uncrossing legs, shuffling papers, drumming fingers will transmit nervousness and have viewers fidgeting and squirming in their seats, too. For example, O’Malley has a way of smirking that is easily translated into arrogance. And Ehrlich often flails his arms like a helicopter about to take off. Neither is endearing.

Humor has no place in a debate. The candidate may think his lines are funny, but if viewers want a few laughs they can always flip to the comedy channel. Similarly, a debate is no place for a debate, and that’s part of the problem. No one in the viewing audience wants his favorite candidate to get beat up by a bully. Besides, mind your manners and don’t be rude in someone else’s living room. Bad manners cost votes. The point of the show is to appear gubernatorial and above rowdyism. And remember, the viewer in the corner tavern sees the debate differently than the person in the living room or den. The bar is where appearances really count because the sound is often turned down. If the sound is up, one provocative statement can start a Budweiser brawl.

Debates these days have a secondary purpose. They can indirectly serve to rally the base. In the new media world, both the O’Malley and Ehrlich campaigns will be monitoring the debate and lifting the sections that showcase their candidate. They will be zapped at the speed of light to the thousands of supporters on their lists with appropriate messages. It was President Barack Obama’s 2008 campaign that used the Internet to energize his base and every candidate since has tried to replicate the success.

The debate between O’Malley and Ehrlich is, like the campaign, a rematch of sorts after an early scuffle between the two over formats. Ehrlich tried to sucker O’Malley into a showdown on talk radio without a moderator, just the two of them, mano y mano. O’Malley would have none of it, because Ehrlich is clearly more comfortable with the unstructured, unfiltered venue in which he has worked at WBAL Radio since leaving office four years ago. Ehrlich resents middlemen who parse and interpret his statements. Moreover, talk radio audiences (and hosts) tend to be conservative which is Ehrlich’s political flavor (this month). O’Malley is skilled at caressing the camera after having dealt with the media for eight years as mayor of Baltimore and four years as governor. And as lawyers, both O’Malley and Ehrlich had to suffer through “Moot Court” during law school which is supposed to turn students into skilled debaters.

Debates are supposed to be the music of democracy, informative and illuminating. They provide a forum for an exchange of ideas and a contrast of views and opinions that are supposed to assist voters in choosing a governor. What the debates really prove is that lacking bread, the public will accept a reasonable amount of circus if it is well presented.