Liberal Elitism Is Not a Conservative Illusion

The upcoming midterm elections have put Democrats in an ornery mood. 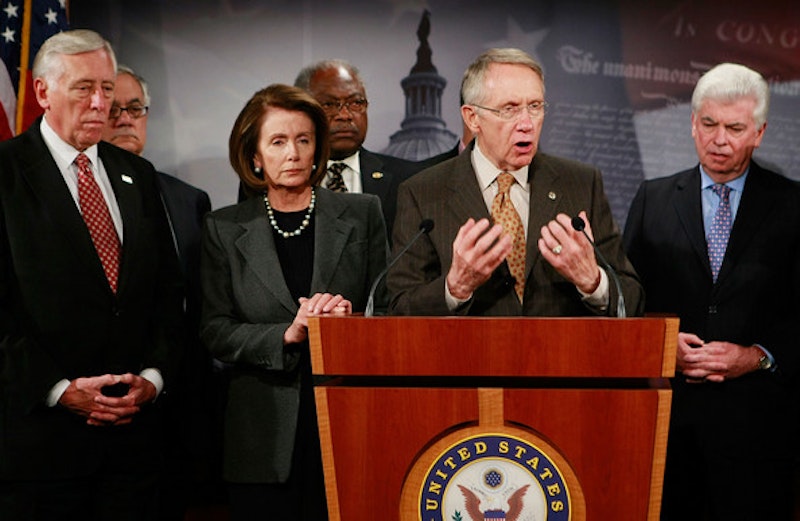 It’s not often that you encounter a politically and cultural left-of-center person who makes no apologies for his or her elitism. Michael Wolff, the iconoclastic columnist and author who may have more enemies than Bill O’Reilly, comes to mind. Usually, though, when someone’s accused of such leanings, he or she will protest, claiming that such a charge is downright outrageous. After all, the person inevitably points out, I contribute money to homeless shelters, mentor urban school children, might buy an electric car, vigorously support a government “safety net” for America’s disadvantaged and cherish the First Amendment, even if it means that Fox News is allowed to spew its venomous racism, Xenophobia and sexism 24 hours a day.

It could be that liberals—usually living in the Washington-Boston corridor or West Coast, but also in scattered urban areas throughout the country—are currently touchy, angry or frustrated, in the weeks before a likely Republican rout in the midterm elections. Unlike just two years ago when Barack Obama’s victory made the entire world feel fuzzy and euphoric, Democrats are despondent about the repudiation of everything they hold dear. The GOP was supposed to be a minority party for at least a decade, and this quick turnaround was not in the cards; after eight torturous years of George W. Bush, Dick Cheney and Karl Rove the current political environment isn’t fair. It’s the fault of poorly educated voters, who don’t understand they’re getting screwed by an entity some still refer to as The Man, and probably not reading about the impending electoral disaster on their iPads while waiting on an unemployment line.

Slate’s Jacob Weisberg wrote a fairly measured column on the subject of elitism not long ago, and while he strained credulity by claiming “Arrogance and paternalism remain bipartisan attitudes… Elitism, it seems, is in the eye of the beholder,” he effectively singled out examples of Republican candidates this year who are using the elitism trope to rally voters. Carly Fiorina, for example, the extraordinarily wealthy former CEO running to deny Sen. Barbara Boxer reelection in California, has said the American Dream is in danger because of the “elitists” in the government, echoing physician/Kentucky senate candidate Rand Paul’s charge that President Obama “believes he knows what’s best for the people” and won’t brook opinions that stray from his living-in-a-bubble orthodoxy. And Weisberg takes 2008 GOP presidential nominee John McCain—“the son and grandson of admirals, a millionaire who couldn’t remember how many houses he owned, accused his mixed-race opponent, raised by a single-mother and only a few years past paying off his student loans, of being the real elite candidate in the campaign”—to task for hypocrisy.

That’s a stretch: Obama, not yet 50, is a millionaire, and a graduate of Columbia University and Harvard Law School. I don’t care for McCain—and it’s worth noting that the elite media fawned over him in 2000, when he ran against Bush in the GOP primaries, for his alleged “straight talk” and his First Amendment-busting advocacy of campaign finance “reform”—but let’s put an incontrovertible fact on the table: if Obama, a first-term senator, were white, he wouldn’t have won the Democratic nomination in 2008. Weisberg, who calls elitism an “epithet,” buries his own elitist bona fides in the middle of his column: “Arguments for raising taxes, expanding health insurance, and fighting climate change are all met with by the rejoinder [by conservatives] that some people should quit telling the rest of us how to live our lives.”

An Oct. 14 New Republic editorial, “The Price of Tea,” is representative of the elitist liberal ideology. “There’s a strain of schadenfreude that often masquerades as political strategy. It leads rational, thinking men and women [Democrats] to cheer on opposing parties that nominate seemingly unelectable radicals and lunatics for high office… Candidacies like the Tea Parties’ have historically had the effect of transporting issues from the provinces of cranks into acceptable political discourse.” This sniffy passage ignores that sometimes the “lunatics” elected, like Ronald Reagan (the man Jimmy Carter wanted to run against in 1980), are later celebrated for their immense contributions to American society. Sure, Christine O’Donnell—and don’t be surprised if she wins in Delaware, current polls notwithstanding—appears unqualified, but Sen. Scott Brown, supported by Tea Party adherents, has not embarrassed himself since his election earlier this year, and Florida’s Marco Rubio is a “rational” man who has the makings of an excellent senator.

I don’t really get what all the fuss is about, for liberal elitism is a just a fact of life in the United States, and it’s both silly that conservatives still complain about it and liberals insist it’s a fallacy. Does anyone really doubt, after decades of evidence, that most of the mainstream media favors Democrats in elections and government? Lucid Republican candidates and strategists have understood this for years: just as they can usually count on financial support from large corporations and smaller donations from conservatives in “flyover” states, they’ll never convince The New York Times, the television networks, unions or academia that their views are even worth considering.

Although my political views are economically conservative, I can roll with both the elites and non-elites. While living in Manhattan’s upscale Tribeca, I didn’t at all care for media-centric, networking parties where almost every attendee was on the same page politically. The Times’ nanny-state admonitions (and the paper has an ally in New York’s mayor Mike Bloomberg, who apparently stays awake at night thinking of more regulations that limit personal choices) are so far-fetched you’d almost think they were satirical. But of course that’s not the case, for the Times preaches to its readers to lead a politically correct life. On the other hand, I also lose patience when cultural conservatives proselytize about the evils of gay marriage and abortion, or the impertinence of immigrants wanting to live in the United States.

You learn to live with the condescension of liberal elitists (and yes, of course, elitism isn’t confined to the left; I doubt many fellows at the Heritage Foundation would feel comfortable taking a drink at a dive bar or sitting in the bleachers at a ballpark) and move on. And at times, at least in non-election seasons, there’s a lighter side to this basic schism in American society. A few years ago, for example, a young friend—a recent graduate from a prestigious university who marches in step with Kos, Paul Krugman and the anti-Murdoch website Media Matters—heard a Bob Wills & His Texas Playboys CD I was playing, said he dug it, and wanted a closer listen. All was swell until the song “Take Me Back to Tulsa,” written in 1941, came on, and he recoiled upon hearing these lyrics: “Little man sucks the blossoms, big bee gets the honey/Dark man picks the cotton, White man gets the money.” He was horrified, ignoring both the era in which the song was released and his own revulsion at some schools banning books like The Adventures of Huckleberry Finn, in which the word “nigger” is sprinkled throughout the text.

The splendid writer James Bowman summed up the essence of liberal elitism in his October New Criterion column, “Bien pensants, maudit peasants.” Bowman began his piece with a few comments about the summertime flap over the proposed construction of an Islamic community center a few blocks away from the World Trade Center ruins (a fading issue today, replaced by other crimes against intelligent thought, but that’s still the downside of a monthly’s leadtime.) Bowman wallops The New Yorker’s Hendrik Hertzberg, who was indignant back in August about the mere existence of a controversy. “As Mr. Hertzberg was for [the Islamic center], so only fools or bigots (or, of course, both) could have been against it, in his view.” That would put me in the “fool” and “bigot” categories, as my own opinion was that such an endeavor, while worthy, might be constructed anywhere in Manhattan—close by, say on Canal St.—and wasn’t worth the understandable distress its proposed location would cause the families of those who perished on 9/11. I was repulsed by the demagoguery of opportunists like Newt Gingrich, to name just one, on the subject, but still think it’s a question of insensitivity.

Rolling Stone’s Matt Taibbi, a talented writer whose purple prose is leavened by industrious reporting, is a more flamboyant representative of the media’s left-wing elite. In a long article on the Tea Party, based on three extended visits to Kentucky, Taibbi dismisses the loose confederation of frustrated Americans like this: “[A]fter a lengthy study of the [Tea Party] phenomenon, I’ve concluded that the whole miserable narrative boils down to one stark fact: They’re full of shit. All of them… The average Tea Partier is sincerely against government spending—with the exception of the money spent on them.” Taibbi was struck that at one of the rallies he attended, where Sarah Palin appeared, giving him the “epiphany” that the “dingbat revolution… is nigh,” he didn’t spot a single black face in the crowd. That’s hardly surprising, since as of 2009, the black population in Kentucky was 7.9 percent.

One last note about my own brushes with liberal elitism. In the summer of 1973, as an 18-year-old anticipating college that September, I worked in a biology lab at Princeton University. My duties including mopping the floor, feeding the rats, emptying the trays of fecal matter and, once the students were finished with their animal experiments, disposing of the critters. One afternoon, I had to dispatch a bunch of monkeys and cats—using chloroform—outside the building near the garbage containers. It caused a stir among students milling about, and a number of them harassed me, yelling, “Animal killer!” It was a very weird moment: young men and women, just a few years older than myself, attacking a minimum-wage worker for doing his job, rendered further ironic by the fact that some of the protesters were, in fact, the very same people who were conducting the experiments on the animals. That’s elitism.