Taxation Without Representation, Retrocession, and the DC Problem

Our nation's capital: just another pawn in our cheap political discourse. 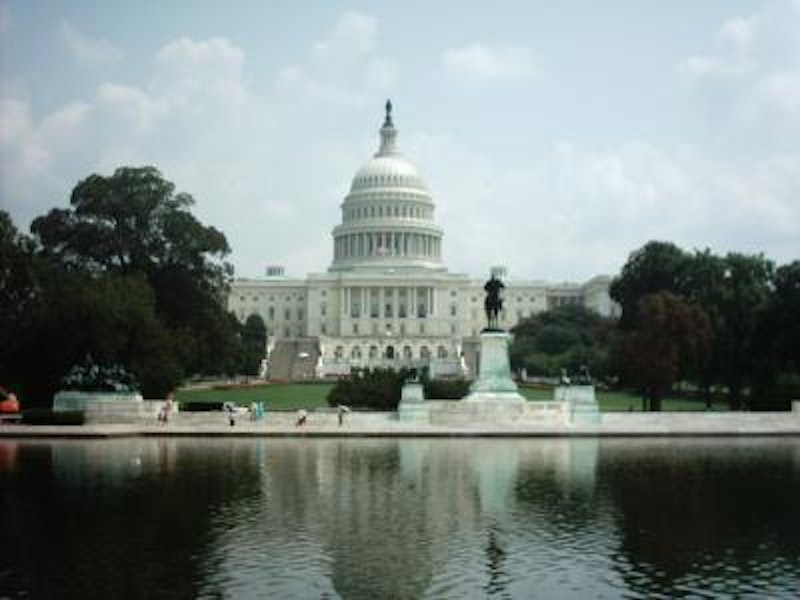 It’s been quite a while since I’ve seen, read or heard anything approaching appreciation or approval related to Newt Gingrich.
But, in David Weigel’s Washington City Paper profile Rep. Jason Chaffetz (R–UT), who, if Republicans take the House, will be the new “boss” of Washington, DC, there it is:

National Democrats are panicky by nature, and they’ve been fretting about a Republican takeover of Congress since late last year. [Non-voting DC Representative Eleanor Holmes] Norton is one of those rare Democrats who don’t talk down her party’s chances of holding onto power. She’s thought about it, though. She makes it clear she’s “on offense.” But she’s worked with Republicans well in the past: When Newt Gingrich ran the House, Norton says, he was “one of my best friends,” and “helped me immeasurably.”

That brings her to Jason Chaffetz.

Norton and Weigel don’t enumerate just how Gingrich was immeasurably helpful, but I take the Congresswoman at her word. If I wanted to be optimistic, the Gingrich of the mid-90s saw, in the issue of DC statehood, a classic case of local government uprooted at the expense of national politics. But, no:

“Republicans should always start with the idea that this is the national capital,” Gingrich tells Washington City Paper, “and we want to work in a way that makes it a showcase for the world of what America’s all about. Most of the policies we adopted worked—not just school choice, but gentrification, tax credits for buying houses in the city. If I was asked by the mayor, I’d be very interested in doing an assessment of what we could do to help the city.”

Okay, so Washington, DC is a fantastic place because it is a “showcase for the world of what America is all about”: a cyclical nightmare of partisan power plays. Chaffetz is quoted as saying:

“When you’re in Washington, D.C., you’ll see license plates that say ‘Taxation Without Representation,” says Chaffetz. “I think we all recognize that that is fundamentally flawed. But what’s paramount in this discussion is the U.S. Constitution, and the Constitution explicitly says that voting rights are reserved for the”—he quickly formed air quotes with his hands—“several states.”

My purist DC-native blood is done quickened: the political equivalencies are particularly galling; the hubris of willfully ignoring small government platitudes is eye-popping; the same plain text reading of the Constitution that undergirds Chaffetz’s defense of Congressional meddling also brings one to the conclusion that a Negro is three-fifths of a man. These objections seem the norm with national politics these days—blustering talking points decidedly at odds with action, and vice versa.

And yet Chaffetz and I agree on what is most likely the only politically viable solution for the DC Problem: retrocession. Specifically, Maryland: Leave the Mall and the Federal hardware alone as its own beast, whereas the rest of the city becomes “Washington, Maryland,” or some such. DC residents would vote for senators and state delegates and all the rest.

But Chaffetz—and, from what I know from personal experience, the DC statehood crowd—don’t really care about that solution. For the former, DC is a hard-right conservative’s dream come true: unaccountable governance of a city made up entirely of people who are not your constituents. Roll back marriage equality; roll back marijuana decriminalization; roll back everything you don’t like.

Republicans love to throw around the fact that DC shells out more dollars per public school student than anywhere else in the country—and with terrible test scores to show for it. What they don’t mention is that Congress controls the purse strings; every time a bill is proposed in DC, Congress gets an entire month to change it. It’s gross misgovernment on everyone’s part, but it is absolutely shameless of Congressional Republicans to willfully use the city’s educational/crime/disease data for cheap political points.

Chaffetz is a tall, smiling, winsome Republican who made a dog and pony show out of buying a foldout bed for his Congressional office. He doesn’t want to be in DC, he says, but since he must, he might as well do things his way—a more candid admission of callous politics than we’re used to seeing from the Right.