The Russians Want Trump for President Because Hillary’s So Weak 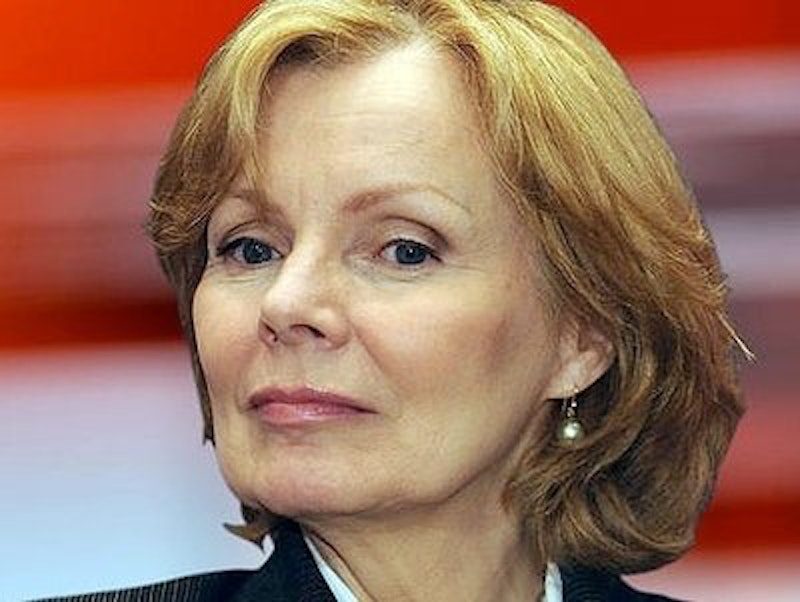 Peggy Noonan just had a big thought. With finger on chin, she mused herself into the following suspicion, namely that Vladimir Putin “views the current American political leadership class as utterly decadent and unworthy of traditional diplomatic norms and boundaries.” The thing is, she pretty much agrees with him. “Why would he find them decadent—morally hollowed out, unserious?” she says. “That is the terrible part: because he knows them.” You can guess the word that comes up next: Clinton.

Noonan has her mind on the Uranium One deal, which happened when Hillary Clinton was secretary of state. A Russian agency bought a Canadian company (that’s Uranium One) that owned U.S. uranium mines. A U.S. government committee allowed the deal to go forward. Nobody talks much about this body, which is called the Committee on Foreign Investment in the United States. Here’s something they talk about less: the committee is a committee, as opposed to being Clinton seated at a long table by herself. To quote The New York Times, the committee includes “the attorney general, the secretaries of the Treasury, Defense, Homeland Security, Commerce and Energy, and the secretary of state.” One reads that the assistant to the president for economic affairs is there too, and also the U.S. trade representative. That’s a lot of people.

This matters because, before the deal’s green light, a Russian investment bank that pushed stock in Uranium One had paid Bill Clinton half a million dollars for a speech. And the Canadian company’s chairman had given $2.35 million to the Clinton Foundation. “Whether the donations played any role in the approval of the uranium deal is unknown,” the Times said demurely. No word on what effect the speech payment had, though I guess the Times would’ve told us if they had something. The article’s long enough.

But Hillary was just one vote. How did payoffs—alleged payoffs—to one decision maker corral the votes of the 10 or so other decision makers? The Times never grappled with that question, and I doubt that Peggy Noonan even knows that the question is there. She goes straight to the Clintons, and what a hollow, doomy drum she beats. Noonan: “But nothing is more dangerous than this: that Mr. Putin and perhaps other world leaders have come to have diminished respect for the morality, patriotism and large-mindedness of our leaders.” You see that, aside from overlooking a key fact, she also makes a large assumption: namely that Putin would have respect for anybody’s morality, patriotism and large-mindedness. Remember, he doesn’t think much of people.

At the very start of her column, before getting onto the decadent elites, Noonan says, “It is quite dreadful and a showing of the gravest disrespect that, if U.S. intelligence agencies are correct, Russia’s Vladimir Putin has inserted himself into America’s presidential election… If Russia is indeed behind the leaks of the emails of Democratic Party operatives,” and so on. Note the peg. Looks like the Russians are trying to get the Republican candidate elected. That’s the news she’s responding to. The Russians want the Republican to get elected. So that means… the Clintons are bad. They’re weak, hollow. “What would Mr. Putin, knowing all this and inferring Mrs. Clinton’s real priorities, conclude about the American political system and its major practitioners?” Noonan asks. “Would he feel contempt? Might he toy with them?” But he isn’t toying with them. He’s trying to destabilize their system.

This April Putin talked about the Panama Papers, the giant hack that revealed, among other things, that friends of his were hiding a couple of billion dollars in various shell companies. As far as Putin’s concerned, the U.S. was behind the release of the information. He said so: “Officials and state agencies in the United States are behind all this.” He said the Americans want “to spread distrust for the ruling authorities and the bodies of power within society," meaning Russian society. His remarks were public; in fact he made them at a media conference. Esquire wrote up the news in a long and alarming article, which is the only reason I happen to know it. Peggy Noonan may never see Esquire, but couldn’t somebody tell her?