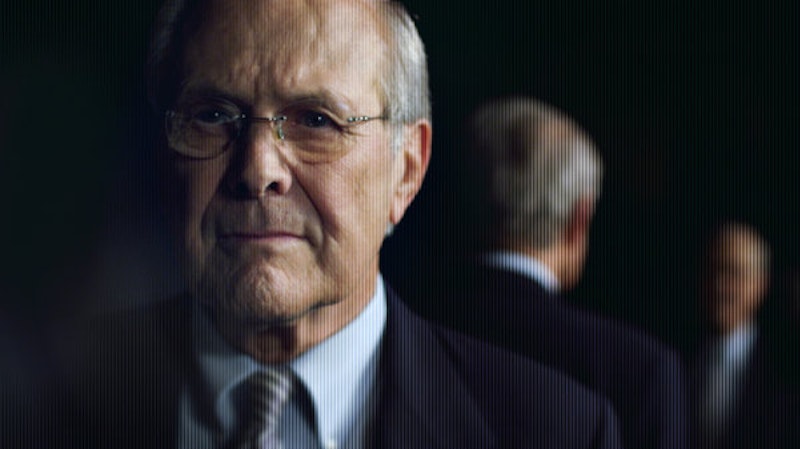 Why did we invade Iraq? What lessons can we learn from this foreign policy disaster? Andrew O'Hehir, in a recent piece at Salon looks to find the answer in the nexus of charm and spite that is our former defense secretary, the unrepentant Donald Rumsfeld. In a conversation with Errol Morris, who has filmed a long interview with Rumsfeld, O'Hehir muses that the ascendance of Rumsfeld illustrates the "decay of public life." He further suggests that Rumsfeld's brand of obfuscatory bombast—the "unknown unknowns," the suggestion that Pearl Harbor was  a "failure of imagination"—are the bastard offspring of our philosophical fall from empiricism. "He’s, like, the Republican cognate to the discourse of contemporary philosophy, to postmodernism and post-structuralism, where there’s a rejection of any ontological or epistemological certainty," O'Hehir propounds. To which Morris responds, drily, "He’s imbibed something."

O'Hehir doesn't bring any particular rigor to his lament for our fall from intellectual rigor, so it's difficult to know what sort of decay he's talking about. Nor is it clear how exactly he thinks that Derrida or Foucault or Zizek or whoever are implicated in a Rumsfeld dictum such as "the absence of evidence is not evidence of absence," an aphorism that has more to do with Christian apologias than with highbrow Continental philosophy. No doubt Rumsfeld himself would say that such details don't really matter, though Morris might be less forgiving. "The real issue," Morris says, "is between truth and falsity. I believe something. Is it a true belief or a false belief? What are my justifications for what I believe? It’s separating knowledge from nonsense. But whenever Rumsfeld is asked to do that, he retreats into some kind of meta-talk, some kind of pseudo-sophisticated, philosophical babble." Policy is an empirical matter, to be tested by evidence and reason. The clear light of knowledge will guide us from this decay, past those French shilly-shallyers, and on to the justice of enlightenment.

The facts suggest, then, that the 2003 invasion of Iraq was not a strange aberration resulting from the decline of our public discourse into postmodern balderdash. The United States was not some sort of beacon of military restraint and prudence before Rumsfeld got the reins of the military-industrial establishment. Blissfully self-righteous bullies with guns from Wilson to Johnson to Reagan have been putting little American flags in their hats and tromping into other people's backyards for as long as there's been a United States and as Native Americans will tell you, even before the United States existed. We like military invasion. We started the country with it, we've had a lot of practice with it, and we intend to keep on keeping on.

Rumsfeld is an evil man and a fool, and if O'Hehir and Morris want to kick him, together or alternately, I say godspeed. I'll be happy to watch Morris' Rumsfeld documentary if I get the chance.  But I think it's important not to get too hung up on this one defense secretary's particular stupidity or philosophical shortcomings. We didn't invade Iraq because we enjoy Rumsfeld's bullshit. We swallowed Rumsfeld's bullshit because we like invading places. The real question going forward isn't why did we invade Iraq? The real question is, where will we invade next?