The Room Where Nothing Happened 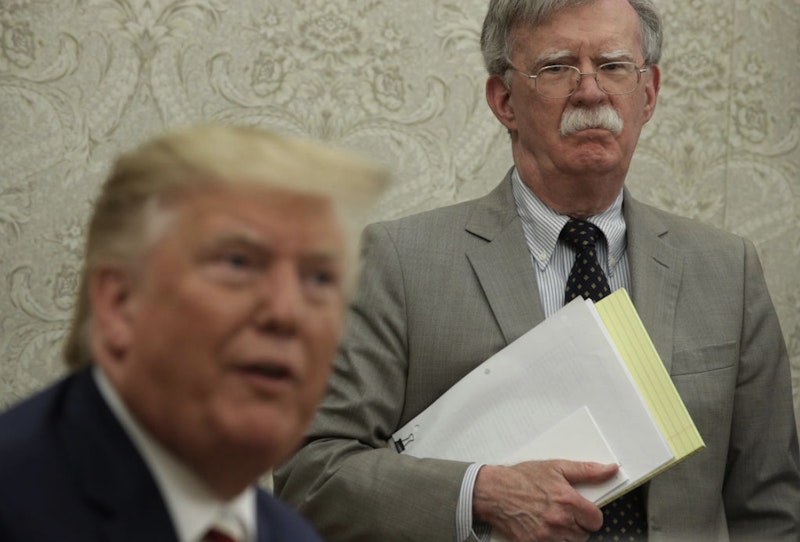 The TV show Patriot depicts John Tavner, a CIA officer at the center of a web of screw-ups and coincidences that radiate violently through Luxembourg. Tavner’s father and handler, a smarmy agency careerist, goads his son through the escalating crimes against sometimes-innocent bystanders—robbery, shooting, stabbing, bludgeoning, even the abduction of a detective’s young child. The ostensible mission has something to do with stopping Iran from developing nukes, but geopolitics figures in the plot only sporadically. Mostly, each episode of catastrophic mayhem just follows the previous one.

In the hands of a writer more skilled than John Bolton, The Room Where It Happened could’ve had the same mood of depraved resignation that makes Patriot so darkly hilarious. Instead, Bolton’s memoir about his 17 months as national security adviser resembles the minutes from a convention of the world’s most self-important people. In an early passage, he professes not to be “deeply interested” in Freud. But his tepid writing style made me wonder if he was trying to make up for his own bloodlessness by spilling other people’s. Highlights of his decades-long career in public service include: during the Reagan administration opposing Congressional inquiries into the Iran-Contra debacle and well-established involvement of U.S. proxies in the drug trade to fund a war on the left-wing Sandinistas in Nicaragua. Even before 9/11 he was advocating war with Iraq as part of a now-defunct think tank inanely called the Project for a New American Century. He remains unapologetic about the ongoing destruction of that country.

Bolton’s history of acting as a kind of drum major for war crimes didn’t hurt book sales. In fact, the same people who failed to hold him accountable during previous administrations essentially advertised his book for free. Testing the limits of self-parody, The New Yorker declared the plodding text a “revelatory account of Trump’s ‘stunning ignorance,’ incompetence and corruption” (qualities of Trump’s which anyone has been able to observe for themselves for the last five years or so). CNN—which hosted him for a series of friendly interviews—reported the book had sold at least 780,000 copies as of July 1, the week after its release. It probably helped that Trump himself joined Bolton’s ad hoc PR team by having the federal government sue to block its release. The only real “secret” of this presidency is that it’s a marketing campaign, even when Trump’s attempting to do the opposite.

Thus the humor in the book is unintentional. It occurs in parts where Bolton lets on that he fancies himself superior to the media that so enthusiastically promoted his memoir, as when he scoffs at the public image of former colleagues H.R. McMaster, Rex Tillerson and James Mattis, who opposed Trump’s decision to break his predecessor’s so-called Iran Deal and earned “the plaudits of an adoring media as an ‘axis of adults,’ restraining Trump from engaging in wild fantasies. If only they knew.” (Bolton glosses over the real meaning of the “economic sanctions” ultimately imposed against Iran when the deal was broken. The restrictions on oil exports now act as a choke collar on the country’s ability to contain the coronavirus outbreak, which has killed more than 11,000 people there.) A New York Times article contains “even more than the usual quota of mistakes.” The Washington Post ran contradictory articles on consecutive days: “All this confused press coverage reveals both the inconsistencies within Trump’s own thinking, and reporting based on both second- and third-hand sources, exacerbated under a President who spent a disproportionate share of his time watching his Administration being covered in the press.”

Bolton’s right to criticize the class of people who keep treating him like a credible figure, but an author with more self-awareness would notice the “inconsistencies” of his own relationship with them. This is the man who spent election night in 2016 at Fox News, Trump’s favorite network, “waiting to comment on air about ‘the next president’s’ foreign-policy priorities.” Later, he submitted op-eds to The Hill as a way of influencing Trump’s policy toward Iran.

This disdainful symbiosis isn’t all that Bolton shares with the press. Like most national-security reporters, Bolton writes about workplace personality conflicts as if they’re clashes of civilizations, instead of discussing the real consequences of the policies in question. His frequent disagreements with Mattis might as well be a feud between two cubicle mates, each of whom keeps reporting the other to HR for stealing his lunches. When he does try to write about events that take place anywhere other than the Beltway, Bolton embarrasses himself. Right after a passage about the multilateral civil war in Syria, he explains how he responded when Trump talked about wanting to withdraw from Afghanistan:

The argument I pressed again and again, regarding all the “endless wars,” was that we hadn’t started the wars and couldn’t end them just by our say-so. Across the Islamic world, the radical philosophies that had caused so much death and destruction were ideological, political as well as religious. Just as religious fervor had driven human conflicts for millennia, so it was driving this one, against America and the West more broadly.

“Radical philosophies” are ancillary to the real questions when it comes to those wars. Take recent history in Afghanistan, where the U.S. invasion killed tens of thousands of people while allowing the Taliban to gain more territory than it had to begin with.

Bolton could’ve learned something useful if he’d paid attention during the 1980s, when he occupied various posts in USAID and the Department of Justice under Reagan. During that period, the CIA and allied Saudi government backed the insurgency that was fighting the Soviet occupation in Afghanistan. The CIA covered its support for the resistance by going through the ISI, the intelligence service of neighboring Pakistan, to create a leaky pipeline of money and weapons to the mujahideen. Even so, the war proved so expensive that the ISI and mujahideen turned to drug smuggling to cover rising costs, as journalist Loretta Napoleoni documents in her book Modern Jihad. The ISI helped the mujahideen build laboratories that made the border areas of Pakistan and Afghanistan “the biggest centre for the production of heroin in the world” within two years and the main source of street heroin in the United States, with profits “estimated between $100 billion and $200 billion,” Napoleoni writes.

If Bolton wanted a truly “revelatory” book, he could write a detailed account of how the U.S.-Taliban war is affecting the heroin trade today, since those details are still murkier. The Haqqani network, one of the groups the ISI supported during the anti-Soviet fight, is now both a major smuggling operation and part of the Taliban. The U.S. government insists that the heroin on U.S. streets comes almost entirely from south of the border, and that Afghan heroin winds up in Western Europe instead. But who knows? Last year, federal prosecutors had Haji Abdul Satar Abdul Manaf, a reputed Haqqani associate, extradited from Estonia to the United States to face charges he tried to have “hundreds of kilograms of heroin” smuggled into New York City.

The larger point is that to act like ideology is anything but incidental to other reasons for political violence is to underestimate the capacity of people, especially young men, to glom onto something that makes them feel important and righteous. Extremists don’t get very far unless they make themselves useful to the rest of the global economy by doing things like buying weapons, acting as a shell for the drug trade or destabilizing a market for someone. Bolton and his fellow travelers could do a better job of preventing terrorism—or whatever they claim they’re trying to do, it’s never really clear—if they stopped relying on sanctions and military campaigns against unfriendly governments, and instead enforced requirements that banks ask meaningful questions about whose money they’re really handling. His pretense not to know better should be an act of criminal fraud, but instead it goes unnoticed because it’s taken for granted by people nursed on the Mickey Mouse depictions of mass violence that are presented on cable news and spy shows.

The Room Where It Happened really doesn’t matter. Bolton is far from the only professional moral imbecile who’s taking advantage of the moment’s chaotic news cycle to regain some kind of fleeting relevance. In June, as Black Lives Matter protests multiplied across the United States, Bolton’s frenemy Mattis gave a canned interview to the Atlantic. The former Defense Secretary made the anodyne point that Trump had failed to “unite” the country. The week after, David Petraeus’byline appeared on an article for that magazine in which he called for no longer naming military bases after Confederate generals. Editors were apparently too polite to mention the former CIA director and Army general’s 2015 conviction for leaking classified information during an adulterous affair, or his current job with the private-equity firm KKR, whose global institute he chairs.

This is the essence of the status quo in which people like Bolton keep getting to fail and lie their way from one position of influence to another. It’s one in which Petraeus—whose difficulty with keeping his state secrets in his pants is a matter of public record—can sail into a job at an investment company with stakes in everything from Chinese pet food to Emirati oil to pharmaceuticals, and no one makes a fuss. In Donald Trump, they’ve found someone who matches their talent for avoiding accountability, and their pointing of fingers at each other is hardly instructive to anyone. None of them should be rewarded for pointing out the obvious.