I’m rooting for the Governor, but the pro-Obama media is too huge an obstacle. 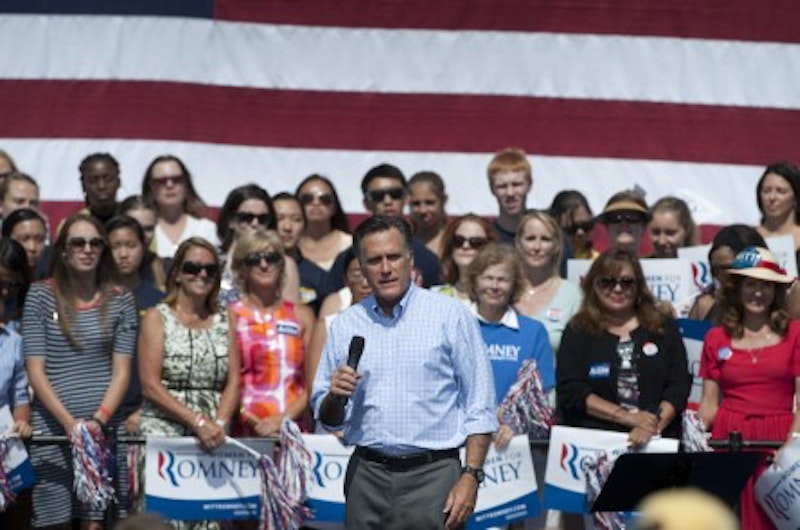 Although the Romney campaign is in better shape than even a week ago, my gut tells me the bump/surge is waning.
Not to sound whiny, but I don’t think it’s inaccurate to claim that the mainstream media have reached unprecedented levels of bias and malfeasance during this election cycle. How or why it continues to amaze me I don’t know, because I’m not naïve, yet I still have found myself taken aback by it—it’s somewhat stunning. From the absolutely breathtaking refusal of many in the media to cover the Benghazi story with the intensity and attention it deserves (can you even imagine how this would have been covered if it had happened during the Bush presidency?), to the continual willingness to parrot the Democratic talking points in the course of “reporting,” the uphill battle Romney faces in challenging an incumbent (weak though he may be) is made nearly impossible when the headwinds of the media’s behavior are piled on top.

If Romney loses, I think it will be almost entirely the result of the infamous “47%” video. There would be a litany of other reasons for a Romney loss, but I think that’s the biggest and heaviest monkey on his back, and that the timing of its release (in the wake of what the media successfully designated a “good” convention for the Democrats) was devastating. I hope Obama brings it up in the next debate on the assumption that Romney and his campaign have crafted a solid response to it and get it behind him. Last week, I worried about the campaign’s ability to properly prepare Romney for the arrows I assumed would come his way from the President about the 47% video, Bain and taxes—largely because during many of the primary debates Romney was often caught flat-footed when confronted with attacks that should have been easy to predict and preemptively prepare to rebut (e.g. regarding his tax returns). The extent of his domination last week, however, gave me newfound confidence in whomever from Boston did the lion’s share of coaching Romney, and so I now have cautious optimism that he has effective and substantive rejoinders in his back pocket he’ll be ready to deploy if needed.

It’s likely the President will come out swinging next week, but I think that carries a lot of risk for him. For one, I don’t know that the “town hall” setting is one that’s naturally conducive to adopting a more aggressive and combative tone. In addition, his so-called “likeability” remains an important part of his standing in the polls, and he has to walk a fine line between being appropriately aggressive without coming across as a total prick. So, if Obama overcompensates for his disastrous first debate, there’s a chance it could backfire on him and lead to further erosion in his poll numbers. Were that to happen, Romney might legitimately become a favorite to win.

But again, even if that happens, enter the media. We know that they’re going to do everything they possibly can to ensure that a pro-Obama spin emerges from whatever happens Tuesday night. To the extent they’re successful in that effort, the President will benefit and may indeed see a bump in the polls. If that bump comes, Chicago and its media enablers will return to the efforts they were aggressively pursuing pre-debate to cement the notion that the election is wrapped up for Obama. Even if that isn’t the case, it’s a powerful tool and it can easily become self-fulfilling.

It depresses me that (evidently) at least half the country wants to give Obama another four years. Yes, I’m biased against him, but even in trying to adjust for that bias, I can’t fathom how a neutral observer could look at Obama’s record and conclude he deserves another term. Obama isn’t even running on his own record (or lack thereof)—he’s running a campaign that is entirely based on vilifying and denigrating his opponent. When is the last time an incumbent president ran a campaign like this? Ever? I know George W. Bush went after John Kerry pretty hard in 2004, but at least Bush was able to say that he “kept us safe” since 9/11. There is nothing Obama can say about his first term that will help his electoral prospects. Is that unprecedented? (Or rather, will it be unprecedented in the event he wins?)

As for tonight’s veep debate, I think it’s unlikely it moves the needle much. That said, the confidence among Republicans about Ryan’s chances has reached the point of downright cockiness. This worries me. The expectations for Ryan are stratospheric, and it appears many in the GOP feel confident he’ll be able to reduce Biden to a drooling vegetable. That’s not going to happen. It’s important to remember that Biden’s been a senator for 172 years—he knows how to debate, and when he’s on his game, he can be fairly effective. I feel confident Ryan will hold his own tonight, but I don’t think he’s going to wipe Biden across the floor. I’m not counting on a typical Biden gaffe.

I’m trying to keep a brave face with colleagues and friends who are pro-Romney. I don’t want to fall victim to (much less perpetuate) the attempts of the Obama campaign and the media to discourage and depress Republicans. But in my gut, I think this last week—which has been wonderful—will ultimately end up as an aberration, and that somehow, this absolute failure and empty suit of a president will likely win reelection. If that happens, it will be a very sad day for our country and its future.