A Boob, But Not a Fool: Joe Biden Brushes Back Paul Ryan

How do you push back without seeming angry? Just have a big mouth. 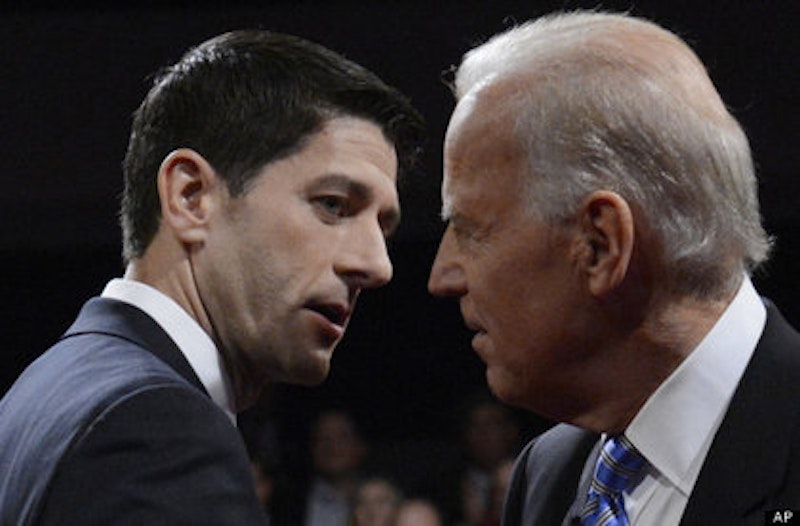 I liked Joe Biden's smile. I got a kick watching him on his side of the screen, rolling his eyes and relishing the latest good one from Paul Ryan. Twitter indicates that people, some people, are making fun of Joe and his grin, or ”smirk.” When it comes to reading last night's debate, the battle will be over the Biden rampage: good fun in the service of truth, or a display of “jackhole” behavior? (I quote a quietly seething Allahpundit.) I think most viewers will decide it's the first, but I'm a Democrat. CBS says Biden won big among undecided voters, but CNN says Ryan edged him out among voters overall.

My bet stays on Joe Biden. Republicans have fooled themselves about him. He's a boob, not a fool. A smart, pugnacious man with no sense of dignity can do a lot to get the truth out there. Biden did it last night. It would have been one thing if he had rambled, but he kept his answers targeted and clear. Not all the time, but more than enough to dominate the evening. Listeners resent interruptions when these snarl up communication. Biden's interruptions resulted in more communication.

His message dropped atop Ryan's, whole and in one piece and with a lot of “c'mons” and a cut-the-crap air. A lot of people wish they could talk that way.

Half the stand-up comedians in the country do this bit about the regular guy speaking up to knock everybody's brain clear with a little common sense, to straighten everybody out as to the common sense of the situation. On Saturday Night Live this weekend, viewers will watch Jason Sudeikis squirming about and smiling and interrupting, and they won't feel irritated, they'll feel comfortable.

Crazy Joe comes out with what needs to be said—that will be the sense that develops, I think. He was aggressive without seeming hostile. He was a loudmouth but didn't seem angry. Analysts said he had to find some way to call Paul Ryan a liar. He found plenty, and they all made him sound like he was having a good time.

1970s Hollywood comparison. Paul Ryan hung in there. His voice got thin at times, and he had a way of reshuffling the same buzz phrases when a question got onto its second round. (The habit reminded me of when Chris Wallace went at him about the math behind the Romney tax cuts. Ryan yelped “Revenue neutral!” a couple of times, like it was the rope that would pull him out of trouble.) But he did his earnest-eyed communication about as well as he usually does, which means he performed better than most politicians can hope to.

He's a clever man and a beautifully gifted political actor. Right now he's playing an earnest young scholar who can read disturbing trends in our national ledger. In the years to come he'll play all sorts of roles, each one with its handy apocalypse and its line of portentous bafflegab. (“The Taliban and the terrorists and the Haqqani and the Quetta shura”—Jesus! Biden had to crow back his head and laugh.) He will fasten on profound crises that will dwindle into procedural commonplaces. But nobody will notice the dwindling unless there are people ready to dangle behind him like tin cans clanging out the truth. Biden did it last night. (“We're sending in more Afghans to do the job, Afghans to do the job!” he bellowed when Ryan talked gravely of how there were fewer Americans to hold down a particular Afghan hellhole.) Lots more people will have to do it in the future, because Paul Ryan is not going away.

He's like Robert Redford when it comes to acting ability and style: a smooth, understated performer who inhabits a role. Whereas seeing Biden last night was like watching Jack Nicholson on a talk show. He's there, the old Adam: grinning from his pile of chins, happy as a cat feeling the breeze, just a guy saying “Hiya” to the world. What does he have on his mind? Well, he can tell you, and he does. “That's a bunch of malarkey!” Biden says. I think it worked.

Obama-Romney preview. Look for Mitt Romney to do a Karl Rove during the foreign policy debate. He'll go after the president on Osama bin Laden, dredge up the old Fox News talking point that Obama spoiled intelligence gains by doing a victory lap. The intent will be to stun Obama into outrage, which can then be spun as petulance. Just a big child, really, a preening showoff. Why, he killed bin Laden just to look slick.