Paul Ryan and the Poor

Hypocrisy is a politician’s tool. 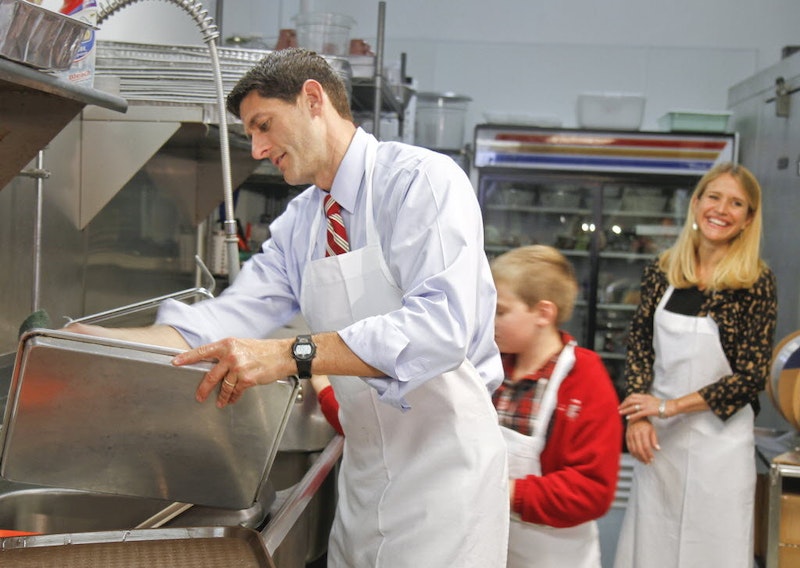 Making fun of political hypocrisy is fun. New York’s Jonathan Chait has a jolly time sneering jovially at Rep. Paul Ryan's secret sympathy for the poor. As Chait says, reporters keep describing Ryan's poverty tours issues as "quiet," even though "they leak out in the media, over and over again." Ryan visits inner-city neighborhoods with a low profile, and yet somehow The Washington Post reports on it. Recently, the public found out when, despite that commitment to secrecy, images of Ryan doing good work among the needy appeared on Ryan's twitter account.

Gotcha moments are fun for everyone. They show that Ryan is a hypocrite, spinning his secret love of the poor as a personal commitment when, obviously, it's all about the photo-ops and the publicity whoring. And hypocrisy is the favorite cast-the-first-stone-sin, because it's so clear. Corruption and even sex scandals all involve issues of fact and interpretation and law and morality. But for hypocrisy, all you need is to find the accused saying one thing, and then doing the other. Ryan's spin team says he's secretly visiting the poor; then we see him tweeting pictures of himself visiting the poor. He's a slimy, lying doofus. Case closed.

Maybe Ryan is a slimy, lying doofus. But isn’t that a central part of the job description? Politicians aren't expected to be genuine. They're supposed to represent a constituency, which means that when the people who elected them say do thing x, they do thing x, whether or not thing x is what they believe. Obama was against gay marriage, then the polls swung around and he was for it. Romney was for health care the Obama way, then conservative opinion swung around and he was against it. Does that mean that they are both hypocrites? Yes.

The twist here is that one way to get elected is by convincing everyone that you are genuine. This is what Ryan is trying to do when he trumpets his furtive interest in the poor. He wants be elected president. Chait does not want him elected president, and is pointing out that he is a slimy self-promoter. Chait is correct, because all politicians are slimy self-promoters. If you want to vote for someone who is genuine, you need to write in a name. Nobody on the ballot is going to qualify.

Beyond that, though, Chait argues that it's not just Ryan's secrecy that's hypocritical, but his interest in the poor itself, since Ryan's "entire career has been devoted to policies that would, as first-order effects, increase the incomes of the rich and decrease the incomes of the poor." Chait says that Ryan's "signature vision-statement budget plans would impose massively disproportionate cuts on programs for the poor." Ryan may go to soup kitchens, but he hasn't changed his basic philosophical position, which is that programs that keep the poor out of soup kitchens should be scaled back.

It's true that people concerned about poverty shouldn’t support Paul Ryan for anything, much less president. But it's also true that hypocrisy has its own value, at least as a diagnostic. Ryan and the GOP have tried to figure out a way not to look like heartless bastards who only care about the rich. And they need to do that because the Republican Party is currently the party of heartless bastards who only care about the rich. But that truth is not a winning truth, and so we get hypocrisy, as Ryan pretends to give a crap about people who make less money than he does. Right now, that hypocrisy only extends to photo-ops. Ryan's hypocrisy is not believable, but it should be encouraged.  Which is what Chait is doing by pointing out that he needs to give us a better performance. Ideally involving a craven, transparent, abandonment of his beliefs in the name of getting more votes.