Why she’s the wrong choice. 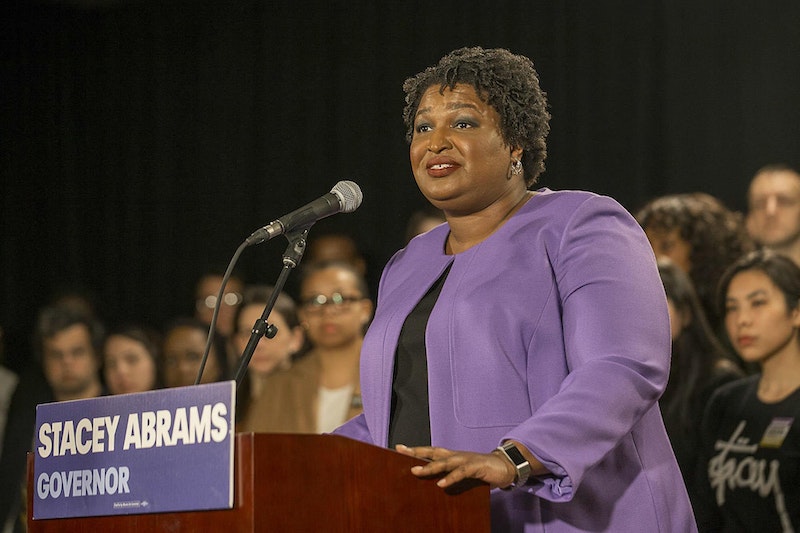 Usually prospective vice presidential candidates deflect when asked if they want to be chosen. They pretend they’ve never entertained the question, and act flattered and humble. But failed Georgia Democratic gubernatorial candidate (cheated out of the election, according to Democrats), Stacey Abrams, isn't playing that game. At this rate, it may not be long before we see the 45-year-old former Georgia House Minority Leader on the sidewalk in front of Joe Biden's house carrying a placard that says, "CHOOSE ME!" while the media she's invited jostle to get the best camera angles.

Abrams has said publicly, "I would be an excellent running mate." She's got a resume-like spiel prepared in her mind that she can recite on cue when asked to cite her qualifications. Most Democratic voters have only a vague acquaintance with Abrams, so she knows she needs to get out ahead of the game.

Had Abrams won her 2018 race against Brian Kemp for the Georgia governorship—the election she lost by 50,000 votes, despite Oprah taking to the streets to stump for her—she wouldn't have to work so hard. As the first black female governor in American history, she'd be a political star at this point—someone who'd perhaps choose not to hitch her wagon to Joe Biden's fading star in order to preserve her political capital for the future. But her second-place finish and Biden's announcement that he'll choose a woman as his running mate are now making the vice presidency look pretty good.

The loss, however, did little to diminish her star power among the progressive/activist wing of the Democratic Party and the media, who joined their chosen candidate in claiming that she was the victim of voter suppression. Kemp was Georgia secretary of state as he campaigned against her, and there's some evidence that he used his position to direct an effort to purge voting rolls, disenfranchise minority voters, and deny and delay new registrations.

Abrams has carried herself as a winner ever since she lost in 2018, and she's managed to win over the media. CBS This Morning co-host Gayle King had Abrams on the show recently and said, "Everybody knows you're extremely qualified," just like the media used to talk about Hillary Clinton being qualified. A New York Times op-ed on April 14—"It's Obvious Who Joe Biden Should Pick as Vice President"—is a good illustration of how the media's cheerleading for the Yale Law School grad. The writer, podcast host Steve Phillips (a friend of Oprah), uses the word "obvious" as if his chosen VP candidate had won in Georgia in 2018. He thinks Abrams can compensate for Biden's "enthusiasm gap"—the one that helped sink Hillary Clinton in the key states of Wisconsin, Michigan, and Pennsylvania in 2016. The writer doesn't mention that Clinton didn't bother to campaign in Wisconsin, and that Biden has more appeal to black voters, from his eight years as Obama's vice president.

Phillips also writes that Biden needs Abrams to secure the youth vote, while admitting that Biden beat Bernie Sanders "handily" in the Michigan primary without the support of younger voters. You can't count on the youth vote for much of anything because not many of them vote. Phillips also claims that, because Latinos preferred Sanders to Biden in the Democratic primaries, Biden needs Abrams to deliver the Latino vote. But Abrams is not Latino, and Latinos are not Bernie Bros. They haven't threatened to shun the Democratic nominee if their candidate isn't nominated.

Abrams has achieved single-name recognition within coastal-based party circles. "Stacey," they say, can give Joe Biden the edge he needs in marginalized communities come November. Biden's feeling the pressure. He misplayed his hand with his premature announcement that a woman would be his running mate. Had he held off, the only pressure he'd be receiving now would be to pick a woman, and he'd be in a less delicate situation.

Abrams is trying to badger Biden into picking her. The presumptive nominee's strength is being tested. "Elect me because look who I got pressured into running with" isn't a strong message for a presidential candidate. She implied, on The View, that not picking a black woman would be a slap in the face to black voters, which is a bullying tactic. But picking Abrams would be like an NFL team with a top quarterback choosing another QB in the first round of the draft, because Biden's already shown he can bring black voters to the polls—it’d be a wasted draft pick.

Biden, 78, would be the oldest person elected president if he wins in November. This adds significant weight to his VP pick, especially since he's not wearing his age very well. Abrams doesn't offer him the clout he needs. Someone like Amy Klobuchar would be helpful in winning those key states that Steve Phillips wrote about. Her profile rose steadily as she performed well in the debates, she's been a U.S. senator for 14 years, and has the Midwestern touch.