The Night of January 6th 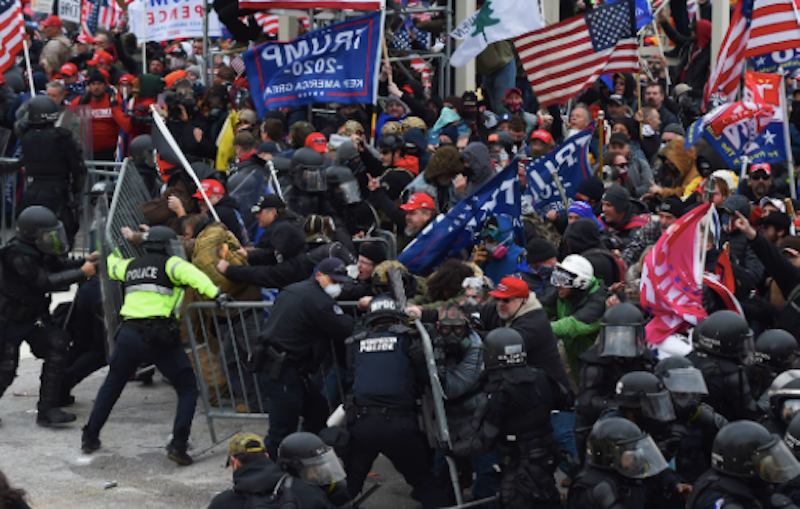 The cop who on January 6th this year shot and killed unarmed protestor Ashli Babbitt at the U.S. Capitol was interviewed last Thursday by NBC’s Lester Holt. Lt. Michael Leroy Byrd (an MLB who looks a bit like MLK, ironically) told Holt, “I believe I showed the utmost courage on that day.” He said he heard reports, though they were later proven false, of shots fired onto the House floor, leading him to shout orders to stand back at protestors who were trying to get through the doors that were the House floor’s last physical line of defense. “She was posing a threat to the United States House of Representatives,” Byrd explained.

Babbitt’s lawyer notes she wasn’t holding a weapon, even if she was part of a crowd, a few members of which had engaged in vandalism. But Byrd says the presence or absence of a weapon didn’t affect his decision. In other words, he admits he would’ve knowingly shot an unarmed woman, aiming for center mass—but in reality hitting her in the head, from mere feet away, fatally.

Holt asked Byrd if he’d as aggressively defend Trump—who some blame for the raucous protest that day—and Byrd replied, “I sure would because it’s my job.” An almost smiling Holt asked how it felt hearing some exonerating claims that Byrd may have saved congressional lives that day, and Byrd replied that it’s “rewarding and refreshing to hear that,” that he still loves his job, and that he looks forward to returning to it.

Well, stupendous. Case closed, then. It’s still fair to wonder, though, just for starters, how the dialogue on this topic would sound if Byrd were white and the unarmed female protestor shot in the head at point blank range without much warning were black. I’m guessing the Jan. 6th protest would’ve ended up much more fiery in that case and would’ve been followed by other protests, whereas most sympathizers with this protest seem to have gone into embarrassed silence.

But the verdict on what Jan. 6th meant is, in a sense, no biggie. I think most conservatives—as opposed to the real hard-right rabble-rousers and rabble—are willing to let this one slide. Most conservatives are well-behaved. They want their country to function, not be subject to periodic upheaval. That’s mature.

It’s hard to let it lie, though, when a congressional committee presses onward in its investigation of the Jan. 6th mob, threatening to widen its accusatory net to include sympathizers, politicians major and minor, and members of press who did little more than hype the anti-electoral fraud rally earlier in the day, which is surely no crime in itself. Speaker of the House Pelosi has been involved in subpoenaing members of the media less complacent than Holt about the Babbitt shooting—and less enamored of Congress than Officer Byrd.

Let’s hope, for entertainment’s sake, all this is resolved by a nice long chunk of congressional hearing testimony from populist radio host Alex Jones, who I’m sure would not duck that summons.

A warrant for the arrest of one of the other hosts from Jones’ site, Owen Shroyer, has been issued merely because he stood adjacent to the riot, as politicized journalists often do. The fact that he’s probably loving the attention doesn’t make the crackdown just. A judge has already requested an explanation from the Department of Justice of its reasoning in arresting Shroyer and yet so few others from the massive crowds in DC that day, crowds that produced little violence, all things considered, despite the short, choppy, confusing violence highlights reel the congressional investigating committee slapped together.

It sounds increasingly likely that the committee will conclude, as the FBI has, that there was no organized plot to overthrow the government—no “insurrection,” despite the establishment’s love of that accusatory term. And after all, what do sane people think would’ve happened even if the protestors had run amok for another three hours or had stopped the electoral vote-counting that was going on in Congress’ chambers? Does anyone think we were close to the government giving up and going away? I don’t think humans would stop governing each other even if the whole of DC were vaporized by a comet strike. Government was never likely to go away because of a minor riot on the House floor.

If it makes you feel better, I don’t think the incident needs to be as divisive as the establishment would like to pretend it is (they’ll pretend anything to keep us from noticing that the real divide is the establishment vs. the rest of us). Much has been made of the contrast between reactions to last year’s BLM riots and this year’s riot culminating in the shooting by MLB—but shouldn’t the leftist and right-wing protestors alike by now be in a mood to defund the police, perhaps even to defund the whole government? That would eliminate the perceived need to burn or storm anything.