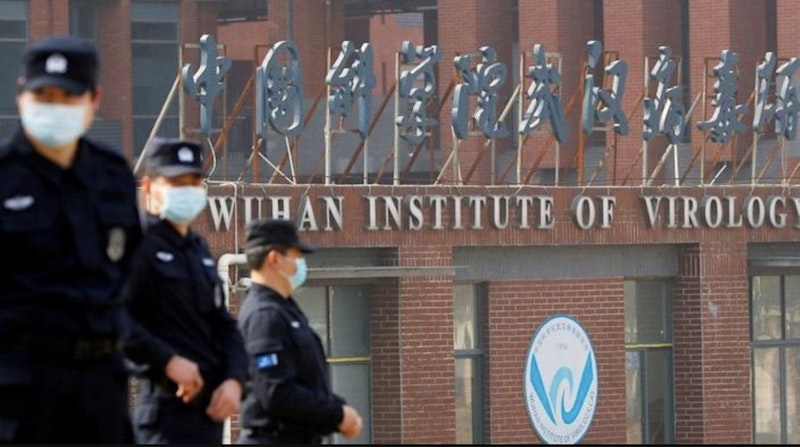 For some reason, Democrats and the media have discounted any suggestion that the Wuhan lab-leak theory on the origin of the coronavirus pandemic might be true. Acting as political operatives, they've gone on the assumption that it's just a coincidence that the Wuhan Institute of Virology, where scientists were studying the exact same virus family that the coronavirus is in, was located in the same city in which the coronavirus emerged. This gullible group has preferred the narrative put forth by the Chinese Communist Party, which runs China like an organized crime family, that the virus emerged from a "wet market" bat—never a convincing argument, and looking less credible with each passing day, to the media's embarrassment.

Those pushing for full transparency, and questioning the CCP's bogus version of the story are slimed as racists, or mocked as conspiracy theory nuts to be treated with the same contempt as climate change deniers and anti-vaxxers. But the tide's turned, and soon enough we'll see who the real cranks are.

CNN once claimed, based on a hunch, that the lab theory was "almost certainly not true." NPR said "scientists"—the scientists they wanted to listen to—had debunked the theory. Here's The Washington Post on the issue: "Tom Cotton keeps repeating a conspiracy theory," which it said had been debunked. Fifteen months after calling the Republican senator a conspiracy nut, the Post ran a correction saying that it couldn't back up some of the story's claims. The key takeaway is that a powerful newspaper knew when the story ran that it had no proper evidence to back its inflammatory accusation, but ran it anyway because it wanted to "get" Cotton, who's near the top of the Democrats' hate list.The Post’s Josh Rogin, the only reporter at that newspaper worth paying attention to on this matter, is currently busy exposing his employer's bias and incompetence.

Despite what Dr. Anthony Fauci, the Democrats' new Hippocrates, once told us, the lab theory has now gone mainstream, while the "bat" theory's fizzling out. In May of 2020, Fauci told National Geographic that he was “very, very strongly leaning toward this could not have been artificially or deliberately manipulated,” adding that all signs indicate the virus “evolved in nature and then jumped species." But in June of 2021, Fauci, who our science journalists have always trusted implicitly (not having to develop their own sources made their job easy), said he'd always kept an "open mind" about how the virus first spread, which he hadn't. Donald Trump and Mike Pompeo, having seen actual evidence, gave credence to the lab-leak theory, giving hoodwinked journalists even more incentive to just report Fauci's words as fact. Defending the CCP's self-serving version of the story became one more way to exhibit their resistance to the orange menace.

You'd think that the media and Fauci would've kept open minds, as what could be more important than tracing the origin of this plague, especially since the U.S. government helped fund the Wuhan lab? Instead, the media, in conjunction with the Democrats, invented the wholly-unconvincing narrative that entertaining the lab theory was an act of "racism" and a conspiracy theory promoted by crackpots. Anyone with enough sense not to pet an alligator could discern that the skepticism was aimed at the tyrannical Chinese Communist Party, not regular Chinese people, or Asians in general, as some claimed. Moreover, progressives claiming to care about Asians is laughable, as they've worked hard to suppress who's actually been committing all the violence against Asians recently in this country by presenting the false narrative that Trump fans are to blame. Asian lives don’t matter within the Democratic Party.

Media/Democrat naivete towards the Chinese government—a malignant, bullying force that has a chilling amount of influence over Hollywood, Big Tech, Wall Street, and education—presents a danger to the security of the U.S. The CCP doesn't just seek a balance of power with the U.S.; its goal, for decades, has been to achieve hegemony over its neighbors and the Western Pacific, which apparently is news to the New York Times. In an article about one particular variant of the Wuhan lab theory, the Times asserted that it was "the kind of tale that gains traction among those who see China as a threat." The insinuation's that only Trumpist knuckle-draggers see the CCP as anything but friendly competition. What sort of childlike mind must you have to not see a nation that imprisons a million Muslims and uses them for slave labor as a threat?

Our "top" journalists are so bad at their jobs that they bought into the CCP's coverup of the coronavirus origin story, which could end up becoming the greatest media failure in American history. Nobody can admit they got the story wrong, so they resort to weasel words, saying things like the theory's became more credible. But it's always been credible to those who didn't care to politicize it.

The simple-minded media, on this issue, have operated on the heuristic that if Trump or Tom Cotton says it, it can't be true, but if Anthony Fauci says it, it must be true. That approach has eased the cognitive load that doing actual reporting entails, but it makes for shoddy journalism.