It’s all about marketing, in service of the bottom line. 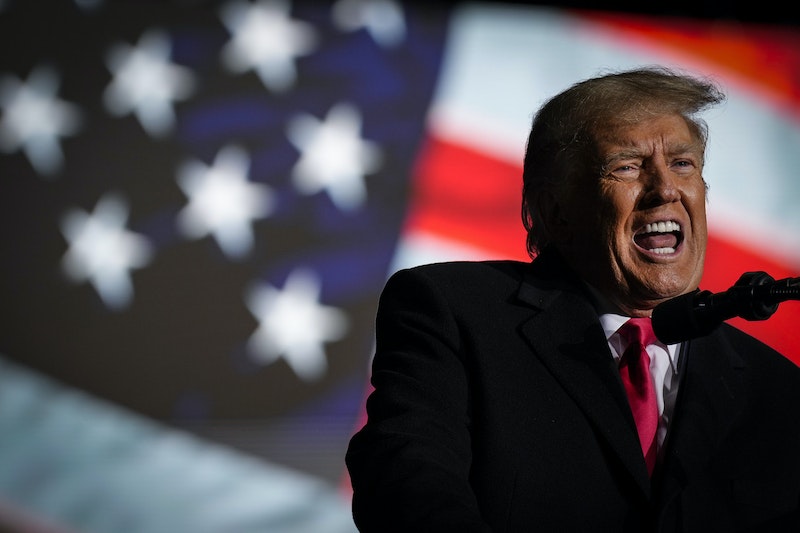 Pardon the interruption, for last week I wrote that the political “hot stove” season, meaning click-gatherers, were already conducting polls and writing articles about the 2024 presidential election, which is at least six months premature, but it’s hard to ignore The New York Times’ continuing harangues about Donald Trump. (Criticism of Trump, and the last days of his presidency and subsequent exile are deserved, but hasn’t that topic been covered?) I hadn’t planned to devote space to the subject, but as the most prominent alleged anti-Trump newspaper in America (The Washington Post runs a distant second), the Times does drive conversation in the political industry, and the newspaper’s obsession with the former president—even though so many of his high-profile endorsements in the Nov. 8th midterms lost badly, with good reason—leads to just one conclusion: the Times editorial writers, reporters and columnists kneel down each night and ask the Almighty that the Mara-a-Lago loon runs again. Why? It’s good for business. Pure marketing. I’m in favor of a robust marketplace, but to go on and on and on about Trump’s “threat to democracy” is by now ham-handed—a transparent play for the devotion of the winnowing number of people who still fear the almost-irrelevant ex-president—is a dereliction of the paper’s supposed mission.

As some know, Trump held a rally last week in which he tepidly announced that he’d be a candidate for president again; aside from the media it didn’t cause much of a stir, especially compared to the far more entertaining (and relevant) battle between Twitter owner Elon Musk—who shares Trump’s extreme narcissism—and the “establishment” that’s ostensibly affronted by his mass layoffs at the company (a smart move, given Twitter’s bloated number of employees) but mostly because of their own lost “agency,” and ongoing riddle of Sam Bankman-Fried’s FTX bankruptcy. (Does SBF have the survival instincts and cunning of the late Robert Vesco, becoming an anti-folk hero as he hops periodically from no-extradition countries?) Perhaps the latter is given less play—though widely reported upon—than also-ran Trump, because SBF was, until last summer such a cash cow for Democratic candidates.

Times readers have digested—or not, perhaps wisely migrating to the crossword puzzle, film reviews and restaurant critiques of new vegan restaurants in Queens—the following variation on an editorial page obsession maybe 50 times in the past, but I present it for those who missed it the first and 28th time around. In a November 15th editorial (though not in print until the 20th), it’s written: “[Trump’s] new campaign has begun with the same ugliness, lies and chaos as the last, but it poses even greater dangers to American democracy… If he is still in the race when the first votes are cast in 2024, the election will once again be a referendum of American democracy, but if our system of government is to survive, voters must choose leaders who accept and submit to the rule of law… [T]here is work to be done.”

Was the 2004 presidential election, pitting incumbent George W. Bush against a lackadaisical John Kerry, a “referendum on democracy” in Times-speak or is that just a new marketing tool? Besides, if “democracy was on the ballot” a few weeks ago, as many “experts” insisted—an exaggerated notion—then “democracy” won since the likes of awful Republican candidates like Doug Mastriano, Don Bulduc, Dan Cox, Blake Masters, Kari Lake, Tudor Dixon, to name a few, were defeated. It’s not until the 13th paragraph of this windy Times editorial that the name of Ron DeSantis, a Republican who won a landslide reelection in Florida, and is now the unofficial leader of the GOP is even mentioned. And he’s named in passing, third behind the horrendous Mike Pence and quickly-running-out-of-heroine-points Liz Cheney, who, in any case, is by now a Bill Kristol/Max Boot Democrat.

For good measure, also in Sunday’s “Opinion” section, Maureen Dowd, in her column-for-life, added that Trump “would rather blow up our democracy than admit he’s a loser, and that makes him a traitor.”

I’d guess, judging from his Nov. 21st New Yorker column, that John Cassidy—an economic left-winger, but a writer who has a funny bone as compared to, say, Paul Krugman—is also itching for a presidential run by “the King Lear of Mara-a-Lago.” Cassidy has no monetary flag to furtively wave (The New Yorker’s finances are murky)—save his continued employment—but fun copy is fun copy, and since 2015 no one has compared to Trump. Although Cassidy begins with a “full disclosure” that he’s in the “category” of “many Americans” who don’t want to think about 2024 politics, Trump’s announcement has compelled him to do so. It’s his view that other Republicans who want to run against Joe Biden, Kamala Harris, or whomever the DNC chooses, need to band together to defeat Trump, “perhaps subordinating their individual interests and ambitions.” To his credit, Cassidy doesn’t once mention saving democracy.

But in a roundabout way, it’s clear he’d relish another Trump run. He downgrades the appeal of DeSantis, saying the 44-year-old Floridian (his age is a plus when put against Biden and Trump) doesn’t have the juice of Trump. He writes: “The ovation that DeSantis received [in Las Vegas, appearing with other Republicans at the annual Jewish Republican Coalition conference] showed that his anti-woke, fire-and-brimstone culture-war rhetoric appeals to Republican activists and donors. Still, it remains a much narrower platform than the populist message that Trump delivered in the 2016 primary campaign… Economic populism was the key to his success. So far, the buttoned-up DeSantis doesn’t look like the candidate to embrace that approach for 2024.”

Seems like Cassidy is indulging nostalgia for 2015, when Trump turned perceived gaffes into gold, and was unfettered by his early response to Covid, crybaby remarks after he lost to Biden, and then the January 6th Capitol protest that he encouraged. I’m not plumping for DeSantis—it’s rare that a candidate I like is nominated, Jerry Brown in ’76 and ’92 for the Democrats, Republican Chris Sununu in ’24 (too sensible and low-key)—but I’m sure Cassidy knows that the Governor is now the GOP leader. Like most of his colleagues, he just wants Trump to run. It’s a hoot as a reporter, and revenue stream for the media.