Article on Indian Wells Tournament focuses on opulence for gentry. 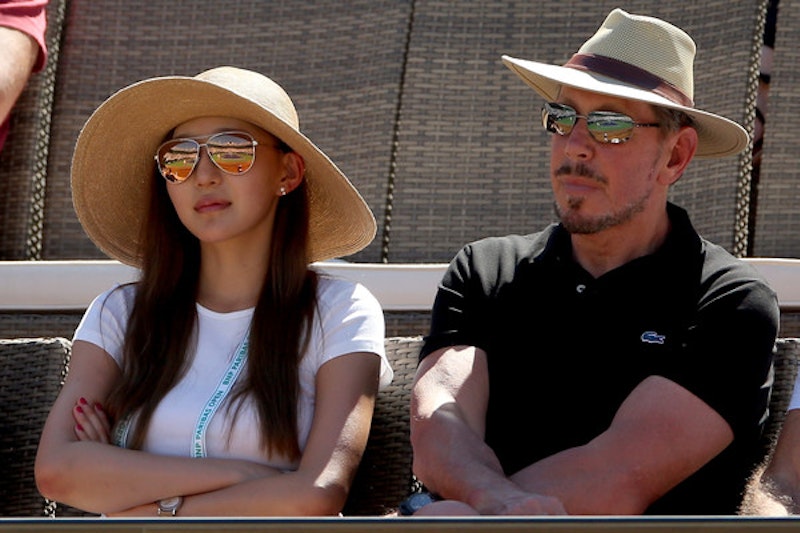 The New York Times once had a stellar reputation for tennis coverage. Many tennis fans, unable to make it out to Indian Wells, California for the BNP Paribas Open, might’ve been relying on the Times to keep abreast. On March 18, they’d have been rewarded with a documentation of all the opulence available to well-heeled tennis fans out in the California desert.

Do fans really want to know how Roger Federer matches up against his next opponent when they can vicariously experience the thrill of eating a $35 Wolfgang Puck smoked salmon pizza in a luxury box, or learn of Puck’s whimsically designed ball-shaped sorbet that warm raspberry sauce is drizzled over tableside? Magically, this act “melts the components into one.” NYT tennis writer Ben Rothenberg was there to give us the scoop.

High-living tech billionaire Larry Ellison owns the Indian Wells tournament now. He's transforming it into his tennis version of the Playboy Mansion so he can lure the L.A. haute monde out to Riverside County every year and impress them. The best tennis players in the world might not be enough bait for this pampered set, so the Oracle founder’s sweetened​ the pot by featuring the culinary stylings of Puck and his fellow celebrity chef, Nobuyuki "Nobu" Matsuhisa. The glitterati are now able to nosh on Nobu's $560 per pound wagyu steak while enjoying the action on the courts.

Rothenberg solemnly ushers his readers into the inner sanctum of the facility’s luxury suites, where Ellison has recently installed private toilets “with lids that rise invitingly as a person approaches.” Unfortunately, appetites whetted, we’re denied passage through the portal to the innermost of these private dens—that place majestically referred to as the Champions Club, where Ellison entertains a lucky handful of guests each year. Its amenities, while certainly exquisite enough to quench the desires of even the most immoderate sensualists, are also top secret. The reader’s left to dream of their magnificence. The tournament's nominal director, Tommy Haas, isn't authorized to detail them: “That’s a cool thing about it too is that it is private and there is a little bit of mystery about it,” he said. “The few people who have a chance to go down there... are blown away.” What could be cooler?  Hold on. The Times informs us that next year the event will “probably be even more opulent.” Tennis fans now know what media outlet they can rely on when those details finally leak.

What's going on at the Times’ sports department? All those budget cuts we hear about must’ve kicked in. The Times sports editor, Jason Stallman (who plays no sports, and seems to have little interest in them), says his idea of a good sports story is one that extends beyond sports into science, business, culture, or politics. Maybe that means, as in this article, having your writer mention the results of exactly one match in a “tennis” article and then extend it out to the crucial cultural topic of elite opulence. Stallman’s stated that his target reader “values rigorous reporting and delights in the unexpected.” While delivering the unexpected, this piece is about as rigorous as something on the hottest new mac 'n’ cheese recipe.

The sort of story I'd be interested in is: who's really running the show now at the BNP Paribas Open? Last year, in a huge controversy, tournament director Ray Moore was forced out after making some impolitic remarks about the women's tennis tour. Rothenberg has just reported that Moore's only position now is “consultant” to Larry Ellison, and that ATP player Tommy Haas is now the director of the tournament. The writer quotes WTA chief executive Steve Simon as saying of Haas, “He’ll do fine. He's a great guy.” Sure thing. $28 billion man Larry “Darth” Ellison puts people in leadership positions based on their qualifications of being great guys after they've spent their entire adult lives playing tennis.

Here’s my theory: It's known that Haas used to stay at Ellison's Porcupine Creek Estate when he played Indian Wells. They became buddies. Ellison sized him up as the right puppet to install when Moore became toxic over a gender-related issue. Suggesting male players should make more money than female players is a taboo topic on the tennis tour. Ellison doesn't really care about the issue but must appear to care. He trusts Moore—they've been spotted sitting together at tournaments—so even though he strips him of his three job titles, he retains him as a “consultant.” Perhaps a consultant who calls the shots behind the scenes.

More theorizing: The Times wants to portray Moore’s downfall as a social justice victory over sexism. Rothenberg reported the story in this light last year when it unfolded. His recent update affirms this interpretation. There's a pattern here. The Times has an agenda. Its latest article on the Ray Moore issue quotes Andrea Petkovic as saying she thinks Moore should’ve been replaced with a woman. That's the angle the Times wants to work here, which it does by cherry-picking one quote from one regularly outspoken female tennis player.

My guess is Ellison’s playing the Times. Ray Moore's now the shadow head of the tournament, but an inexperienced, gullible tennis reporter thinks Tommy Haas really runs the show. When the Times reports something, the “lesser” media fall in line. The Times is now trying to convince us it's on a big truth crusade to protect America from Donald Trump, but it’ll have to do more than talk about it.