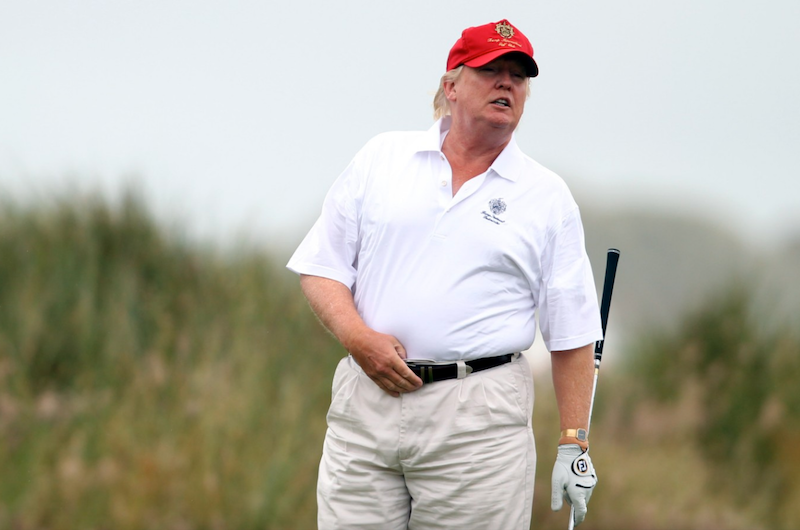 "Ben Hogan for President: If We're Going to Have a Golfer, Let's Have a Good One." That was one of the 1956 Democratic slogans in their unsuccessful campaign to unseat Dwight D. Eisenhower, who was notoriously obsessed with golfing. For Ike's enemies, golfing became the symbol of his laziness, remoteness, age, and unseriousness. The picture of out-of-touch golfing Ike was so indelible that when the image-obsessed Kennedy moved into the White House, he took care that he was never photographed out on the fairway.

Now we have another golfing president, and his political enemies are making the same arguments. Trump heads off to one of his properties every weekend, trundling around the golf course while spending taxpayer dollars on secret service protection. The president is lazy; he's selfish, he's out of touch. Golf is the symbol of all his sins.

There's some justice in Trump nailed to his nine-iron. While Obama was president, Trump hypocritically sneered at him for occasionally playing golf and taking working vacations. Still, golf as a symbol of all sins is rather unfair to golf. Ike wasn't lazy or out-of-touch no matter how much golf he played. Trump would be an incompetent jerk even if he never stepped up to another tee.

Moreover, given all the horrible things Trump does or is likely to do, the fact that he wanders around a lot of golf courses is the last thing anyone needs to worry about. All presidents have taken vacations. Partisan opponents always make this out to be a waste of taxpayer money. But the millions Trump spends on his jaunts is barely a rounding error in federal spending. Critics have said that Melania's security detail is more expensive than the entire NEA budget that Trump wants to cut. But even if true (which it mostly isn't) this would just show how tiny the NEA budget is. It doesn't mean that Trump and/or Melania should pinch pennies by staying in the White House.

I'd rather Trump play more golf. Play golf every day, and never come back to Washington. Arlo Guthrie, back in the 1980s, noted that he couldn't really understand why people complained about Reagan napping. "I kind of like the idea of a sleeping president," he quipped. "The more he sleeps, the safer we are." Certainly there are downsides to a disconnected president; while Reagan napped, Oliver North sold arms to Iran. But you can't start a pointless nuclear conflict while you're asleep. Our chances of millions dead on the Korean peninsula are a lot lower while Trump is putting than when he's sitting in his room watching Fox and frantically composing belligerent tweets.

So far, Trump's worst excesses have come when he's on the scene. The Muslim ban and the ramping up of ICE raids are examples of Trump trying to be engaged and fulfill his campaign promises to gratuitously harm marginalized people. Similarly, he appointed Gorsuch in an efficient, presidential manner, choosing a name recommended by conservatives, and passing it on to the Senate in a timely fashion. On the other hand, Trump's inability to focus and lack of hands-on management has been a great boon for the left on ACA repeal, where lack of presidential leadership has left Trumpcare adrift.