For the Good of the Country, the GOP Has to Shape Up

A one-party system is awful to contemplate 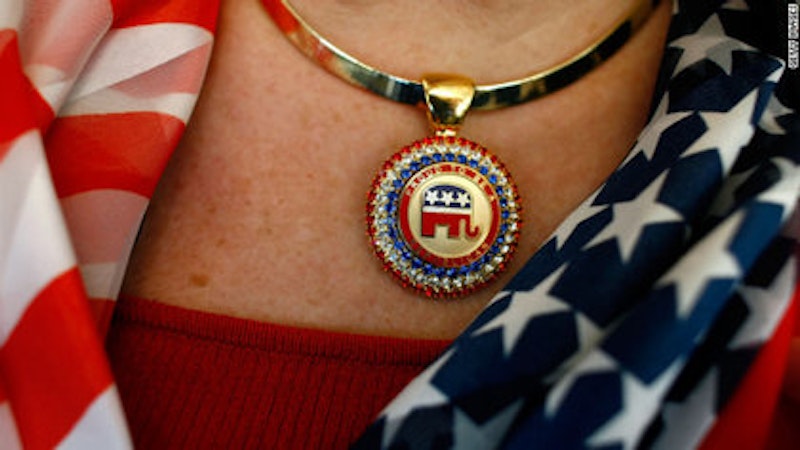 The GOP faces a demographic Waterloo. Though they've flirted in the past with trying to appeal to Latino voters, their anti-immigrant stance this cycle, not to mention the occasional and shameful racial dog-whistling, has basically alienated everyone who is not white… and not old. Since the old are not getting younger, and since the electorate is becoming less and less white, the Republicans face an uncertain future. They need to either stop being so darn white, and ditch the racist nativism, or resign themselves to irrelevance.

This isn't an original observation; the Republican's looming difficulties have been covered extensively (for example, here and here). I think it's maybe worth pointing out, though, that the GOP's demographic problem isn't just a problem for the GOP. It's a problem for the whole country.

The Republican's racial homogeneity is bad precisely because it leads to nativism and to racial dog-whistling. The fact that Republicans have alienated virtually everyone who is not white leads them to see non-whites as the enemy, and therefore adopt vile voter suppression tactics that are explicitly meant to prevent minorities and poor people from getting to the polls. Such tactics in turn further alienate minority voters, which in turn solidifies the GOP's antagonistic attitude towards minorities… and so forth. The Republicans’ homogenous demographics are both the result and the cause of racism, just as segregation is the result and the cause of racism.  The GOP has placed itself in a position where self-interest strongly incentivizes supporting racist and nativist policies. This is shameful and poisonous, not least for Republicans themselves.

In the longer term, the GOP's predicament can also have terrible consequences. It would be great if, in the face of electoral apocalypse, Republicans could bring themselves to expand their party and chuck the racist bullshit.  But what happens if they can't? Again, the feedback loop here is powerful, and losing an election or three might not be enough to break out of it. What we'd get then is not a widening of the party, but a death spiral, in which an increasingly hard core gets increasingly desperate. Eventually, presumably, a third party would take the Republicans’ place as a viable alternative, but that could take a long time. There's no reason that we couldn't be looking at another 15 years of more and more vicious white resentment.

Even putting aside the racism, it’s terrible for the country—and minority voters—to have only one party to choose from. There are plenty of reasons for voters, and certainly for minority voters, to be unhappy with Obama. His administration has been very aggressive with deportations. And minorities were disproportionately hurt by the financial crisis and the consequent recession. Minorities have even more reason to be pissed at Obama for (as just one example) his failure to push for mortgage relief.

But problematic as Obama's policies have been, he is not actively agitating for building a fence across the border, or babbling about self-deportation, or boasting about suppressing minority turnout. If you're black or Latino (or someone who thinks blacks and Latinos should be treated like human beings) the Republican Party has made it plenty clear it doesn't want your vote, which leaves you with one option.

The fear, then, is not just that the Republican Party will become more unhinged and somehow retain power. The fear is that the Republican Party will become unhinged, marginalize itself, and leave more and more voters no choice but to vote for the Democrats. This is what has happened in many urban areas such as Chicago. Mayor Richard M. Daley, with control of the Democratic Party machine, was able to rule the city as long as he wanted, with absolute control over supine aldermen. Our current mayor, Rahm Emanuel, is following the same blueprint, shoving through half-baked initiatives because he feels like it and there's no one around to challenge him. His most flagrant idiocy, an increase in the length of the school day with no increase in teacher pay, may provoke a teacher's strike, but has resulted in no substantial political opposition, in part because Emanuel has no substantial political opposition. The Republican Party in Chicago is a joke, in no small part because it's so thoroughly alienated minority voters that it has no chance in a community with a significant minority population.

A national political system like Chicago’s is not pleasant to contemplate. But it could be our future if the Republican Party doesn't get its act together. America needs two political parties that are integrated. And that integration needs to go beyond trotting out a handful of minorities to stand up on a convention platform. It has to mean taking minority concerns seriously, and actively seeking their votes. The Republican Party can choose to make America less racist, more democratic, more free and more just.  If they fail, they fail not just their party, but their country as well.