The Left and the Right Are Succumbing to Madness 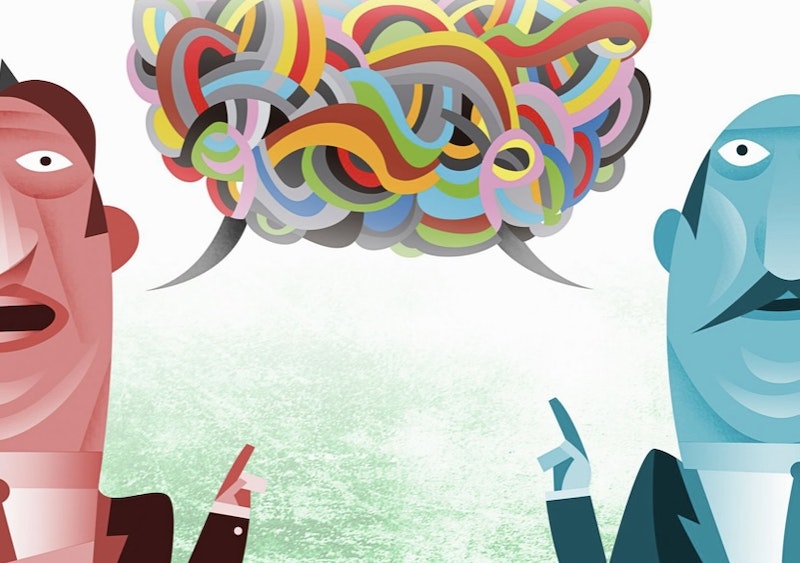 QAnon's dopey disciples believed that JFK Jr. was going to re-emerge into the spotlight before the 2016 presidential election and choose Donald Trump as his running mate. They're also convinced that a guy in Pittsburgh named Vincent Fusca is actually JFK Jr. in disguise, even though John F. Kennedy's son died over 20 years ago in a well-publicized plane crash. But clinical psychologists say that those entertaining such bizarre delusions are not mentally ill, and they tell us not to call them that because it adds to the shaming and stigmatization of people who struggle with mental illness. Okay, but we're now surrounded by people who are out of their minds. I'll call them crazy because I don't want to stigmatize anyone.

The GOP shifted into full-on crazy mode after Joe Biden beat Donald Trump by over seven million votes in November. Rudy Giuliani's tawdry press conference at Four Seasons Total Landscaping marked the beginning of this lunacy. There'd at least be some comfort in knowing that our numerous nuts are confined to the MAGA crowd, but progressives are getting loonier by the week as well.

Where to start? Something MSNBC's smug host Joy Reid said on her evening show not long ago will suffice. Responding to a Republican who'd criticized Joe Biden's choice to head up the Office of Management and Budget, Neera Tanden, Reid took great offense because Tanden's an "Asian woman," as if that alone immunizes her from her questionable behavior on Twitter and past political stances. That's crazy.

Someone who will have a key role in shaping the federal budget has a history of pushing for cuts to Social Security, which is not progressive, but "progressive" MSNBC wants no part of that discussion. It's challenging to sort out what progressive means now that so many Democrats have gone off the rails like Reid, who once promoted a 9/11 conspiracy theory (the U.S. government did it) and has an Internet history of homophobia and transphobia—she tweeted that Ann Coulter was a man.

Conservatives have gone bonkers because they fear they'll never win another presidential election because of shifting demographics. Progressives have gone off the deep end because their former core set of beliefs has now been subsumed by a quasi-religious obsession with identity politics.

QAnon freaks are convinced that a cabal of Satan-worshipping, cannibalistic pedophiles runs a global child sex-trafficking ring and are plotting against their hero Trump. The scary part is that these crazies have now found a home in the Republican Party. Any sane political party would run away from these kooks, but dozens of Republicans, a bunch of whom have run for political office, have offered support for at least some elements of QAnon's conspiratorial worldview.

Trump has softened up Republicans to be duped by conspiracy theories. Progressive lunacy, on the other hand, is often manifested in a loss of emotional control when confronted with opposing views. The most spectacular example of this phenomenon remains Yale University's "Shrieking Girl," who had a mental breakdown while confronting Nicholas Christakis, a distinguished Yale professor who'd sent an email suggesting that students not obsess over Halloween costumes they didn't approve of. That's all it took to make this privileged student lose her mind.

Progressives use their eagerness to be offended (often offended on behalf of others) as a weapon, while the Trump Republicans use their increasing extremism to filter out all the parts of reality that don't jibe their increasingly paranoid world view. Haverford College students went on strike for two weeks because of a poorly-worded but well-intentioned email from the school's president, and they fool themselves into believing they've acted with honor. Dr. Drew goes on Fox News and assures gullible viewers that the coronavirus is less dangerous than the flu, and then he contracts the virus and has to apologize for giving people advice that could have killed them. This quack shouldn’t be allowed to dispense medical advice again on TV, but that's not the way it works.

The Left now tends toward censorship and shaming while the Right seeks to overwhelm reality with conspiratorial musings involving the deep state, rigged elections, and George Soros. Fanaticism is winning the battle on both sides. Progressives practice the tyranny of virtue, and subject those who don't meet their lofty standards to Kafkaesque inquisitions aimed at cancellation. The Trump Republicans’ weapon of choice is labeling anyone who doesn't love laissez-faire capitalism as a "socialist."

So how about Trump, the guy who's led the Republican Party down the path to madness—is he mentally ill or just plain crazy? Trump’s always been crazy but, unlike Waylon Jennings, it hasn't kept him from going insane. The President's grandiosity, narcissism, and inability to distinguish between fantasy and reality are indications of mental instability that would benefit from psychiatric treatment. This is the guy who said China is responsible for spreading the global warming "hoax," and "I’m a professional at technology." On February 26 of last year, the President said that COVID cases would soon go down to "close to zero." With only a few more days left in office it's difficult to know which we should fear more—crazy Trump or mentally-ill Trump.