The Klan Whitewash That Wasn't

Let's explain “showing and not telling” to angry bloggers. 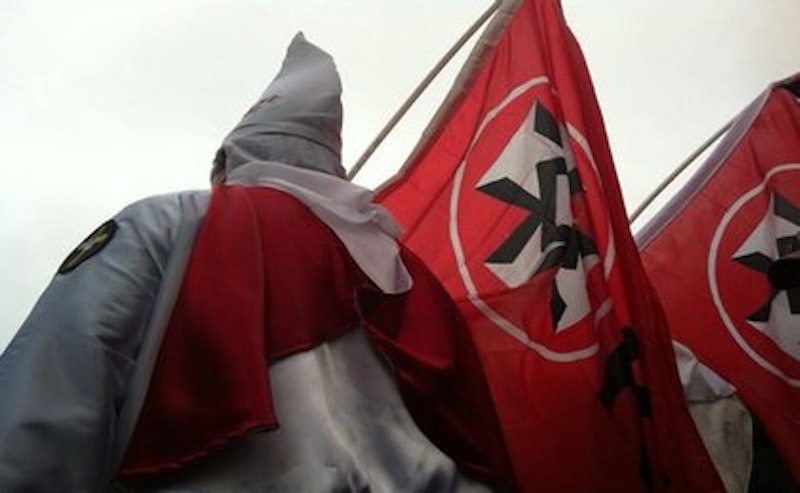 A reporter wrote an understated, show-not-tell portrait of a local Klan leader. A pretty good portrait, as these things go, better than most newspaper copy. But it set off alarms with a couple of liberal bloggers because the piece didn't note outright that the Ku Klux Klan is bad and racist. In fact, Kathleen Geier at The Washington Monthly wants the article's reporter and editor to be drummed out of the business. She's in a froth over “this wretched POS, which by all rights should be a career-ender.”

Well, gosh. Here's the windup to the Klan piece, which is by Samantha Bryson of the Memphis Commercial Appeal: “Eventually the talk turns to homosexuality, and Edward's sister qualifies one of her statements by saying that they don't necessarily hate gay people, just homosexuality. Edward rebukes her. Of course we hate 'em, he says.” Yes, show-not-tell. Out of his own mouth we have him, no editorial comment necessary.

You or I might object that, really, quote marks are needed before the statement qualifies as being Edward's. But we see what the article is going for. With show-not-tell, Point A can be the bedrock of a piece without being put into words. Everyone knows the Holocaust was bad, and that fact wouldn't have to be restated if we were shown two Nazi bureaucrats being very businesslike about gas shipments. The point would still be there; without it the scene would be pointless.

English teachers love show-not-tell, and often enough it's a good technique to use. An opinion, a sense of what the facts add up to, can jump into the brain when the reader has to do some adding in the back of her head. I don't love the technique as much as my teachers did, but we all know what it is. Except the angry liberal bloggers.

Geier figures the article is meant to make the Klan look good: “Clearly an attempt to portray the kinder, gentler side of the Klan, it is an epic journalistic fail.” That's why she wants heads to roll. But over at Balloon Juice, mistermix takes a wider view. “This piece is exactly what happens when you take the last 40 years of journalistic teaching and practice and apply it to a subject like the Klan,” he says. He points to that old devil called the View From Nowhere, the cult of hands-off journalistic neutrality.

According to mistermix, the piece is desperately two-sided. But here's Geier: “It should be emphasized that the only people interviewed for or cited in the article are Klansmen and one academic who says something neutral and academicky.” She and mistermix ran the same copy past their brains and came to opposite conclusions about a basic fact. Yet they're both convinced they know what the article is up to, and they're certain that it deserves contempt, either of the yapping variety or the weary, head-shaking variety.

Neither of them gets that the article is presenting the point of view that the Klan, up close, is banal but still awful. What happened was that their scanners crashed on contact with an object they could not classify. Geier and mistermix mistook this crash for mental activity and began to type.

Noonan moment. It's tough being a Catholic these days. Not that I am, but life must be hard if you love an institution and it generates headlines about child-abuse. Peggy Noonan sizes up the mess in her latest Wall Street Journal column. As she might put it, she sees much hope in this new man, this soft-spoken pontiff who knows what a bus token feels like. What she doesn't do is mention child abuse. The Church is going through a dim, shady time and the lights must go back on. That's her message, and nothing about what kind of shadiness has been taking place.

All right, she's being tactful. But Noonan's tact creates a gap in the facts, and she chooses to fill that gap with her particular kind of colored gas. Leave child abuse out, and the cardinals are guilty of what? Of collaborating in the concealment of a crime that may go nameless in this particular column but is still acknowledged by reader and columnist to be horrible, to be possibly the worst act a human can do? No, not according to Noonan. She says the cardinals' big problem was an “unconscious arrogance,” the kind “human beings are prey to when they hold high office in a great institution.” The cardinals were just too full of themselves, too stuffy and out of touch.

When Noonan imagines church leaders at their bad work, she doesn't see men covering up evidence and making sure the culprits behind atrocities can continue to operate. No, the whole thing is dozy and grand-opera like. The “church leaders became like military officers who wear all their medals and spend too much time dreaming up new ones to award themselves.” Oh, the duffers and their silly ribbons. If only they would ride the bus.