Support of gay marriage is now the norm. 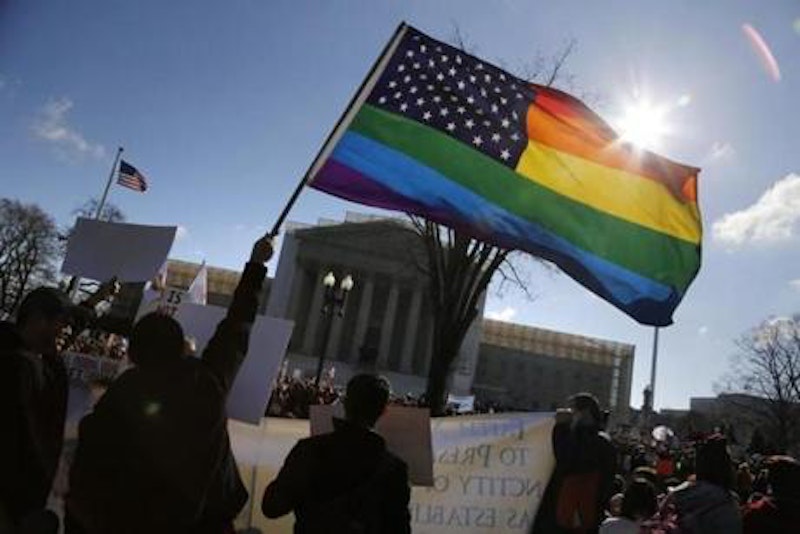 America’s view of marriage has changed with such awesome swift force that the nation’s institutions, mainly the Supreme Court and the major political parties, have been whipsawed by the abrupt cultural turn-about and appear unprepared to deal with the accelerated consequences.

Gay marriage is a case of the old ju-jitsu that has spun wildly and unpredictably into mainstream acceptance. Barely a decade ago, such an unconventional idea as same-sex marriage didn’t exist. And if it did it was a nascent thought only in the minds of a few outliers. Today, even such an eminent egg-head as conservative Justice Samuel A. Alito Jr. declaimed during the Supreme Court hearing on California’s Proposition 8: “You want us to step in and render a decision based on an assessment of the effects of this institution, which is newer than cell phones or the Internet? We do not have the ability to see the future.”

Ditto the Defense of Marriage Act (DOMA), which got its own measure of attention of the second day of back-to-back court hearings on the tetchy matter of gay unions. Almost everyone agrees that DOMA, federal law since 1996 and the Clinton Administration, is unconstitutional, including a majority of justices as well as the Obama Administration which refused to argue in favor of retaining the law. DOMA, in effect, denies more than 1100 federal benefits to gays who are legally wed in the nine states that allow same-sex marriages.

There even came a point in the arguments over Proposition 8 where the validity of the 1973 Roe vs. Wade decision was questioned as an example of when the court acted in haste on an idea whose time had not yet arrived. The mere mention of the landmark decision on abortion rights sent shivers among supporters over concern that the conservative court is itching to re-visit the issue of personal choice. Opponents have argued for years that Roe vs. Wade was a misguided legal decision based, as it was, on the commerce clause.

And in case anyone missed the point, children and gay families loomed large in the Supreme Court hearings. Justice Anthony Kennedy noted that in California alone there are 40,000 children living in same-sex households who are being raised by gay partners and deserve a voice in determining whether gay marriage should be granted full civil legitimacy.

Gay marriage is without question a matter of generational style and tolerance. Polls show that overall same-sex marriage is approved by 56 percent of the population, a leap of about 20 points in favorability over a 10-year period. But among the all-important demographic, the age group of 18-35, the approval rating surges to about 80 percent. And even more astounding, the 80 percent figure holds steady even among young Republicans in that age grouping, putting the GOP’s youth flank at odds with the aging white males that most aptly characterize the party.

Everyone has a friend who is gay or knows someone who has a gay friend. More often than not it involves family. It has also been noted that rarely in the history of polling has such a seismic shift in attitudes occurred as with gay marriage. The American public has been bombarded by nuance as well as overt action into cultural acceptance of same-sex partnerships on television sitcoms, reality shows, movies, Broadway shows, news shows (and anchors) and jubilant gay pride celebrations and parades until the gay lifestyle is now a commonplace fact of national life. The coda to the attitude adjustment is that gays have coalesced into a unified and vociferous national movement with a single purpose: Equality.

The issue of gay unions is not limited to America. Eleven nations have legalized same-sex marriages—Argentina, Belgium, Canada, Denmark, Iceland, Netherlands, Norway, Portugal, Spain, South Africa and Sweden—and 14 others have similar legislation advancing, at one stage or another, through their governing bodies. Gay marriage is an especially contentious issue in France, where activists on both sides of the issue clash almost daily in the streets.

That same-sex marriage wasn’t even a word formation in common usage only a decade ago is kind of a social phenomenon unto itself. It wasn’t until the idea was formulated to equate the drive for gay marriage and full rights with the civil rights movement that the unusual sexual arrangement attracted attention and took hold as a full-fledged force of history. Initially, many of the aging, battle-tested veterans of the civil rights movement for racial equality resented the linkage and spoke openly against the comparison in which many blacks as well as whites gave their lives. But gradually the resistance weakened and the notion of same-sex marriage gained acceptance as a basic civil right.

Though the battle is now fully engaged, progress on same-sex marriage has not been without its obstacles. While nine states have approved the unions, 38 states have adopted laws against it. And only in three states—Maryland, Maine and Washington—have the voters directly approved gay marriage by ballot.

Even before Maryland voters approved same-sex marriage, the state’s attorney general, Douglas Gansler, had issued a ruling stating that Maryland had a legal obligation to recognize gay marriages performed in other states as a matter of contractual responsibility.

The dual court hearings have sent members of both political parties scrambling for safe political position. Within hours before and after the hearings, a half dozen senators announced their support for same-sex marriage as a constitutional right—Kay Hagan (D-NC), John Tester (D-Mont), Mark Warner (D-VA), Claire McCaskill (D-MO), Jay Rockefeller (D-W.VA) and Rob Portman (OH), so far the only Republican to openly endorse gay marriage. Portman’s son, a student at Yale, announced two years ago that he’s gay. The rush to support same-sex unions is so swift that by the 2014 elections, there probably won’t be a Democratic candidate of any consequence who does not support gay marriage.

Recall, too, that President Obama’s endorsement of gay marriage was one of evolution that he arrived at last year and then only after he was forced to by Vice President Joe Biden. The Clintons, Bill and Hillary, are latecomers to the issue as well.

Over the past dozen years, the Republican battle cry had been God, guns and gays. Now the massive cultural shift has reversed itself and is working in favor of Democrats. The GOP is faced with the daunting task of attempting to reconcile the growing and wealthy gay community with its stern, implacable evangelical base. Better for its own survival that the GOP should abandon the cultural wars and move on to other issues.

Court watchers advise extreme caution in attempts to read outcomes into the justice’s questions and philosophical exchanges among themselves. Yet the most seasoned analysts among them do not hesitate to predict that Proposition 8 will be a narrow ruling applying only to California. They also foresee the end of DOMA as a matter of leaving the issue of gay marriage to the individual states. It is, as they say, a matter of simple justice.