The state’s legislature may reduce penalties, but is a long way from decriminalization. 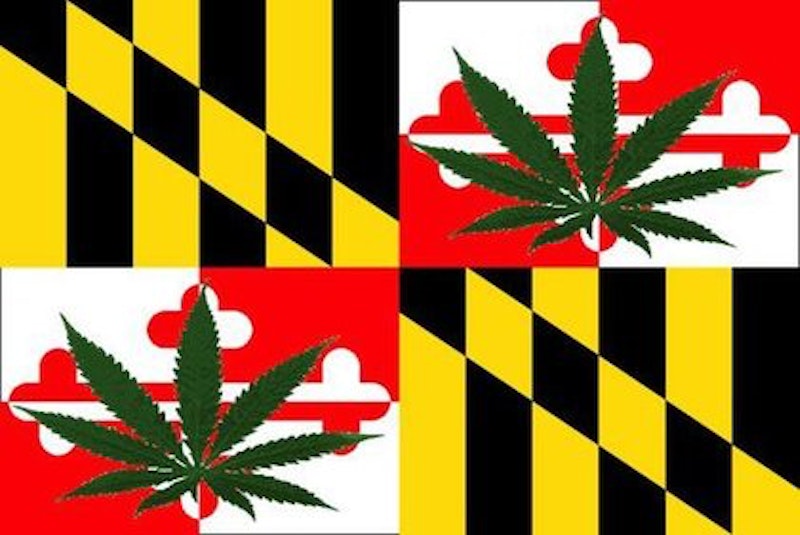 Anyone who wants to smoke pot legally must travel to California, Washington State, Colorado or a couple dozen other states that have modified their laws to accommodate either the ill or the recreational user. But not so in progressive Maryland, where an ounce or more of marijuana can get a person a $500 fine and up to 90 days in a local jail, wasting time, space and manpower on a triviality that is on par with, say, consuming three fingers of vodka or a couple of Heinekens. Dan Riffle, of the Marijuana Policy Project, was quoted in The Washington Post as saying there were 24,000 arrests in Maryland last year for possession of pot.

Maryland may continue its vanguard march where along with same-sex marriage, the Dream Act and the repeal of the death penalty the state is on the cusp of relaxing criminal penalties for marijuana possession. The Senate has voted 30-16 to make possession a civil penalty punishable by a modest fine of $100 rather than heftier fines and imprisonment. The House is considering a swatch of bills that would relax penalties by various formulas and degrees. The measure has Gov. Martin O’Malley’s (D) support. However, marijuana would still be illegal under federal law.

Marijuana was the anesthesia of the 1960s counterculture movement. Anyone who grew up in the 60s had either direct or indirect contact with marijuana or psychedelic drugs of various nomenclatures. In that self-indulgent but benighted era, the use of marijuana was considered a certain first step to the more lethal heroin and cocaine. This has been proven conclusively to be more of a durable myth than a scientific truth. And for the moment, at least, it appears that progressives (Democrats) are winning the culture war which conservatives have fought to reverse for more than 30 years.

Marijuana has even had a prominent place in presidential campaigns. President Obama has indirectly acknowledged smoking weed in his younger days. And President Bill Clinton admitted to using marijuana during his student years but qualified his statement, in typical Clintonion dissembling, by saying “I didn’t inhale.”

But marijuana has long been promoted as a medicinal agent with powers of relief from pain and anguish as well as a conductor for transitory euphoria. Among the first public officials to speak out for a change in America’s attitudes toward drugs was former Baltimore Mayor Kurt Schmoke—a former prosecutor and now dean of Howard University’s law school—who back in the 1990s called for decriminalization of drug laws. Schmoke, who became a national television phenomenon over the issue, was joined in the crusade by the eminent conservative leader William F. Buckley and others. Schmoke, scoffed at and belittled in his day but a man ahead of his time, is finally getting his due on the issue 25 years later.

As is often the case, marijuana, along with cocaine in some cases, have become middle class recreational drugs that have found their way from the inner city to the gilded homes of suburbia. But it’s more often the case that a young black person in the city will be busted and jailed for possession rather than the stockbroker or banker in a gated development across the jurisdictional line. Prison is for serious crimes, not for inhaling.

The true miracle of the Roman Catholic Church is that it has survived the papacy. This is especially the case of the American branch, for American Catholics love their church but they resent the rigid dictates of the Vatican, especially as they apply to the bedroom.

And within that generic cluster, there is still another bitter sub-division between those catechized Catholics who cling to the old ways and those who want to see modernization of the church’s liturgy and practices as a means to survival in America.

The selection of Pope Francis, Cardinal Jorge Mario Bergolio of Argentina, has given hope to both groups. On matters of doctrine, he is a conservative. On social issues, he is a thoroughly modern politician, kissing babies, working the rope line, saying Holy Thursday mass in a lowly prison chapel instead of the grandeur of St. Peter’s, preaching the gospel of the poor and eschewing the pomp and pageantry of the papacy like a populist candidate and one who rejects the official limousine for a hitch-hike in a mini-van.

Within the broad context of the church, there are matters that are achievable, with a little give-and-take, and others that are strictly hands-off. Matters of doctrine are non-negotiable. They are fixed in tradition and dogma and rooted in the teachings of Christ. But others are man-made as matters of convenience and expediency and are easily reconciled.

The church, for example, will never budge on abortion even though opposition to it has been proclaimed a matter of doctrine only since 1930. This is especially true since the 1973 Roe vs. Wade decision which forced the church to re-align its position on the death penalty to conform with its doctrine on the preservation of life. Prior to the Supreme Court’s decision on abortion rights, the Catholic Church had taught that the state had an absolute right to take a life. Today, the church teaches that all life, including those of murderers and rapists as well as the unborn, is sacred.

Contraception, on the other hand, is a profoundly personal choice among American Catholics despite the dictates of the church. Ninety percent of Catholics practice some form of contraception, although the church teaches that the use of artificial means of birth control is a sin. The church advocates a natural form of birth control called “rhythm,” a nifty little dance around the issue. The church could easily over time reach an accommodation on birth control as a means of family planning by removing the stain of sin.

Another area of accommodation is allowing priests to marry as they once could. Priestly celibacy has nothing to do with spirituality, sexual purity or abstinence. Celibacy was originally ordained by the church hierarchy as a matter of property rights and as a way of avoiding family feuds over estates and inheritance rights.

What’s more, under the new attempt at reconciliation with the Anglican Church, married Anglican (and Episcopal) clergymen are allowed the full privileges of the Catholic priesthood, upon acceptance into the church, with the added benefit of retaining their wives (and children.) An end to celibacy and allowing priests to marry would solve many of the church’s problems, including the shortage of priests as well as the epidemic of sexual abuse within the church.

Allowing women to serve in the priesthood is another issue whose time has arrived. Accept them. There is no valid reason not to if the church practices the equality in God’s eyes that it preaches. Women are the mainstay of the Catholic Church’s social ministry. Nuns run hospitals. They run schools. They supervise charitable institutions. They work among the poor and in the slums. There are many ways for women to serve God and the church. One more way would be the priesthood or some sub-step along the way such as deacon.

Pope Francis has inherited a deeply divided church in America as well as Europe but one that is growing dramatically in Latin America, Asia and Africa. There are a few simple adjustments that he could make to heal the divide without compromising the essence of Catholicism.