By ticking off a liberal to-do list, one by one, in Annapolis, O’Malley gets ready for Iowa. 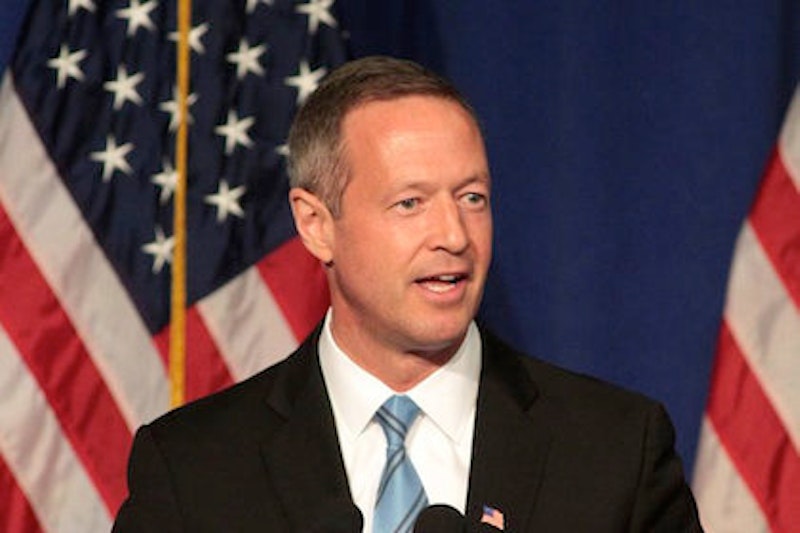 Only a state as wealthy as Maryland can afford a governor as generous as Martin O’Malley. Say what you will about who’ll foot the bill for O’Malley’s beneficence, the Governor, and some say president in-waiting, earned a resume upgrade by turning a swatch of highly controversial issues into a bold progressive list of achievements.

As every political rubbernecker knows, O’Malley’s scorecard was embossed, of course, with the helping hands of a top-heavy Democratic General Assembly and a heavy lift from a couple of cunning legislative leaders who rigged the system in order to deliver the pork chop for O’Malley.

That, and a little bit of luck, did the trick. Much of the O’Malley agenda were recycled programs whose time, very simply, had arrived. They received fresh impetus, unpredictably, from outside circumstances as well as the velocity of demographic and generational changes. Many of the Maryland programs mimic the Obama Administration’s legislative wish list.

The past two years, taken together, have validated O’Malley’s cachet within the cohort of liberal groups and causes both in the General Assembly and at polling places. Last year he won both legislative and voter approval of same-sex marriage and Maryland’s version of the Dream Act. He also won approval of an increase in the income tax on high-bracket earners. Combined with this year’s legislative victories, O’Malley has a progressive record that will resonate with like-minded national Democratic audiences if he decides to seek higher office.

No piece of legislation has attracted more attention and signaled a major political victory than the newly adopted gun-control bill, one of the nation’s most restrictive measures that were adopted against the backdrop of a do-nothing Congress that is bought-and-paid-for by the National Rifle Association. Maryland became the third state in just a week, joining Connecticut and Colorado, to adopt wide-ranging gun-control laws.

The gun-control law, one of O’Malley’s top priorities, bans assault weapons, limits gun magazines to 10 bullets, requires universal background checks, imposes training and testing requirements, costs a fee for State Police-issued ID cards and bans the sale of weapons to the mentally ill. Maryland will also be among six states, including Connecticut, New York, Massachusetts, New Jersey and Hawaii, that require gun buyers to submit to fingerprinting. To ease the bill through the House, Speaker Michael Busch (D-Anne Arundel) assigned the gun control measure simultaneously to two committees, one more friendly to liberal legislation than the other. Already there is talk about a court challenge or a petition drive.

And while several states are moving forward independently of Congress following the slaughter of 20 schoolchildren in Newtown, CT, 35 states are working in reverse by adopting laws that would nullify any gun control law enacted by Congress. The Supreme Court has ruled that state nullification laws are invalid.

Perhaps no new law gives O’Malley more personal satisfaction that the repeal of the death penalty, long a goal of the Governor and not his first attempt to end the practice. Maryland is the 18th state to abolish capital punishment. O’Malley had argued that the death penalty is ineffective and a waste of resources. Capital punishment had been effectively eliminated in Maryland under O’Malley, a former prosecutor, in a three-way standoff over protocols involving the Court of Appeals, the General Assembly and the executive branch.

O’Malley had the help of the Roman Catholic Church and was under heavy pressure from the NAACP, which had argued that the death penalty is disproportionately applied to blacks. On the emotional side, many legislators were swayed by the prospect of condemning a wrong person to death. Senate President Mike Miller, who favors capital punishment, stepped aside and allowed the measure to pass the Senate. The five men currently on death row will not be affected by the repeal legislation. The Governor must decide whether to execute them.

No piece of major legislation is more of an irritant to the public than the newly adopted gasoline tax increase formula, the first since 1992 and a major spike that eventually could add 20 cents to a gallon of gas. The new increase applies a sales tax on the wholesale price of gas on top of Maryland existing gas tax of 23.5 cents a gallon.

The argument for the tax increase was plain and simple: the transportation fund is broke. There are major projects and a backlog of repairs and upkeep waiting for an infusion of cash. There are four main reasons why the public is angry: (1) Over the years, governors have raided the transportation fund to the tune of $1.5 billion to pay for general fund services. Only a half billion dollars has been repaid despite a law that requires full restoration of the funds. (2) The new law is indexed to inflation. So the higher the cost of living advances, so, too, does the cost of gas rise with it. (3) The tax formula is part Rube Goldberg concoction. It relies on Congress enacting a tax on Internet sales. If Congress fails to act, the gas tax goes up an additional two cents. (4) Rural and conservative lawmakers argued that the tax is unfair to rural areas because the bulk of the money will be used to fund mass transit projects in urban areas.

O’Malley dallied and delayed over the gas tax increase plan until he was finally kicked into gear by a draft plan that was contrived by Mike Miller. The second motivating factor was that a similar, massive plan was adopted by neighboring Virginia, which competes with Maryland for business as well as high-income residents. The future of two key public transportation projects is tied up in the gas tax increase—the Purple Line in Montgomery County ($2 billion) and the Red Line in Baltimore ($2.5 billion). Both are of questionable need and feasibility.

On his third attempt, O’Malley has finally won approval of an offshore wind farm 10 miles off the coast of Ocean City. Skeptics doubt that it will ever be built. But the fact that approval was won with a sleight-of-hand by Miller gives O’Malley street credibility with certain sectors of the environmental community. (Miller rigged the Senate committee structure to ease the way for the bill which had been rejected twice in the Senate.)

The windmills, which would generate only a smithereen of the electricity that Maryland uses, would be funded, in part, by a $1.50 a month levy on all ratepayers beginning in 2017. Analysts say the amount is too little to offset the project’s cost. Private companies are saying the venture is too risky. Private capital refuses to underwrite the project. And Congress has been unwilling to authorize subsidies. No other state or cluster of states has been able to assemble a similar undertaking although they’ve tried.

While the 30 states under full or partial Republican control continue to explore ways to suppress the vote, Maryland took another step to facilitate and expand early voting. O’Malley’s early voting bill would, for the first time, allow voters to register and vote on the same day as well as add another day to the early voting calendar. In addition, the number of early voting sites would be increased, depending on population and location.

Security concerns have been resolved over one controversial provision allowing the downloading of absentee ballots over the Internet. Virginia, a red state that is rapidly turning blue (President Obama carried the state twice), is the latest GOP-controlled state to adopt a restrictive voter ID law. And North Carolina wants to tax parents of college students who vote in that state.

Other legislation that buffs up O’Malley’s report card includes: Easing the way for medical use of marijuana, which polls show is now approved by a majority of Americans; extension of a second-tier driver’s license for illegal immigrants that was due to expire in July, 2015; implementation of Obamacare in Maryland; a campaign finance package that raises contribution limits and closes loopholes on certain business contributions; a gerry-built school construction plan for Baltimore that is based on money neither the state nor the city has but anticipates from the sale of Stadium Authority bonds and future revenues from the city casino that isn’t yet built; and finally, a $37 billion budget that includes a three percent salary increase for state employees. Nobody ever said democracy in action comes cheap.