Assholes No Longer Hate the Gays 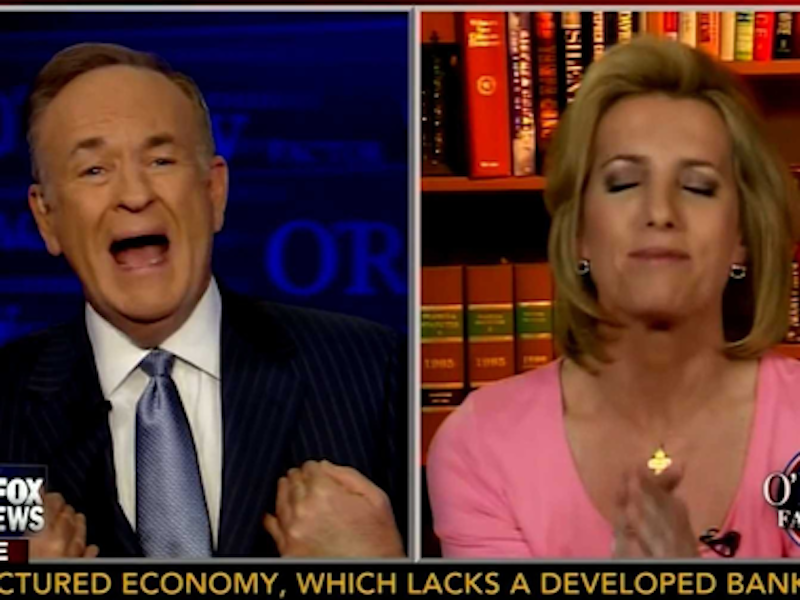 Something has fallen over in the kingdom of the Right. A pillar is down. Normal and abnormal have switched sides: fucking your own sex is okay, harping about God's opinion looks pretty dicey. The anti-gays are thinking that, belief-wise, they just became a minority and one that the majority doesn't care for. “Why'd you use the word thump?” Laura Ingraham says to Bill O'Reilly. “Why'd you use thump?”

Ingraham is here, on The O'Reilly Factor, as a representative of the community. She wears a very evident crucifix, a fat one easy to pick up on camera. She wants to know why O'Reilly now brushes aside Christian views, and why he said, “thump the Bible.” That's a slur, an offensive remark, Laura Ingraham might say if her mouth were free to do so. But it's hard for one conservative to say, “I'm being oppressed!” at another, especially a powerful one. She has to find other language, and she doesn't get far, and meanwhile there are the gale winds from O'Reilly's mouth. “Why are you shouting at me?” she asks.

The problem began last month, when O'Reilly announced his newest thoughts about gay marriage. “The compelling argument is on the side of homosexuals,” he said on his show. “'We are Americans. We just want to be treated like everybody else.’ That’s a compelling argument. And to deny that you’ve got to have a very strong argument on the other side.” The next day Rush Limbaugh, who very much dislikes O'Reilly, told Christians in his radio audience that O'Reilly had dissed them.

Limbaugh did this briefly but with a maximum of oily hesitation. The idea was that O'Reilly had been so out of line and offensive that politeness hampered any description of his remarks. Even so, Limbaugh made his point three times. “Well, so, uh, how many of you who watch Fox are Bible thumpers?” he asked after playing O'Reilly's quote. “Do you think there are any 'Bible thumpers,' quote-unquote, who watch Fox? Because last night you were sort of… marginalized on the Factor as not having a compelling argument and just being a bunch of… Bible thumpers.”

Ingraham went on O'Reilly's show to ask what was up. She started by trying to laugh matters off as a bit of head-butting between him and Rush. O'Reilly would have none of it. His baton of a finger rose up. “No, no, no, we're going to be very specific,” he said. “You made two statements that are fallacious and I'm going to correct them.” First, no feud because O'Reilly has no interest in Limbaugh's opinions. Second, no insult to Christian believers, just the observation that public policy has to be based on something other than the Bible. O'Reilly wound up with his finger near the camera lens. When the finger didn't seem big enough, he managed to slide his pen up and into position, an even bigger baton. “The 'thump the Bible' deal was a purely policy play,” O'Reilly said, and then: “Go.” He meant it was now Ingraham's special time to speak uninterrupted.

“I don't think you need to use the words 'thump the Bible,'” Ingraham said plaintively. “The people who are for traditional marriage, you're right, haven't been that good about p.r., haven't been that good about making their case.” O'Reilly listened a while, heard nothing that commanded his attention. “All right now, you had your say, that was a good two minutes,” he said, starting up. “I made a very, very honest point, and you conceded it was a correct point, that if you're going to stand up for heterosexual marriage and exclude gay marriage, if you're going to do that, you've got to do it outside the Bible. You can't cite the Bible because you're going to lose. Go.” He drew out “lose” as if “goose” was spelled with a z and “lose” rhymed with it.

O'Reilly and his guest fell into a tangle about the Bible and government. “I think that's disrespectful, to people who really are trying to lead their lives—” Ingraham said. O'Reilly could take no more. Outraged common sense was on the move. “Awww,” he growled, and he charged. “In their private lives they can!” he said. “We're talking a policy deal here.” Pawl-ah-see. “Don't you understand the difference between private beliefs and public policy?” There was no insult to Christians, he said, his remarks were a statement of political fact.

Ingraham began to wilt. “People will come up with better arguments,” she said hopefully, in passing; she meant maybe the people against gay marriage could think of a reason they could tell the public. She maundered like a liberal about O'Reilly's quote and the need for dialogue. “Some people took offense, obviously, and maybe it's a good thing to keep talking about it,” she said.

“This isn't really my issue,” Ingraham said at one point, meaning gay marriage, and she added that it wasn't O'Reilly's either. Eight years ago O'Reilly was saying that gay marriage was like letting people marry goats. But Ingraham was right: it wasn't a big issue for O'Reilly. He said what he did out of offhand contempt. For decades people could laugh off gay rights by saying “Aw, c'mon” and making a face. That was the trump card. The Bible worked too, but not everywhere; in vast parts of the country “Aw, c'mon” really did all the work. Now “Aw, c'mon” has changed sides. That's what Bill O'Reilly just told Laura Ingraham.