The Kennedy “Royalty” Myth Has Another Gasp 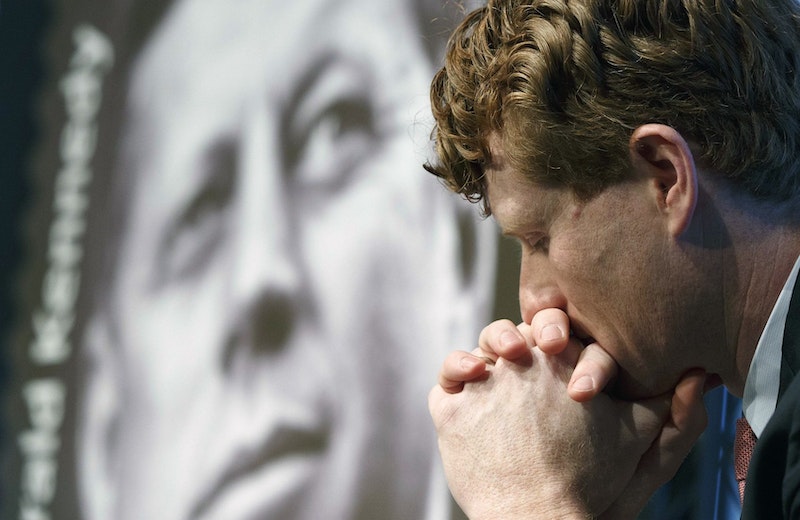 The “Dream” is nearly extinguished, but there’s still a litter of besotted journalists who hum the show tune “Camelot” on their way to work. Consider The Boston Globe’s Victoria McGrane’s opening paragraph about Rep. Joseph Kennedy III’s announcement of his Massachusetts primary campaign against incumbent Sen. Ed Markey. She writes: “Joseph P. Kennedy III, descendant of Democratic royalty and four-term congressman, opened his campaign for the Senate Saturday framing his candidacy as an urgent calling to fix the ‘broken’ system’ that has ignored the problems of many and laid the groundwork for the rise of Donald Trump, seeking to harness discontent coursing through the electorate as he kicks off a high-stakes generational challenge to incumbent Senator Edward J. Markey.”

That’s boilerplate copy, except for the “descendant of Democratic royalty” silliness. It’s now 50 years since the Kennedy “royalty” baloney went off a bridge in Chappaquiddick, MA. Teddy Kennedy, remembered more for the death of Mary Jo Kopechne, smearing Robert Bork, an incoherent 1980 presidential challenge to Jimmy Carter, alcoholism and philandering, squashed the “royalty” associated mostly with JFK (with an invaluable assist from wife Jackie) and lesser extent Bobby Kennedy. Teddy’s one enduring legacy, not long before he died, was endorsing Barack Obama over Hillary Clinton in 2008, a not inconsequential boon to the 44th president, as the absurdly lionized “Lion of the Senate” gave cover to other pols who were afraid of the Clinton Machine and were then able to ride the Obama wave.

The next generation of Kennedys didn’t do much: Bobby Kennedy Jr. was eliminated from public life after a heroin-induced nod-out out on a plane in the mid-1980s and his own womanizing. His older brother Joe Kennedy, father of the current Congressman, was a non-entity in Congress and left elective politics after a contentious divorce; the less said about Ambien Poster Child Patrick Kennedy the better, since the eight-term Congressman (though taken advantage of by other Democrats to raise money) demonstrated each time he spoke in the House that the family’s gene pool was already watered-down. RFK’s oldest, Kathleen Kennedy Townsend, an unsuccessful Congressional candidate in ’86, was Maryland’s Lt. Gov., but ran such an arrogant campaign for governor in 2002 that she lost to Republican Bob Ehrlich.

(I went to an “intimate” Ruxton, MD fundraiser for Townsend in ‘86—the press was barred, so a colleague and I had to pay admission, and were told no notebooks were allowed—and it was so dull, so unimaginative, that halfway through her remarks I retreated to the bar where I ran into a couple of Kennedy cousins, inveigled upon to “wow” the older Camelot crowd. One of them, can’t remember who, said to another, “Fucking Kathleen. Like I need this shit to ruin a night… God, I hope no one else runs for office soon. Like we’re fucking zoo animals.”)

In a family so large—and filled with scandals—I’d imagine the smarter cousins, nephews and grandchildren have some bright lights among them, but they’re wise enough to stay out of politics. Not so for young Joe Kennedy, who has family restoration on his mind. Ed Markey must be in a soiling-his-drawers haze, thinking, after decades of working in Washington as a Representative, “Why me?” For what it’s worth, the telegenic Kennedy, a redhead who’s not horse-faced like so many of his relatives, is perceived of as the “clean Kennedy,” reportedly drinking milk instead of bourbon and keeping lust solely in his heart. Seems like modern-day spiffing up of a now-irrelevant family, but who knows. It’s not fair to play guilt by association, but with any Kennedy, you have to wonder whether a #MeToo revelation is around the corner. You know Markey’s praying for that.

Nationally, Republicans are giddy over the primary battle: Markey’s Senate seat is safe for any Democrat, and the amount of money siphoned off for this race will deprive other Democrats—just like Beto O’Rourke did last year in his Texas Senate race against Ted Cruz—in very close elections of badly-needed last-minute funds.

Establishment Democrats like Sens. Elizabeth Warren and Chuck Schumer have endorsed Markey, as has, surprisingly, Rep. Alexandria Ocasio-Cortez. Warren, typically, had it both ways: she cited her endorsement of Markey before Young Joe got in, but noted that he’s an “amazing person” who was a student of hers at Harvard Law. That’s her piece on the MA race, and now she’s back to selfies with Iowans and proclaiming how delicious! the food is there, like a strawberry rhubarb pie milkshake she posted on Twitter (and probably had one sip of). Because of his late entrance, Kennedy has few local and national endorsements in his pocket, but that’s probably fortuitous, since he can run—incredibly—as the young (38) “outsider” against the aging Markey, born in 1946, the same year Joe’s grand-uncle JFK was first elected to Congress.

Kennedy muffed his response to Trump’s State of the Union Speech in 2018—not that anyone watches—with pedestrian rhetoric. Then again, Ted Sorenson’s dead.

Last year, I thought Kennedy was a smart bet to run in the Democratic presidential primaries: the immediate charges of “entitlement,” bandied about now by the Markey campaign, were negated by Trump’s strange route to the presidency. If Trump could win, why not the grandson of RFK? There was some chatter about Kennedy running, but his weird stance on marijuana legalization—a tic among the Kennedys—was out of sync and I’d guess he decided to wait on the White House. (This is written as the political establishment is in either an ecstatic state or lather over the possible impeachment proceedings against Trump.)

But think of how entertaining a Trump-Kennedy campaign would’ve been? No other Democrat, save Bernie Sanders, could provide such a larger-than-life spectacle.