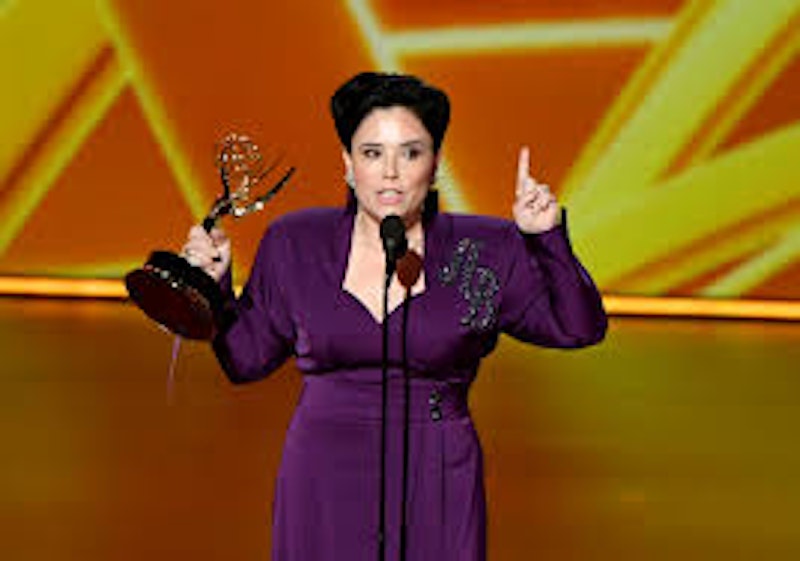 Alex Borstein's Emmy speech was hailed as an inspirational feminist rallying crime. To me, it sounded disturbingly like a queasy exercise in Holocaust victim-blaming.

Borstein deservedly received an award for her wonderful supporting role as Susie in The Marvelous Mrs. Maisel. She used her awards speech to tell a story about her grandmother's experience during the Holocaust.

My grandmother turned to a guard, she was in line to be shot into a pit, and she said, “What happens if I step out of line?”… And he said, “I don't have the heart to shoot you, but somebody will.” And she stepped out of line. And for that I am here and for that my children are here.

Borstein then suggested that other women should follow her grandmother's example. "So step out of line, ladies. Step out of line."

The anecdote is obviously meant to serve as a call to arms for women and especially for women immigrants who are currently targeted for violence by a bigoted right-wing administration. Borstein is encouraging women to refuse to kowtow to power. It's a powerful message at a time when women are speaking out against sexual harassment and violence in the #MeToo movement, and when women are organizing political protests, and running for office in unprecedented numbers.

In that context, it's understandable that many people found Borstein's words powerful. But in praising her grandmother, and setting her up as a model, Borstein casually, and unwittingly, denigrates all those people who didn’t survive. Her grandmother stepped out of line. But what about all the others who did not step out of line? Did they deserve to die because they had insufficient gumption and determination? Could people really have escaped death by just refusing to follow orders? If so, we'd have to consider those six million victims culpable for failing to stand up for themselves.

The six million victims weren't culpable. People who survived the Holocaust didn't do so because of superior virtue or determination. Protesting, or stepping out of line, was as likely to get you killed as save you. Survivors were mostly just lucky. They found people to help them. They weren’t selected for death in the camps. A guard wasn't prepared to kill them on the spot, as appears to be the case with Borstein's grandmother.

Americans really like stories of spunky individualists who defy convention—stories like The Marvelous Mrs. Maisel. But those tropes are ill-suited to descriptions of systemic and systematic oppression. The rationale behind the Holocaust was that people were not treated as individuals. People weren't killed for failing to step out of line. They were killed for being Jews, whether they stood in line, or ran out of line, or never even made it to a line. Genocide treats entire groups of people with the same inhumanity. ICE agents don't care if the undocumented people they target are smart, kind, rebellious, or meek. They throw them in the camps all the same.

Hollywood and television are good at telling stories about how exceptional individuals triumph. Those stories are supposed to encourage you, and you, and you, to be an exceptional individual too. Borstein is simply plugging her grandmother, and her history with the Holocaust, into the usual Hollywood message. But the Holocaust isn't an inspirational story, and exceptional meritocratic individualism isn't an adequate response to genocide. It's indecent to celebrate survivors for their brave survival tactics when so many people, brave or otherwise, are dead.

We do need people to step out of line and resist. But we also need to keep faith with those who’re lost. If we really want change, we sometimes have to put aside exceptional heroes, and instead work together.