Darker Side of Canadian PM Revealed

The champion of diversity in trouble. 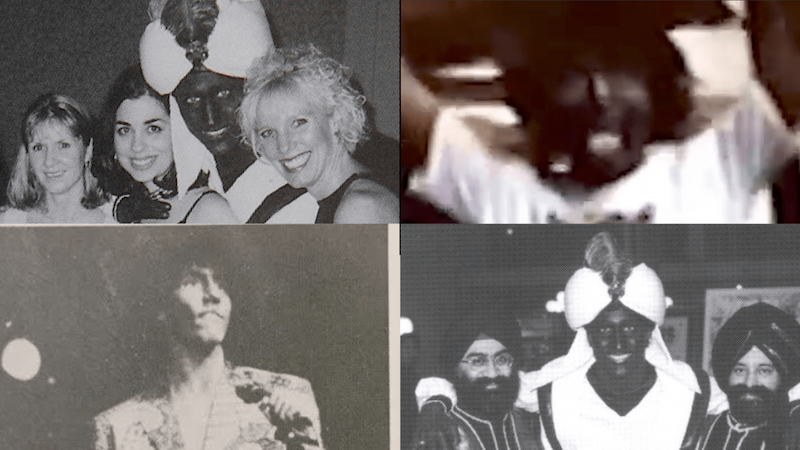 It may surprise Americans to learn that the morally superior Canada, with its government healthcare and proud diversity, also has a long and checkered history of blackface. But who'd have thought that uber-progressive (cosmetically, at least) Justin Trudeau, who seems to feel his own pain whenever a microaggression's committed within his nation's borders, was going to serve as the latest reminder of those painful memories?

Before the blacked-up images surfaced, Canadians were already aware of their preening PM leader's love of dressing up in exotic outfits, a propensity on full display during his widely-ridiculed trip to India last year when he and his entire family had more costume changes than a Katy Perry concert. But until recently, few had any idea just how far Trudeau was willing to go to achieve verisimilitude in his get-ups.

Three instances of Trudeau, once thought of as Canada's real-life Disney Prince, wearing dark makeup have been documented so far, and it looks like more are coming. The Washington Post, which is quick on the trigger on such matters, has declared that Trudeau's hyperrealistic cosplay indicates his racism, even though it has no way of reading what was in his head when he was a 29-year-old teacher nearly two decades ago and made the poor decision to darken up for an Arabian Nights party. A photo of the Liberal leader wearing an Afro wig has also emerged, and he's admitted to darkening his skin and singing "Day-O" during a high school talent competition as well.

The incriminating evidence produced so far is incontrovertible proof of racism to the unforgiving portion of the Left, and merely a manifestation of a bratty sense of entitlement to the rest of them. To conservatives, who are used to being called racists without any evidence, it's a source of both anger and amusement.

But it's not as if the Liberal Party leader was caught in a moment of candor embracing the ideas of his fellow Canadian, Stefan Molyneux, on the intellectual inferiority of black people. Trudeau's guilty of insensitivity. Still, there's chatter that his earlier (29's a bit late for "youthful") indiscretions have endangered his reelection campaign, even though he's apologized repeatedly to the people he refers to as "racialized Canadians."

For a sizable percentage of the population, there are no gradations of guilt level when it comes to racially-insensitive actions, regardless of the perpetrator's track record. This means the fact that Trudeau's transgressions were long ago and weren't done in the racist spirit of 19th-century minstrel shows aren't mitigating factors in the price he must now pay. To this group, Trudeau's no different from the frat guy who got caught on one leaked video reenacting Al Jolson's blackface performance of "Mammy." His time's up.

Trudeau's intent behind his offensive behavior is irrelevant to fundamentalists—they don't even want to know what was in his mind, or whether there were different norms at the time. This group's in the habit of enforcing current norms retroactively on past decades when old dirt comes to light, which is why anyone with a prominent new job can expect their social media posts—and even "likes"—from their teenage years to go public.

Few objective observers of Canadian politics believe that Trudeau's suddenly a racist. His father, former Prime Minister Pierre Trudeau, is the one who set the stage for the current shrine to diversity that Canada's become. In a reasonable political climate, people would be defined by their words and actions over the years, not the handful of times they'd exercised poor judgment. Had someone explained the inappropriateness of his past actions to him at the time, I doubt Trudeau would’ve continued doing them.

While the indignation level's easy to mock, there's also an irony involved that his detractors are delighting in. After all, Trudeau's the guy who once interrupted a young woman who'd said "mankind" while talking to him, and scolded her with, "We like to say peoplekind," before she could even finish her sentence. Once the relentless slayer of politically incorrect thought, the embattled PM's now like the strident vegan who's just gotten caught tucking in to a Whopper at Burger King.

While it's hardly a positive development that Canadians may vote someone out of office—the person the international media once lauded as the antidote to Trump—based on a single aspect of his personality 20 years ago, it's hard to sympathize with Trudeau knowing that he'd go after anyone finding themselves in a similar predicament. For a Trump antidote, he sure is a phony.

This incident has predictably shone more light on the media's inherent bias when a progressive's caught in compromising circumstances. Don Lemon gushed over Trudeau's apology. "Wow, we don't often see that here," he enthused on his CNN show, shifting the focus to Trump. NBC fired Megyn Kelly, even after her abject apology, for merely suggesting that darkening your skin in certain cases isn't always as serious an offense as minstrel show blackface. Here's Lemon on Kelly: "Megyn is 47 years old; she’s our age. There has never been a time in her 47 years that blackface has been acceptable.” Justin Trudeau is 47 years old.

Lemon's as much of a hypocrite as Trudeau, but perhaps hypocrites can be cured with enough public shame. If that happens, and the PM manages to get re-elected next month, we can at least hold out some hope that he'll return chastened, having left his hectoring, holier-than-thou persona in the past, along with the rest of his mistakes.