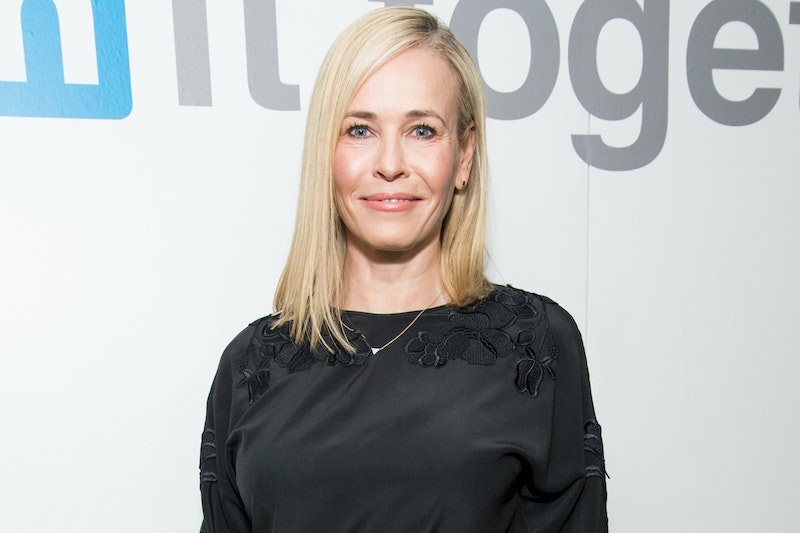 At the beginning of Chelsea Handler's new Netflix documentary, Hello Privilege. It's Me, Chelsea, the comic-turned-activist talks about moving to L.A. with $300 and making it because she was white and pretty and had a big mouth. "And for some reason that was rewarded in Hollywood," she says, sounding disingenuous, as if her talent, drive, and work ethic played no role in her success in Hollywood. Just a few minutes in and Handler's sounding false notes.

Now, decades later, the guilt's kicking in. To atone, Handler, employing the canned, cultish shop talk of intersectionality, says she wants to become a "better white person to people of color without making it a thing,” even though making a film out of it makes it a "thing." She's warning us that what's to follow is unvarnished propaganda with the nuance of a snuff film and the painful earnestness of an episode of Mr. Rogers.

Handler personalizes the issue, even to the point of including herself in the title, because the film is really all about her, a guilt-ridden, once-funny person who used to tell insensitive jokes about blacks, lesbians, Asians and AIDS, and probably realizes now that she was lucky not to get cancelled. To save her tarnished soul, she's taken on a white-savior persona to lecture the unenlightened.

Handler's black driver takes the blonde penitent to an open mic event dedicated to "white privilege" where troublesome topics like "whiteness" are discussed. In case you don't travel in the right progressive circles—the narrow target audience for this film—whiteness refers to various aspects of racial identity, racial bias, and racial privilege that are shared by all white people. The rest of the earth's inhabitants, however, are fortunate enough to be judged the Martin Luther King way—by the content of their characters.

At the event, a black man shames Handler for naming her book Uganda Be Kidding Me, and she looks sufficiently contrite. There's one sin to check off the absolution list so she can better enjoy all the cash she made from that best seller. Handler gets back in her limo after the struggle session and explains that one thing she's just learned is she got to make this documentary because of her privilege. "I enjoyed being put in my place," Handler informs us as she's being driven back to her permanent place in the verdant foothills of the Santa Monica Mountains to recover poolside. Viewers may be tempted to ask themselves why they're bothering to watch the work of a self-described mediocrity who's always coasted by on her looks and skin color.

Next, author Tim White (Dear White America, White Like Me) who Handler describes as an "expert on whiteness," visits her Bel Air home that's so posh, she says, that it's made her realize her white privilege, which ironically has led to her getting another Netflix film. Handler tells White, who's white, that being able to walk down the street and feel safe is a matter of white privilege. White talks a lot about privilege, but offers no practical advice to whites about how they can work to close the privilege gap. He peddles platitudes that make people feel better about themselves but require no sacrifice or action. In other words, he's the perfect Hollywood guru.

Handler, while talking to a black woman who's a historian at Emory University, tells her that she's about to head down to an Octoberfest in Georgia. "Hopefully," she says, "I'll talk to a bunch of white racists." It's left to the historian to provide a voice of reason, which she does by telling Handler not to assume they're all racists. Handler responds, while comically scrunching up her face, "But if you are at an Octoberfest…," implying that Octoberfests are something like the new Klan meetings.

Handler, who recently said on The View—sounding like Patient Zero for Trump Derangement Syndrome—that she needed psychotherapy before going to Georgia and interviewing all those racists, sure enough finds some of them who don't subscribe to her white privilege theory to interview, and we learn what ignorant buffoons all Southerners are.

Near the end of the film, Handler travels back to her hometown for a reunion with her old boyfriend, Tyshawn, from when she was 16. He's a black man who did 14 years behind bars for armed robbery, due to—you guessed it—white privilege, even though he had football scholarships lined up in high school. Handler was feeling sheepish over her more upward career trajectory, but she's taken care of that now.

If Chelsea Handler, who once asked Al Sharpton why she couldn’t joke about fried chicken and watermelon, really wants to accomplish something tangible and make up for her ill-gotten riches, she could sell her house in a white upper-class enclave and move to diverse Culver City to live among minorities. She could donate the cash this would put in her pocket to a scholarship fund for black inner-city kids and cajole her privileged Hollywood friends to pitch in. This would get more done than all of the talk about white privilege in American classrooms, Vox explainers, and intersectionality conferences ever has. But why do that when you can keep everything while moaning about your privilege?

Handler has produced the perfect balm for the elites now in control of the Democratic Party who yearn to sound like champions of America's black population, just as long as it doesn't take any cash out of their pockets.