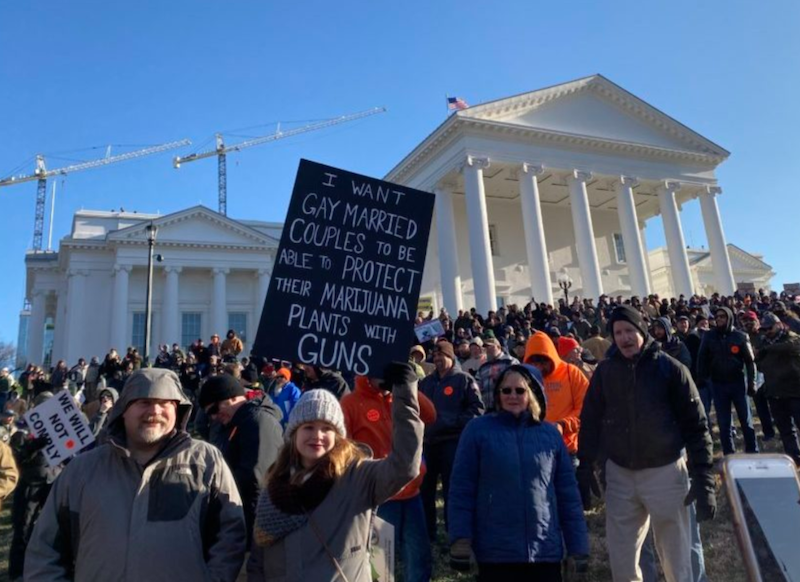 Some 22,000 people protested against increasingly restrictive Virginia gun laws on Monday, and despite the fervent hopes of many leftists that something would go awry, something awful that could be pinned on the right, it all went peacefully. As sci-fi author Robert Heinlein so rightly observed, an armed society is a polite society.

Yet the leftward-trending, emergency-declaring government of Virginia reacted to that (routine, annual) rally with a far greater sense of crisis than, say, New York City’s government has reacted to the mounting tally of crimes committed by people set loose immediately after arrest, under a new law saying it’s unfair to make them post bail first. Our priorities are askew.

Ironically, much the same liberal establishment eager to take away the peaceful Virginia crowd’s means of self-defense—using the force of government to do the taking—was preparing its defense of the international arms industry for the next day. That’s not how they phrased it, of course. They’d say they were preparing for the Tuesday start of President Trump’s impeachment trial in the Senate, over the undue pressure he put on Ukraine’s government by threatening to withhold arms shipments from them.

But you obviously don’t get numerous CIA agents, defense-linked members of Congress, and establishment members of media and academia freaking out—and demanding the end of a presidency—over that president exercising routine political pressure.

They claim they were defending the sanctity of democratic processes here in the U.S., not wanting Joe Biden unduly investigated by Ukraine during an election season, but the underlying reason they care specifically about Ukrainian arms shipments is the $2-trillion-plus annual arms industry, which would shrink rapidly if its dependency on crony politicians—and some of those politicians’ indirect ties to energy companies—were on full display. That is, the defense industry would shrink if politicians’ arms and energy ties were abruptly cut off by concerted political action, or by just one ornery president, rationally or not.

Not that there’s much chance of a real crackdown on the (taxpayer-assisted, simultaneously capitalistic and socialistic) arms industry, nor on the violent pro-government and anti-government forces around the world that ostensibly justify its activities. Notice, this impeachment suggests the establishment freaks out more if a president threatens to stop arms shipments than if, say, he lobs a missile at Iranians or sells (terror-spawning) Saudi Arabia $350 million worth of arms, as Trump agreed to do almost immediately upon taking office, in keeping with the standard business practices of his predecessors from both parties.

Notice too the pattern, exactly the opposite of that which the liberal establishment would have us believe exists, of private gun-owners doing less harm than government-subsidized and government-controlled arms (as well as arms wielded by those seeking to become governments) around the globe. The NRA didn’t cause World War I. The Black Panthers didn’t napalm Cambodia. Here’s hoping a rule-breaking Trump stops many more arms shipments.

Throwing his weight around in that way would hardly be the most tyrannical, monarchical thing a president has done in the past several decades—but then, does the current cultural establishment of the U.S., right or left, dislike monarchy anyway? From the perpetual fawning over the British royal family, who I’d swear we fought a couple of wars to escape two centuries ago, you’d think America’s favorite political system is monarchy.

Some on both right and left, for different reasons, have been criticizing Prince Harry and Meghan Markle for saying they’re fleeing the UK monarchy, possibly moving to Canada, and apparently seeking new post-royal gigs, with Harry recorded surreptitiously seeking voiceover work for Markle from Disney. Fantastic, I say! Instead of seeing this as too crassly commercial or as heretical defiance of tradition, I say it’s another great victory for the American way and another step away from violence.

The two of them will likely continue to eat up taxpayer dollars in one way or another (housing, security), which is wrong, and they may add insult to injury by pushing various left-wing causes the way Prince Charles does, but the world will get the unmistakable larger message: Monarchy ain’t all that. Humanity labored for millennia under kings, and it’s wonderful that we now live in an era when being a Disney princess sounds more appealing to some people than being (something akin to) a real princess (duchess, whatever). Disney was built on sales to willing customers, whereas monarchy was built on violence, conquest, and superstition about special bloodlines.

Don’t be like Gwyneth Paltrow, Zoe Saldana, and Kate Hudson, making a lavish, lengthy promotional video for monarchical (and gayness-, alcohol-, and speech-restricting) Dubai. Might that be what Ricky Gervais meant when he complained his celebrity-filled Golden Globes audience would probably be willing to star in al Qaeda videos? In any case, better to have celebrity beauties who help end monarchies than ones who encourage them.

A future where all guns are private and the only crowns in sight advertise Burger King is exactly what our ancestors fought for.