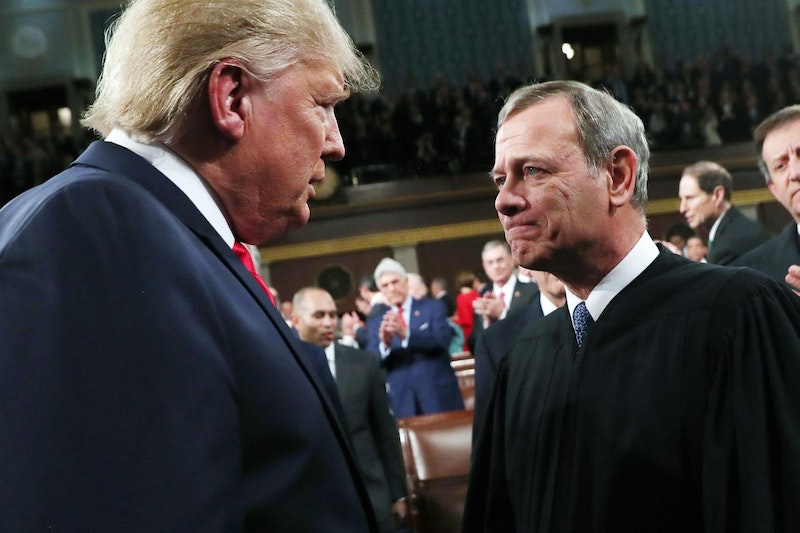 Lost in the daily hysteria of what my colleague John M. Harris calls the “moronosphere,”—at least until Joe Biden assumes office, which is when I predict 82 percent of Twitter posts will pictures of dogs/cats/finches/fat men, self-congratulatory notices of staying sober for five days, and requests for prayers—is the ire of many right-wingers aimed at Supreme Court Chief Justice John Roberts, the 65-year-old who was confirmed in 2005.

[Complaints about Roberts are temporarily on the back burner, as brave online #Resistance members still bray about Trump’s dumb call last Saturday to Georgia’s secretary of state Brad Raffensperger—causing the always-hysterical Andrew Sullivan to call for Trump’s impeachment two weeks before he leaves office; Sullivan’s as nutty as the man he disparages—calling the outgoing president a “traitor” guilty of “sedition” while Trump’s loyalists scream back at them, the Democratic Senate victories in Georgia, and the ongoing bungling of getting citizens vaccinated for COVID (New York’s Andrew Cuomo; and one hopes that recall efforts against California Gov. Gavin Newsom are successful for his willy-nilly handling of the pandemic, which has burned up many of my more liberal California relatives.]

(And I’m glad the presidential certification formality appears to be over, after yesterday's stunning events in the Capitol. Journalists may continue to bray about "the death of democracy," but this was no coup—you need the military for that.)

Roberts had the temerity last month, along with his colleagues, to dismiss the Texas lawsuit questioning the results of November’s election. He’s been branded as a “moral coward” and a boot-licker who’s trying to appease Democrats. And recently, Roberts has endured accusations of “deep state” connections, who illegally adopted his children and was a pal of Jeffrey Epstein.

Trump, in a snit (which he may or may not remember, depending on the generosity of Dr. Robert), has called Roberts “an absolute disaster,” which is either a plus or minus for the Chief Justice, a man known for his collegiality and refusal to get ruffled by politics, unlike Trump, and to a lesser extent Biden, who live in different worlds, but both enveloped in hyperbole.

Roberts strikes me as the least “political” member of the Supreme Court—at least compared to Justices Sotomayor, Kagan, Thomas, Kavanaugh, Alito, Gorsuch, Barrett (probably a reliable conservative vote, but too early to tell) and Breyer, whose votes almost always fall to their liberal or conservative leanings—and his votes are unpredictable. I agreed with his yay on Citizens United, disagreed strongly on his upholding Obamacare; think his abortion view are sensible (no desire to eliminate Roe v. Wade, but against partial-birth abortion) and was glad the legalization of gay marriage was affirmed, despite his objections.

Still, though perhaps naïve, I admired Roberts’ insistence in his 2005 hearings that he believed a justice should be an “umpire” rather than political advocate. And he’s held the position of Chief Justice for long enough that surely conservatives and liberals (remembering, for example, Earl Warren and Byron White) know that Supreme Court justices’ views often change over time. (I don’t suppose Roberts’ umpire analogy was original, but it made sense: as a kid, I remember, on the occasion of rare, or at least discovered, questionable activity, my mother was a tenacious prosecutor, I was the defendant and my dad was the judge/umpire. Dad split down the middle, sometimes winking at me, and all parties were pacified.)

(This isn’t related to Roberts, but isn’t it time to affix a term limit for SCOTUS appointees, say 20 years? And members of Congress as well: the late South Carolina Sen. Strom Thurmond set the bar for infirm men and women in office (he was 100 when he retired), but today Sens. Dianne Feinstein (89) and Charles Grassley (87) are prime examples. Joe Biden’s another story, with his nearly-certain cognitive impairment at 78, but I’d imagine this is a fleeting era in American politics when the old age of leaders rivals that of China.)

Reason’s Damon Root wrote a smart article on Dec. 29, in arguing, contra conservatives, that Roberts has a judicial strategy: “I am referring to the philosophy of judicial deference or restraint, which, in a nutshell, is the idea that people should take their complaints to the ballot box, not to the courthouse. This view once occupied the commanding heights of the American conservative movement, exemplified most famously by the writings of the late conservative icon Robert Bork [Bork was also famous for the disgusting spectacle Sen. Teddy Kennedy engaged in during Bork’s failed Supreme Court hearings in 1987]. ‘In wide areas of life,’ Bork argued, ‘majorities are entitled to rule, if they wish, simply because they are majorities.’ That means the courts should butt out. Bork did not invent this view. Rather, he inherited from certain towering legal figures from the early 20th century. The most influential of them was Supreme Court Justice Oliver Wendell Holmes Jr., who repeatedly preached ‘the right of a majority to embody their opinions in law.’”

As I’ve written previously, in both the 2016 and 2020 presidential elections, I didn’t support Trump, Hillary Clinton or Joe Biden, taking the Libertarian route. That was near-apostasy for several good friends who voted Republican up until Trump, an indication that I was far too frivolous in assessing (and dismissing as a cycle in politics) the current state of the GOP. I don’t at all care for the likes of Josh Hawley, Mike Pence, Tom Cotton, Ted Cruz and Marco Rubio (who once showed promise) but do see the very surprising success of Republican House candidates in November as a hopeful harbinger of the future. Additionally, I expect most of the GOP will bid Trump farewell and recalibrate their politics.

I’ve no idea of the landscape of presidential politics that will begin after next year’s midterms, but as of now would be happy if Sen. Tim Scott is nominated to oppose, presumably, Kamala Harris.