The Crazy World of Trump/Biden

Arthur Brown’s got nothing on this lick, baby. 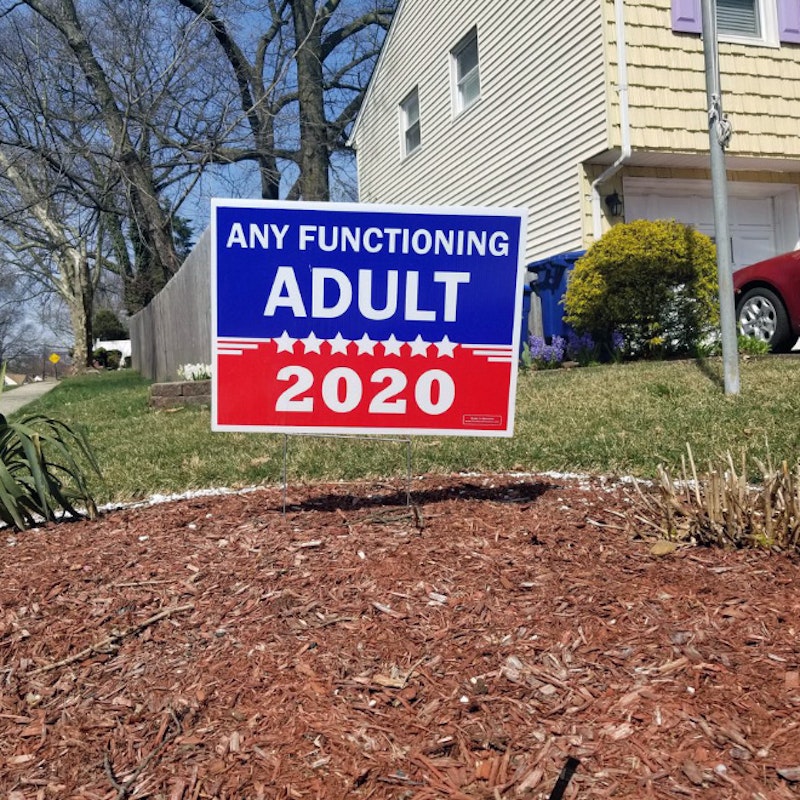 On occasion, I’ll take a glance at my past political columns. And wince. On Sept. 29, 2016, I wrote the following: “Accepted: The United States is currently embroiled in the angriest election of modern times.” That was true!

“Rejected: America is not on the precipice of fascism, if Donald Trump is elected, or unfathomable government corruption should Hillary Clinton win in November.”

Still fairly accurate, I think. We’ll never know what Clinton would’ve done, but the country as a whole is not a fascist state today, despite too many whiffs of it. That’s a matter of contention, but as of now, dissidents haven’t been jailed or shot, and the First Amendment still stands, unlike, as is finally accepted, during the presidency of Woodrow Wilson.

This is where I’m out to lunch: “The presidential election of 2020, no matter the candidates, will not be bruited about with the same ferocious gusto of this year. On a related note, perhaps news organizations won’t release polls every 12 hours for obsessives to stew over.” I added that if Trump won, he probably wouldn’t run again, his gnat-like attention span sated after six months.

Even before COVID-19, the 2020 election became the most “bruited about” race in “modern times.” And as for fewer polls, my hope that constant (and largely meaningless) polls would appear less frequently was dashed in, oh, about February of 2017.

This year’s upshot? I don’t think anyone will be happy on November 3rd and beyond, for who knows when the election will be decided. Partisans on both sides are breaking out in hives: Democrats are worried that, if you believe the media, that Trump is gaining traction with Hispanics; Trump supporters (some Republicans, some nuts, some independents, and the wild card of suburban moderates who are scared by the spate of riots, businesses burned to the ground, cops either out of control or turning the other way when a crime’s committed, and the non-peaceful actions of Black Lives Matter and those associated with that movement, which isn’t exactly well-coordinated) are certain the election will be overturned by the Deep State.

Perhaps it’s mid-September alarmism—the Sept. 29 Cleveland debate, in the absence of traditional campaigning, does loom as pivotal, with both candidates doped up to stay alert for two hours—but with the combination of regular voting and in-mail votes, how can anyone possibly believe this election won’t be muddied, or stolen, by lawsuits and fraud? What party will employ the most tenacious lawyers to contest results in perhaps a dozen states? What party will employ the most devious goons to take advantage of a hobbled USPS and throw bags of ballots in an incinerator or produce bogus votes? This isn’t paranoia: every legal and illegal maneuver is on the table. That’s why it’s so foolish to pay attention to the journalists (none are neutral) offering analysis on this or that national or state poll, as if anything traditional is a factor this year.

The Wall Street Journal’s Daniel Henninger last week was on the money about the unpredictability of this election: He wrote: “Arguably, we are going to have parallel elections for the same office. [Based, he says, on Trump’s in-person voting and Biden’s mail-ins.] Not even close to arguable is that both Donald Trump and Joe Biden will claim each won his election. Dueling inaugurations, anyone? Portland’s permanent political street-fighting could be coming to a neighborhood near you… Are we really going to allow a national political crisis caused by a demonstrably flawed voting system to just, you know, sort of happen? A half year on, the pandemic has short-circuited independent or helpful input form much of the nation’s leadership on protecting the election.”

You can’t keep track of the ludicrous essays on the 2020 election, even if so inclined, since there are far too many to keep up with. One that’s popular with right-wingers is the warning, in The American Mind, from Michael Anton (a former national security officer in the Trump administration), that “Democrats are laying the groundwork for revolution right in front of our eyes.” According to the far-right Anton, unless Trump blows away Biden on Nov. 3 (highly unlikely), Democrats have plans for removing Trump from office with the aid of the military and riots in the streets. Anton’s advice: “[The Trump Administration] needs to set up or shore up—now—communication channels that don’t rely on the media or Big Tech. Once the ruling class gives word that the narrative is ‘Trump lost,’ all the president’s social media accounts will be suspended. The T.V. channels, with the likely exception of Fox News, will refuse to cover anything he says… He’s going to need a way to talk to the American people and he has to find the means, now.”

I get that 2020 is a very unusual year, socially and politically, but the military is going to remove Trump if the election results are uncertain? That’s a preposterous kind of crazy that makes Breitbart look like C-SPAN. Years ago, Anton would be escorted to the funny farm, but now he’s Paul Revere to a (tiny, I think) segment of the electorate.

On the flip side, The Washington Post’s op-ed columnist Dana Milbank, every bit as fried as Anton, wrote an ad for Biden on Sept. 14, saying, “President Trump has done everything in his power—and some things outside his power—to sabotage the vote.” Milbank is confident that Trump’s “sabotage” and “vandalism” won’t work because of his faith in American democracy. But just in case, he says: “Want to help? Sign up to be a poll worker at powerthepolls.org, or contact your local election office.”

And then there are the lost souls, like Mychal Denzel Smith, who wrote in The New York Times that even a Biden win won’t cure his “Trump Anxiety Order.” Smith is open about his tendency toward depression—stemming from the murder of his cousin when he was 12—and says Biden’s election “is hardly a balm in and of itself.” This is a guy who won’t be pleased no matter what the election results are.

He writes: “Some of us broke four years ago and haven’t recovered. Along with so many others, I had to ask myself what it meant to live in a system that allowed for a proudly racist and sexist representative of the capitalist class to seize presidential power.”

Did Trump “seize” power in 2016? Is it my own fantasy that there was an election and he defeated Hillary Clinton? I’ve joked in previous columns that “I’m the Urban Spaceman” from the late-1960s, but maybe the joke’s on me. Might have no speed. I can’t tell.