The late Justice adjudicates a couple of quick cases before receiving her Eternal Reward up above (I’m assuming). 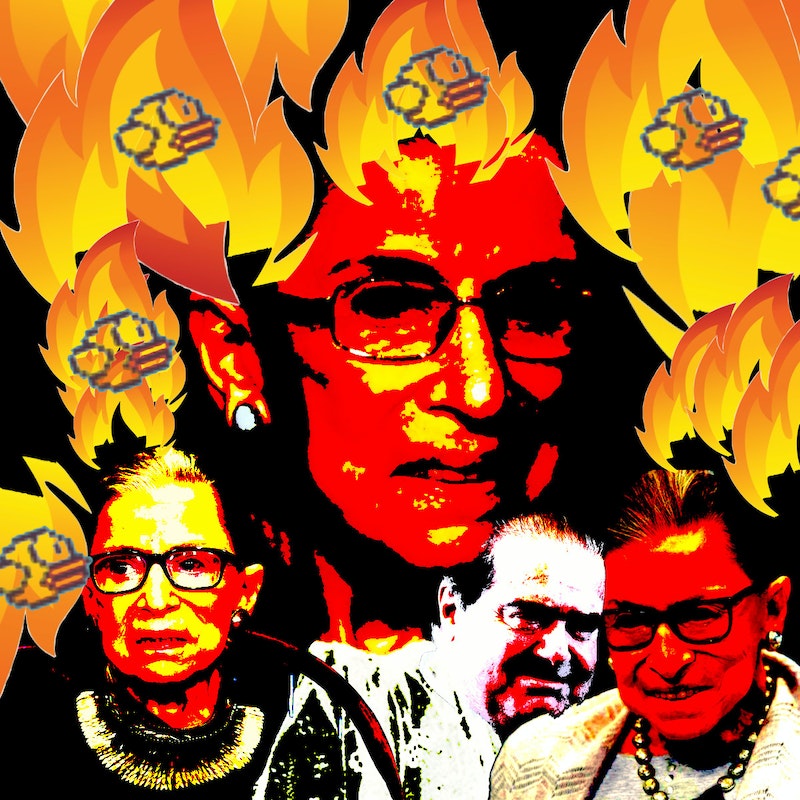 Ruth Bader Ginsburg is dead, but she’s not in hell. She’s not in heaven, either. She simply does not exist. Generational control of the Supreme Court has likely been handed to the GOP. Her status as a feminist sentinel and the only remaining bulwark against a conservative majority on the court obscured her center-right politics, although plenty of past opinions circulated over the weekend. Colin Kaepernick kneeling was “dumb and disrespectful”? Too late to change your mind on that one, Ruth!

But let’s imagine that Ruth Bader Ginsburg is adjudicating cases in Hell as we speak. A quick stop on her tour of the afterlife. It’s a party! All criminals of the world past and present sit before the still-warm judge as she warms up even further and adjusts to her new throne (bone). COURT IS IN SESSION!

She looks around, surveying the chambers. Everything is on fire but the courthouse in Hell is rather nice. There are a lot of talented people in Hell. Jimi Hendrix walks by, burning an American flag, oblivious to the proceedings. All is well, for Hell is well. Ginsburg sneers at the Black man burning the American flag. She’s not amused. “Get him out of here,” she barks to a clerk. No one moves. Ginsburg gets up and looks around. Her entire staff is made of skeletons and none of them will do anything she tells them to.

She remembers her comments about Colin Kaepernick. She remembers how she said his kneeling was “dumb and disrespectful,” but doesn’t think this landed her in Hell. Ruth Bader Ginsburg’s not in Hell, she’s simply on contract, a mercenary judge on visit. I mean, Jesus man, she just died. Let her do her thing…

“Are any of you named Emily Bazelon?” No one replies. “Oooooookay… guess I’ll be reading to an empty room then…” She looks up, again squinting to see the damned souls sitting before her. Everyone is just a little too charred and crispy to make out, but she can tell some of them probably read Slate. “Well, maybe you saw this… Emily Bazelon wrote this about me seven years ago… I was just handed this, I’m reading it for the first time… Okay, here we go: ‘Only Ginsburg, though, seems to face the retirement music wherever she goes, forcing her to repeat her not-yet determination. Yes, she’s older than Breyer, and yes, she did have early-stage colon cancer in 1999 and very early-stage pancreatic cancer in 2009. But she’s also a small, slender woman who speaks in low tones and looks like a bird. People tend to assume she is frail when in fact she is anything but. (The Notorious R.B.G. Tumblr exists to showcase her actual toughness.) All the ‘Ruth, haven’t you had enough?’ talk starts to seem a wee sexist.’"

“What did she say about me? I am bringing her down here… I want to see this woman again. I ‘look a bird’? Who says I look like a bird?” She looks up and addresses the room. “Any of you have an opinion on that?” Everyone in the courtroom remains silent and still. It seems like nothing can reach them. “Right. Well, let’s get on with it then. I want to see her.”

An orderly with orange wings rushes up to Justice Ginsburg’s side and whispers in her ear: “Not her time.” Ginsburg pauses, moves back, and sizes this thing up. Some kind of fallen angel? An overeager intern? A relative I don’t recognize? They look terrible… But she snaps back. “What do you mean ‘not her time’? Isn’t there anything we can do about that?” The orderly is stunned. “No, of course not. Why would you ever say that? This woman has a long, happy life ahead of her.” Ginsburg bangs her gavel. “WELL I DON’T!” She keeps banging the gavel until the wood of her desk begins to chip. “GET HER DOWN HERE! At least for a little bit…” The orderly shrugs and walks away. “I’m sorry, Justice. Maybe you’ll meet again someday.”

“I HAVE NO MORE SOMEDAYS!” With a poof the orderly is gone. A fireman stands up. He approaches the bench and takes off his helmet, holding it sheepishly against his belly. He looks at the Justice with saucer eyes. The man has seen some unbelievable things. “Yeah, Mrs. Supreme, whatever you name is—I looked up something you said about abortion.” Oh, good… “Yeah I didn’t find it so good myself. And I quote: ‘Frankly I thought at the time [Roe v. Wade] was decided, there was concern about population growth and particularly growth in populations that we don’t want to have too many of.’”

Everyone’s stunned. The Justice leans back in her chair. She’s been had—even in Hell. Will she ever get to reap her Eternal Reward? I never said that… “It’s right here! What the fuck is wrong with you? How many of those babies are down here with you right now?” Well, I’m not staying long term, I’m just on tour before I go upstairs… “Yeah, not if I have something to say about it! Come on, everyone!”

Everyone in the courtroom suddenly bursts up and grows wings and attack the Justice, who ascends above through the Seventh Seal. They will not get her today. Finally, time to talk to Antonin again…

She looks down. One last look at Hell. Among the crowd, she spots a portly tan man lumbering around in familiar robes. She recognizes her friend among the hoi polloi in Hell while she arrives in the waiting room for Purgatory.

And all is well in the Kingdom of Heaven.