“Opening back up” while new strains spread and mandates are reinstated increases the horrible absurdity of a situation long past parody. 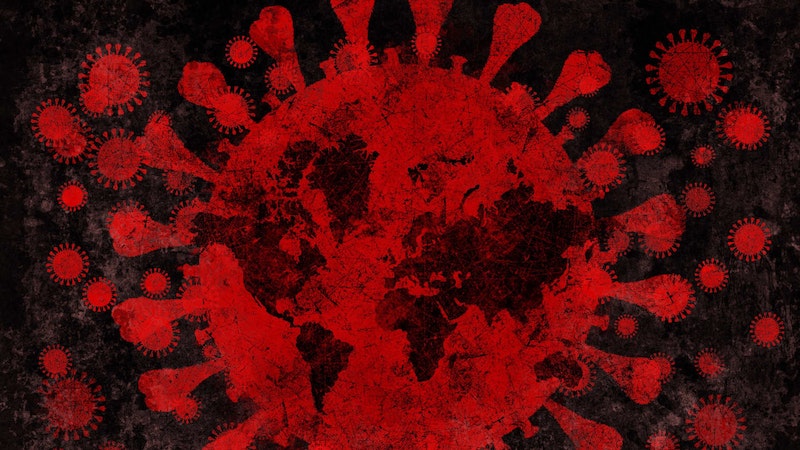 The situation’s changing. Our country, and most of the world, are caught between two worlds, two modes of being, and we risk being human wish-boned if it goes on any longer. I wrote this for Splice Today in January 2020: “End of days? Should I become born again just in case? I don’t want this coronavirus, I hate that it isn’t even a proper noun. I don’t drink but it’s too appealing a name for a mysterious and deadly disease.” I apologize for speaking “COVID-19” and “SARS-CoVid-2” into existence, but I’ve taken control of the coronavirus pandemic in the absence of any real meaningful leadership in America. I’m Alexander Haig, and I’m in control here.

So in light of the highly contagious Delta Variant making its way to our shores just like a new James Bond movie, and the appearance of expansion pack “Delta Plus” in San Francisco, I’m staying the fuck inside. Not really: nothing has changed. I never threw my masks away or switched the routine I’ve had for the last year and a half. Why bother? Even if Jen Psaki, Queen Rat, says the country won’t lockdown ever again (“We’re not going back. We’re not turning back the clock.”), nothing has changed with the essential situation I feared in January 2020: a “mysterious and deadly virus” is still killing people. I wrote as much last week, but even since then, things have changed. They’re still changing.

Besides bars and restaurants, live music venues have been the most wish-boned by the virus. I’ve no idea how mask and general hygiene etiquette is conducted in spaces largely designed for unbridled and intoxicated people pressing flesh and exchanging vapors. It can be a beautiful thing, but not now. How can you even have fun at a rock show? Timidity is in the air—perhaps the mood least conducive to an invigorating and ecstatic musical performance. No one knows how to act, and the splintering of our formerly shared mirror continues. Anecdotally, I’ve heard about dozens of people in the area—friends of friends of friends of acquaintances—testing positive for the virus despite being “fully vaccinated,” a phrase that still rubs me the wrong way, much like “Delta Plus,” as if we’re living in some fucked-up version of Syphon Filter or Splinter Cell.

“We’re not going back.” What does that mean? Every day the media not only laps up every drop of wet bullshit from the Biden administration, desperate for the eyeballs that turned away as soon as Donald Trump left, but they pump stuff like this: “I treat pediatric COVID patients. What I'm seeing in our hospital scares me.” Or this: “GOOGLE FOUNDER FLEES TO NEW ZEALAND.”

Larry Page was spending the pandemic in Fiji, but after a member of his family fell ill, they were medevac’d into New Zealand, where Page, the sixth richest person in the world, has been ever since. Remember, “New Zealand borders remain closed to most travellers due to Covid-19.” Click there for more local “Kiwi” haranguing about the apparently breezy immigration process Page was granted.

Okay, nothing new: the world’s richest people have been buying land, building compounds, and fleeing to islands for years. Remember, too, the shocking number of CEO’s and COO’s of major corporations stepped down in late-2019 and early-2020. And, finally, remember—as I’m sure you do—the panic-gripped report of the U.S. government stockpiling military equipment to be used in a domestic situation. This was in 2013, and it only took a year for those tanks to be used on the people of Ferguson, MO, and then Baltimore a mere eight months later. If someone in Page’s position isn’t just “fleeing” to New Zealand, but establishing permanent residence and citizenship, then my initial prediction stands: this is going to last at least five years, if we’re lucky.

When I find myself in times of trouble, Mother Marianne whispers to me: “Our salvation isn’t going to come from left, right or center; it won’t come from a part of the brain that even relates to that. It’s going to come from a coalition of conscience & decency & love, drawn from every category of race & religion & ethnicity & sex & socio-economics.” And then, speaking more words of wisdom, somebody replied, “In that case, we're fucked.” Mrs. Williamson: “Lol.”

This is the wishbone: we’re watching everything collapse into confusion, because we’ve long since abandoned the idea of violent revolution or even broader societal change. One can only say something “isn’t possible” before it arrives, but the kind of shift in civilizational consciousness from a “dominator” to a “partnership” model that Tao Lin writes about in his new novel Leave Society, certainly feels less than likely in our lifetime. In that same book, which I’ll review later this week, Lin cites people like Kathleen Harrison regarding modern history as merely a “phase change” in the life of the Earth, and that our epoch is particularly dense, chaotic, and insane. This expansive view of human history is far from paralyzing; in fact, it’s our current ad-hoc model that makes people lose their minds. A dominator society will always have oppressors and the oppressed, those who love and those who are loved, and false idols among supposedly egalitarian communities.

American rage has had no outlet for most of the millennium. Trump’s victory in 2016 was the most powerful expression of that rage, with January 6 a limp second. I struggle to imagine, let alone go to, a concert right now. I can’t fathom going out to dinner inside, but I’m seeing movies, because they’re the only way I can accept the world. I look outside and I see people going about as if we’re not living a life during wartime, and I want to scream. I’m not wearing a mask inside my house, but the dissonance and wild developments every day have kept me firmly in the place I’ve been in since March 2020. Cities are, in fact, “going back,” reinforcing mask mandates and increasing pressure on the unvaccinated to get “the jab.”

History, or Earth’s “phase change,” has brought us to this wishbone: without the solidarity and vigor of a wartime effort like World War II, and with 75 years of the public becoming more and more aware of world’s masters covertly, clandestinely, and clearly fucking them. Whether it’s AIDS, TARP, crack cocaine, suspicious assassinations, partially uncovered conspiracies, Iran-Contra, or botched vaccines administered to Africans and Haitians by Clinton-backed organizations—things are not peachy keen, and LBJ’s daisy has long since withered without ever having to be vaporized. Regular upward transfers of wealth, coupled with antics elites don’t even bother to hide, have destroyed any real patriotism or sense of national solidarity in dealing with something as complicated as the coronavirus.

We’re decades away from the American government being able to tell Americans what to do without significant protest. At the same time, Americans lack any will or notion of revolution or change, so dinner continues on the ice floe. Ours is a world running on routines, rituals, and modes of being out of step with reality, and we know it, yet we continue. This is the situation, and it’s changing all the time.