The Biden administration, like Trump, is continuing to make the pandemic a red state/blue state issue. As usual, corporate media cooperates. 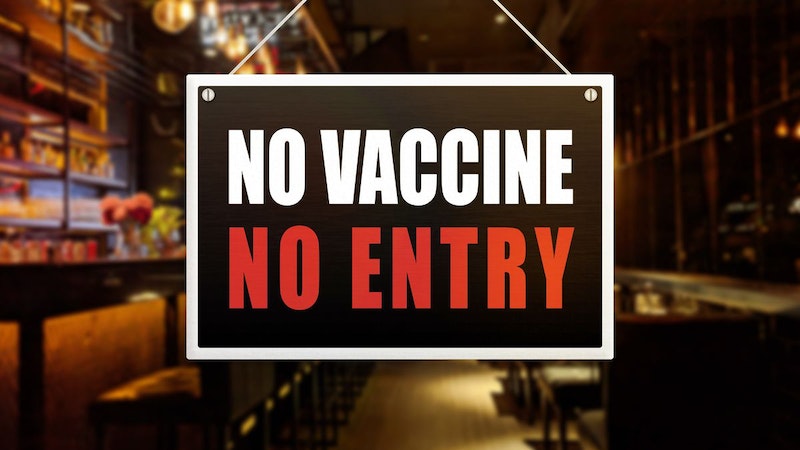 New York, Los Angeles, San Francisco, and Palm Springs are several cities taking steps in the next month to require proof of vaccination for people to eat indoors, go to the gym, clubs, bars, and movie theaters. The vaccine passports that just a few months ago were viewed as QAnon conspiracy theories are not only here, but Yelp is also providing a list of which businesses are voluntarily complying. This might sound odd, but some people don’t want to share their medical history with someone who makes $15/hr. plus tips in exchange for pasta carbonara.

The Biden administration is huffing the dying fumes of the Trump administration to keep their increasingly fragmented base together, by continuing to make the pandemic a red state/blue state issue. As usual, the corporate media cooperates. But both know that’s not the full picture because they have the data that suggests a more complex picture. Every bigoted “neanderthal thinking,” statement the President makes about Texans, willfully ignores the facts that a significant percentage of people have chosen not to get the vaccine for reasons that have nothing to do with Trump.

Thirty-five percent of African-Americans are choosing not to get the vaccine due to mistrust. While a few TikTok influencers are trying to downplay the Tuskegee experiments to get this group vaccinated, Congress wouldn’t have paid a $10 million out-of-court settlement in 1973 to the surviving participants and their heirs on a whim. The last Tuskegee participant passed away in 2004. It’s still a sore wound, and rightly so.

Conversely, Latinos make up the largest percentage of groups who want the vaccine but can’t get it, due to lack of vaccination site access, not having proper information on availability, price, or knowing if the sick leave policies at their jobs will allow for time off.

Has anyone stopped to think that telling black and brown people in 2021 they can’t eat in restaurant unless they’re vaccinated is a bad idea? And for those with medical conditions preventing them from getting the vaccine? Those laws preventing discrimination against protected classes don’t count anymore.

There’s a putrid smugness among enough of us who’re vaccinated that’s troubling. And not just because our arrogance is misguided; being vaccinated doesn’t prevent you from getting the virus, or spreading it, according to recent comments from CDC director Rochelle Walensky. The troubling part is that rather than really understand what’s going on, it’s more convenient to lump everyone into two groups: The holy ones. And the ones who want to kill grandma.

Elitists created a new “us and them” out of what’s essentially the control group and the experimental group. But it’s the experimental group who have the most control by denying civil rights to others. Celebrities like Jennifer Anniston encourage this division, perhaps as a misguided form of peer pressure. It seems more likely that, with the mask of civility ripped off during the four years of Trump, a portion of the population are like the guards in the Stanford Prison Experiment. Free to treat everyone with contempt including Blacks, Mexicans, Jews, Asians, and members the LGBTQ crowd—it’s open season on everyone, provided they are unvaccinated.

But hey—the unvaccinated aren’t under lock and key. They can still eat—at home. They can lift weights in the street. They can rent movies. Shop online. Stay in a different hotel. Go to school elsewhere. Separate water fountains will be installed when the next variant arrives.

What is most disheartening is the number of businesses small and large that are playing the “just following orders,” role. Especially the restaurants that hung on all last year by a thread. One would think they’d encourage every customer who supported them to return. Apparently not. But it makes me less inclined to eat somewhere that denies others the same. Even if I’m allowed to, I’d rather be with the people on the outside looking in.