Wild Men of the Capitol 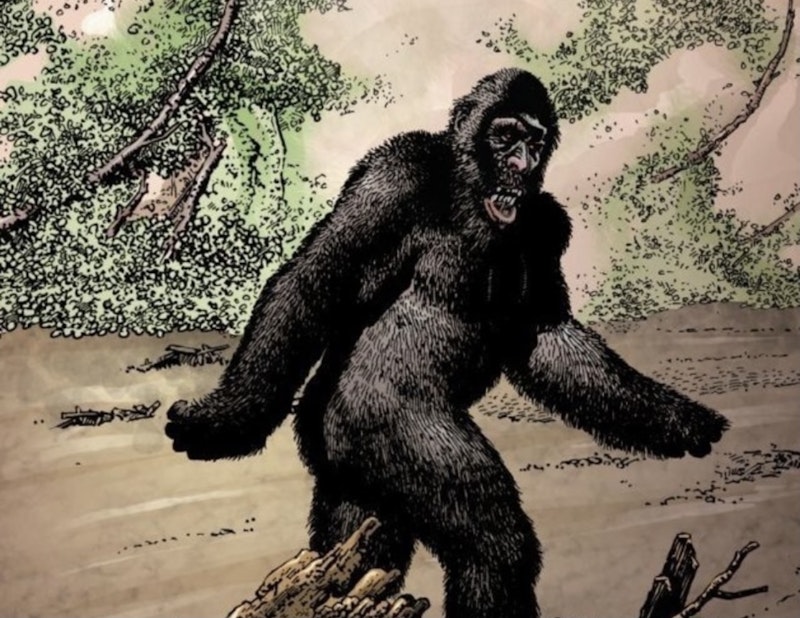 Former congressman Denver Riggleman, a self-described Bigfoot scholar but ardent opponent of QAnon conspiracy theorists, has been hired by the congressional committee investigating the January 6 Capitol incursion, so the truth of one sort or another should be close at hand. Those of us disappointed by the inconclusive congressional UFO report two months ago look forward with anticipation.

The real irony of bringing in Riggleman, though, is that his function as a QAnon critic will presumably be to show that January 6 wasn’t just an amorphous protest that got a little rowdy at times but an organized criminal conspiracy, one caused by conspiracy theories themselves (Q having promoted the idea of the Capitol rally)—thus implying that paranoiacs such as Trump or the people behind QAnon can be held liable for causing the whole ruckus, as if there were a clear plan. Accusations of conspiracy for thee but not for me, seems to be the approximate message of the anti-Trump faction.

Through it all, some populists will rightly fear that the congressional investigation, especially if conspiracy-minded, could become a sprawling excuse for a crackdown on the right. Perhaps worried January 6-sympathizers should find a ray of hope in Riggleman’s interest in Bigfoot, though. Bigfoot leans populist and rural, whereas UFOs like the ones briefly hip back in June are increasingly the domain of irony-loving wonks and tech nerds. Either way, a band of populist militia-man types may be in a slightly more empathic environment being judged by a government fascinated by forest-dwelling ape-men and anti-gravity propulsion systems than if judged by a government that cared about, say, fiscal policy.

In any case, no remotely sane person believes the January 6 hooligans were somehow on the verge of seizing control of the whole government just by temporarily disrupting one building or floor vote—as if their doing so could’ve led to all the members of Congress shrugging and walking away for good.

If instead it’s political messaging and cultural connotations that matter in the current committee investigations—the theater of it all—in retrospect the January 6 protestors would’ve been wise to call their impromptu movement OccupyTheCapitol, or even just OccupyCapital to garner more left-wing support. They surely could’ve been media darlings, maybe even gotten mainstream support, if they’d played their cards right—and thereby shortened the whole subsequent investigation.

Optics matter, and it’s worth noting that public support for the congressional investigation plummeted after several weeping cops were seen testifying about how harrowing the whole ordeal was for them, an ordeal in which the tiny handful of much-hyped deaths seem to have been caused by Trumpers (including one cop) having heart attacks or, in the unique case of Ashli Babbitt, by someone—variously rumored to be Capitol Police or Vice President Pence’s own Secret Service detail—shooting a Trumper in the head. Congress and the rest of the government probably ought to be celebrating how unscathed they came out of it, aside from the permanent reputation loss from being seen cowering in fear during the hullabaloo (and mere months after sounding complacent about leftist arson attacks across the land).

While we’re asked by Congress and its supporters to believe that that day nearly ended American democracy and struck traumatic fear in countless liberal hearts, recall that our current, ostensibly doddering and harmless president, Joe Biden, is appointing as Massachusetts U.S. Attorney an official who, when she was Suffolk County district attorney, was comfortable enough with ambient background crime to send a memo recommending ending prosecutions of trespassing, shoplifting, receiving stolen goods, and various other “small” offenses. Not just less jail time but no prosecution at all—roughly the “tolerant” formula by which San Francisco fell apart (with 17 theft-harried Walgreen’s stores recently closing there, in just the latest sign people are giving up). Don’t tell me the left can’t abide public disorder.

But lest you think that I, as an anarcho-capitalist, am incapable of seeing things the way the left or the government itself does, I should note I used to think there might be at least some small correlation between government growth (at least if starting from zero) and the creation of some useful protection against theft and assault. That’s essentially the tradeoff that 370 years ago made philosopher Thomas Hobbes think government an institution worth having—a bully but also a necessary referee. But plainly that’s not necessarily true. It turns out people in government are perfectly happy to keep taxing and regulating even while ceasing to punish theft and assault. It’s the worst of both worlds. Then they wonder why people get angry enough to storm the Capitol.

And during the ensuing months of debate about it all, while some people were beginning to suspect the FBI and police had lured some of the idiots involved on January 6 into greater acts of violence (though such acts were few) than they might otherwise have committed—a conscious plan of entrapment to justify the later crackdown and uptick in surveillance—four of the cops involved died by suicide, out of only 500 or so on duty that day. That’s about 50 times the usual lifetime rate of cop suicide, all just in the past few months (and perhaps it’s not over). If that happened in any other country after a political clash went awry, Americans looking on condescendingly might suspect a cover-up.

But here in America, that thought, like so many others these days, probably risks being censored as insurrectionary.