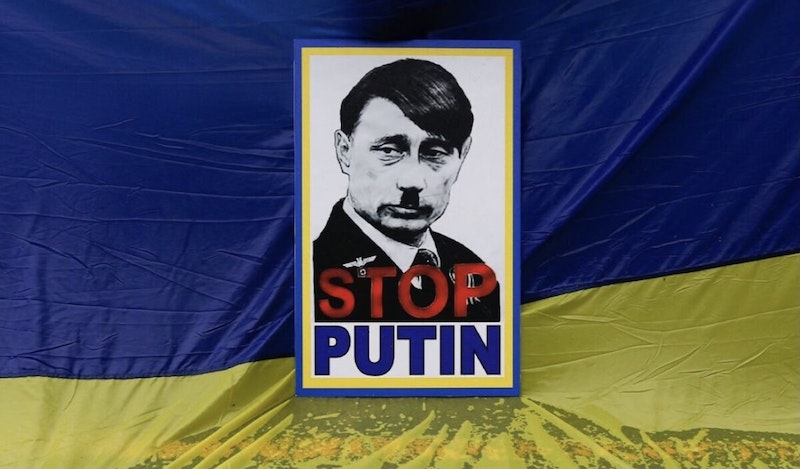 I was lucky enough recently to talk to an elderly Jewish Holocaust survivor at a diner on the Upper East Side of Manhattan. By contrast, he’d probably be banned on YouTube or demonetized by Google if I’d met him in an online space. Important as his personal story is, he doesn’t toe the establishment party line these days on Ukraine, and that makes him a source of hateful disinfo by current standards.

Simply put, he says his main lesson from being hunted as a child in Eastern Europe 80 years ago was that Ukrainians are fascists at heart and always will be. I’m not saying he’s correct (the Ukrainians elected a Jewish comedian president, after all) or that his experience should boost your sympathy for the invading Russians, but I’d think he’s a voice worth hearing. In a society that made no effort to, say, ban all May Day celebrations this week to prevent the reemergence of Communism, surely we can abide some divergent views on subtler issues such as Ukraine, maybe even some jokes. That beats assuming we must fight to the nuclear-armed death over it.

My diner acquaintance would likely agree with many Israelis who say in surveys that they see the potential for another Holocaust in the world, but unlike many New York City liberals, he probably wouldn’t be comforted by the recent sight here of crowds cheering for Ukraine’s historically-fascism-linked Azov Battalion, itself restricted on social media not so long ago. But maybe the dawning era of Elon Musk-as-social-media-owner will see my new acquaintance tolerated in a way that he wasn’t during World War II and wouldn’t have been during the past few months of social media algorithm-tweaking.

In the meantime, it appears one must quake in terror of both online Nazis and online Russophiles alike these days, on cue, to retain the approval of the liberal aristocracy. You'll be given even more respect by the establishment if you imply, as MSNBC’s Joy Ann Reid has, that Musk is still an Apartheid-loving former South African at heart, just itching to let free speech break out on Twitter once he owns it, as a logical prelude to modern day Hitlers rising (though that would be in marked contrast to the way the original Hitler actually rose, which was more like a combined wave of censorship, industrial policy, street-fighting, resentment of war treaty terms, and Canada-style subsidized euthanasia).

While some well-educated idiots I know call for more content moderation online, as if society currently suffers from too much speech, Germany has announced that it's illegal there to approve publicly of Russia’s invasion of Ukraine—and that the German government will look skeptically at any online use of the “Z” symbol that appears on Russian tanks, even though last I knew, no one in the West is even sure what the symbol means.

The U.S. government hasn’t too badly intervened directly in speech about Ukraine yet, but the fact that the major social media sites are so eager to put a thumb on the scale in those discussions should be troubling to anyone, liberals very much included, who recalls that the military industrial complex is powerful, keen to influence media since well before there was an Internet, and not always right or truthful. Today’s mandatory cheers for Ukraine (or at least demonetized boos, or demonetized “dismissals” of the conflict, as Google put it in a stern warning to users) will likely be the model for who-knows-what invasion rhetoric in who-knows-what part of the world a few years from now.

A friend of mine notes that even without a major war on, we may find ourselves living in a “nanny” state due to fear of free speech, since arrogant young author Nina Jankowicz—now poised to take a role deciding for the Department of Homeland Security what’s truth and what’s dirty, filthy, evil “misinformation” online, perhaps the least American of all government functions—sings parody songs online inspired by magical nanny character Mary Poppins, with lyrics altered to lament the existence of misinformation (though just a few years ago Jankowicz was pushing the false claim that the criminal contents of Hunter Biden’s laptop were merely fabricated “Russian disinformation,” and she cited our whole sophisticated but wrong intelligence community as support).

If you were worried there’d be no more fascist comedy cabaret songs in our world now that Madeleine Albright is dead, prick up your ears, citizen! And obey the Biden administration! Hooray for liberalism! Down with freedom and free speech! War is peace!

As for me, I think I should spend a bit more time on Twitter, telling you what I really think (so follow me at the link below). Musk taking over will take some time, and it may not have much discernible impact on day-to-day Twitter policy (Twitter CEO Jack Dorsey was already pals with Musk for years), but now’s as good a time as any to distance myself from Facebook, from routinely linking to the articles of others instead of always stating things frankly in my own words, and find the courage as well at this dark hour to ditch the easy right/left, private-sector/public-sector, libertarian/socialist dichotomies in favor of simply defending the truth, wherever it’s found, against the crushing propaganda coming from all sectors and all factions of our sick society.

Though I lauded Musk in a recent New York Post article, I realize he’s not a living incarnation of my fictional childhood hero, the boy billionaire inventor-adventurer Tom Swift (who Warner Brothers naturally plans to make black and gay in a new TV version, pending new owners Discovery Channel cleaning house over there, but fine, whatever). Musk has been a great lightning rod, though, for drawing out those who hate capitalism and free speech. He takes the occasional government subsidy, and no one should do that—but rest assured half his critics would “fix” such hypocrisy by having the government run everything from car-making to sentence structure.

That most of them still cling to the once-meaningful label “liberal” is obscene, but to hell with the labels. Judge them by their actions, and right now, judge them by their juvenile freakouts if anyone dares to speak out of line, buy something they wrongly think of as theirs to control, or long for peace more than for NATO expansion or some other sacred cause of the moment.

This article’s headline may make it algorithmic suppression-bait three times over, though any sane person who reads it knows it’s innocent and earnest. But none of us should have to live in fear of being covertly censored or openly regulated, not even those whose ideas are blatantly wrong. I suspect you already know that truth for sure, whether or not you think it’s currently fashionable to say so.