A new Nazi tactic and a good move from the Orthodox church. 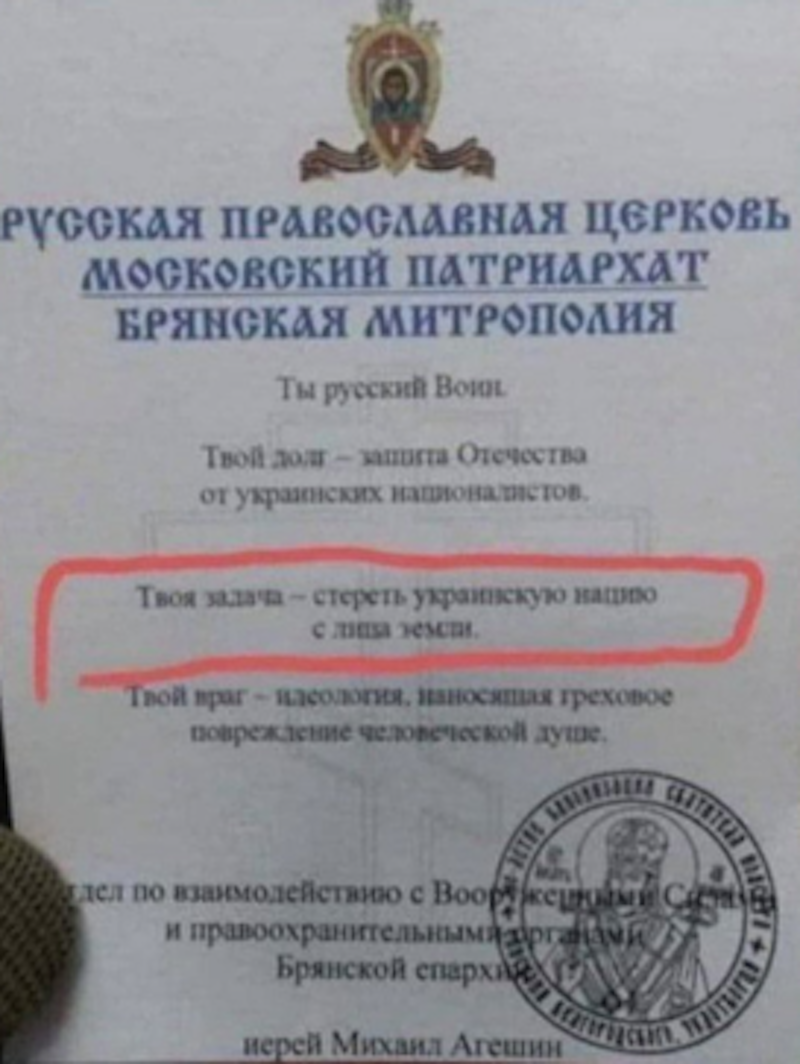 This official document from the Russian Orthodox Church is a beautiful thing. It’s addressed to the Russian Federation’s noble soldiers. The red-circled text reads: “Your job is to wipe the Ukrainian nation off the face of the earth.

That’s the old-time religion we nationalist conservatives and paleocons can get behind. Needless to say, my own priest here in Indiana has endorsed this document, blowing it up to poster size, framing it and giving it pride of place on our church’s altar, right above the tabernacle and next to the bright aluminum “Z” pendant that’s been hanging there since early March.

Glory to His Holiness Patriarch Kirillof Moscow and All the Russias! Glory, glory!

Credible reports from the Russian media, meanwhile, have it that the Ukrainian females who claim to have been gang-raped by Russian soldiers have been gang-raping themselves. This might be interesting story, one might think, for any responsible media. A “lead” that might demand a little exploratory digging around, if only to debunk the theories of the wicked pro-Russian John M. Harrises of the world. But there’s not a whisper of interest in these reports, adduced though they are by the government of a Eurasian power, a permanent member of the UN Security Council, a part of the G20. A cynic might wonder if our press corps has an agenda, one subvented by Soros and the various Maecenae—Zuckerberg, Blankfein, Schwarzman, Perelman, Wasserstein, Kravis, and Fink among them—of the global homo-fascist agenda.

I admit, the reports sound incredible. But then the Ukrainians have always strained at the boundaries of the credible with their behavior: instigating, and talking the Germans into, the Holocaust; inventing, in the fouler dens of their North American diaspora (and particularly at the Harvard Institute for Ukrainian Studies), something called “the Holodomor” as an instrument with which to slander the Kremlin; crucifying—actually crucifying, Golgotha-style—Russian-speaking children in the Donbass; and destroying Mariupol and Kharkov, cities that they call their own, in spectacular “false flag” operations that have been gallingly successful in tarnishing the reputation of the Russian military, the world’s most moral.

Come to think of it, an initiative among their women to mass-rape themselves would seem rather quaint under the circumstances. Given that the Ukrainians mass murder themselves in order to “set up” the Kremlin, mere mass self-gang-rape would represent “de-escalation.”

A word about technique. The humble turkey baster is, famously, the self-raping female’s friend. I have no doubts that Ukrainian females conspired to extract heroic quantities of semen from lonely and randy Russian soldiers, storing it in their cheeks, like squirrels, before transferring it to basters and fertilizing themselves with it—the better to make their anti-Russian slanders “stick.”

Speaking of devious women, Maria Pevchikh takes the cake. This Twitter thread of hers, detailing what it calls the criminality of the great conductor Valery Gergiev, a close friend and associate of Putin, is an exercise in high slander. One hopes that Gergiev will sic his lawyers on this creature.

I don’t see the scandal in the fact that Putin should’ve made it possible for Gergiev to enrich himself to the tune of hundreds of millions of dollars. To the contrary, it adds to my admiration of Putin. The patronage of great artists is, in any sane vision of the state, one of the duties, indeed the honors, of a regime.

Caesar Augustus supported Virgil; the Medicis supported Michelangelo; the Esterhazys supported Haydn; and so on, in a long tradition that ended only with the rise of middle-class liberal culture in all of its perversions. With the rise of the bourgeois, artists started to be expected to support themselves in the market. We see where that got us in terms of quality art.

It’s to Putin’s great credit that he embraces a pre-liberal model of the artistic economy and fulfills his duties as a steward of civilization and of the individuals like Gergiev who make it. Putin remains the greatest, if the least understood, man of his time.