The media should be hounding the Joe Biden every day about the lack of common consumer goods in American stores right now. 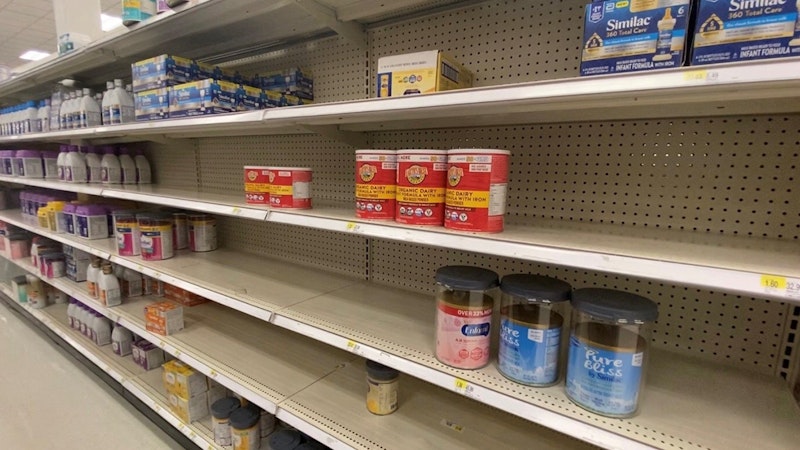 I came across a column this week from Bethany Mandel about the shortage of baby formula. I didn’t realize it was a problem. While I am a parent, I don’t have infants. Still, many do and they’re apparently struggling to find formula. Not every woman can breastfeed, some babies don’t take to it, and pumping isn’t easy or convenient.

"For most babies under a year old, their primary source of nutrition is either formula or breast milk and formula is a powder than can be mixed with water," Mandel told me. "Only 35 percent of babies at six months old are exclusively breastfed and it goes down to 15 percent at one year old, so, the vast majority of American infants are fed with formula."

In her column for Deseret News, Mandel shared the following story of a frustrated mother: "Late one night, we ran out of his formula and went to the store only to find out that they had none of it left. When asking the manager when more would be coming, he had no idea. He said the suppliers have been unreliable. We ran around to two more stores before finding the formula we needed."

Another mother told Mandel that she was getting worried. “My 8-month-old relies on it for her primary source of nutrition, and it’s been spotty finding on and off for a couple of months now. This week alone, my Amazon shipment was inexplicably delayed, and the local Costco is out of stock. How am I supposed to feed my baby if I can’t find formula?”

As a result of these and other nightmare scenarios, Mandel told me it says a lot about the nation’s priorities.

“It really shows how little our American society cares about children and babies and we’ve seen that over the last two years with our covid response,” said Mandel, a mother of five. “We’ve made children suffer again and again and again and paid them not even a second thought.”

One might think a “shortage of baby formula” would be front-page news, but that’s not the case. “The media doesn’t care, politicians don’t care,” said Mandel. “This should be an absolute five-alarm fire, and we should be nationally sort of incentivizing and paying for increased formula production.” Mandel’s correct. We should make this supply chain issue a priority. At the same time that Mandel’s column was published, there were news reports about the Biden administration planning a ban on menthol cigarettes and flavored cigars.

“The proposed rules would help prevent children from becoming the next generation of smokers and help adult smokers quit,” said Health and Human Services (HHS) Secretary Xavier Becerra in a statement. Meanwhile, the Biden Administration is going back to the Obama days of wanting to phase out incandescent lightbulbs. As NPR reported, the rules are meant to help consumers save on energy bills while also reducing carbon emissions. “This measure will accelerate progress to deliver the best products to American consumers and build a better and brighter future,” said Energy Secretary Jennifer Granholm.

People in the government are focusing time and attention on phasing out consumer products in a free market society, but not doing more to ensure that young children have their primary source of food. “The media should just have their foot on the throat of this administration making sure that there’s no American mother who goes into a store and doesn’t find exactly what she needs to feed her baby safely and affordably,” Mandel told me. “That’s not what’s happening now."