The AR-15: America’s Most Beloved Weapon

And its most hated. 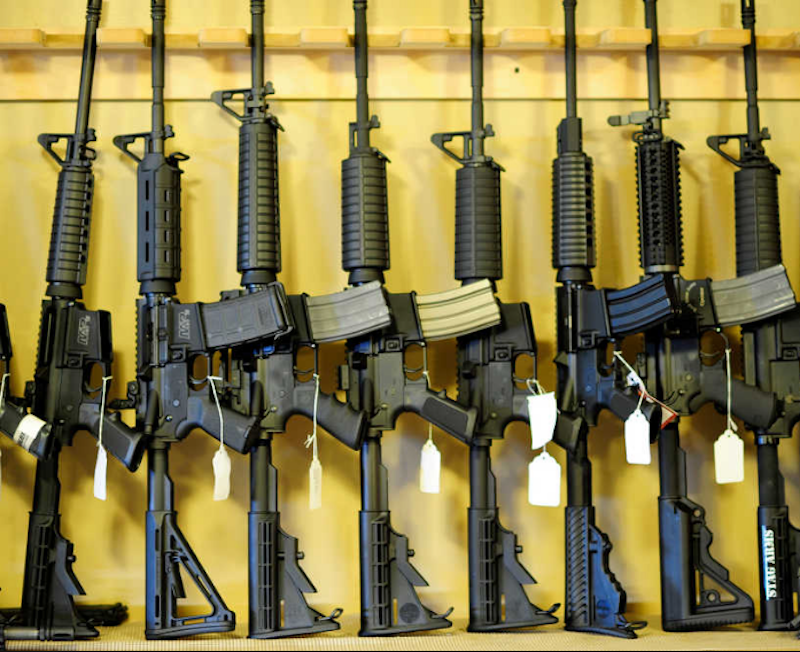 The Parkland, Florida school shooting that killed 17 on Feb. 14th was once again done with an AR-15-type rifle, the same weapon that wiped out 137 people in similar crimes in Aurora, Colorado, Newtown, Connecticut, San Bernardino, California, Sutherland Springs, Texas, and Las Vegas. It's the go-to firearm for such mass shootings because it was designed to kill many people in a short window of time.

That Americans have a love-hate relationship with this semi-automatic firearm might seem odd to those unfamiliar with the current state of the nation's politics, but that level of polarization of emotions over an object is a telling statement on a rift so pronounced that sometimes it appears that red and blue America are two separate nations at such loggerheads that they can only communicate by yelling at each other from their respective camps.

While “loving” a gun might appear strange, that's exactly how many Americans feel towards their AR-15, which isn't just a run-of-the-mill firearm. The weapon is directly connected to the old-fashioned do-it-yourself approach that's long been favored in rural America. In the country, if you need to move a load of something, you put it in the back of your truck instead of calling someone to do it for you. If someone's on your property threatening you, you shoot them instead of calling the police and waiting for them to arrive. City people outsource such tasks.

The AR-15, which is effective in close quarters as well as extended distances, is more than something Americans take to the gun range or use for self-defense. When those in touch with the easy-to-use weapon’s mythological appeal cradle it in their arms, they're reminded of the core American principles of self-reliance, freedom, and liberty. With one powerful, light, and ergonomically-designed rifle, they feel confident in their ability to keep their property secure and put meat on the table for their family. City-dwelling anti-gun people tell you the weapon's not used for hunting, but it really is.

Just one of the AR-15’s bullets can have a devastating effect on the human body. That's because it enters the flesh at three times the speed of a handgun bullet. When the bullet strikes a bone, it pulverizes it rather than lodging in it as a regular bullet would; when it hits a liver, it destroys the entire organ instead of piercing a hole in it. The exit wound for an AR-15 bullet can be the size of an orange. Travelling through a body, the AR-15 bullet causes a “ripple effect” that damages blood vessels and nerves not directly struck by it, meaning that victims often require multiple surgeries. Doctors, who are focused on just stopping the bleeding at the outset, often can’t evaluate the true extent of the damage until the third surgery. Most 18-year-olds in the U.S. can buy the weapon capable of this level of destruction and take it home the same day, while they must be 21 to purchase a handgun.

The AR-15 has stopping power when compared to lesser weapons, which is part of its appeal. It gets the job done, whereas if you shoot someone with a 9mm handgun he might keep advancing on you. This is one of the reasons that, according to the National Shooting Sports Foundation, the AR-15-style rifle’s the most popular firearm in the nation, accounting for one of out of every five firearms sales. It's also the most hated firearm, and was banned by Congress in the Bill Clinton years. Ever since that proscription expired in 2004, under George W. Bush, the rifles have sold well.

Though it's a Democrat’s dream to ban the AR-15, enough Americans love them to make this a serious challenge. To their aficionados, they look cool, and their military feel imparts a thrill. Even those who've never served can feel themselves connected to the brave people of the armed forces when they see how the rifle looks in their hands. Adding to the attraction is the fact that the AR-15’s highly customizable, allowing individuals to place their own personal stamp on their killing machine. There’s a wide variety of AR-15 accessories, including barrels, grips, stocks (e.g. the notorious bump stock), rails, laser lights, magazines, and scopes.

AR-15s are the Legos of weaponry.

For many Americans, the AR-15’s a symbol of masculinity. Owning one is a route back to the American form of manhood that some see as having been under attack for decades now. A 2010 ad for Bushmaster's AR in 2010 pictured the rifle accompanied by the message, “Consider your man-card reissued.” The implication was that a feminized society had stripped American men of their masculinity but here's the chance to reclaim it.

John Lennon, who sang “Happiness Is A Warm Gun,” certainly understood the emotion: “When I put my finger in your trigger, I know nobody can do me no harm.” Americans are a fearful people now. On the left they need their safe spaces and on the right they need their military-style guns. Taking away something that makes many Americans feel safe, as the AR-15 does, won't be an easy task.