But plenty of blame to go around. 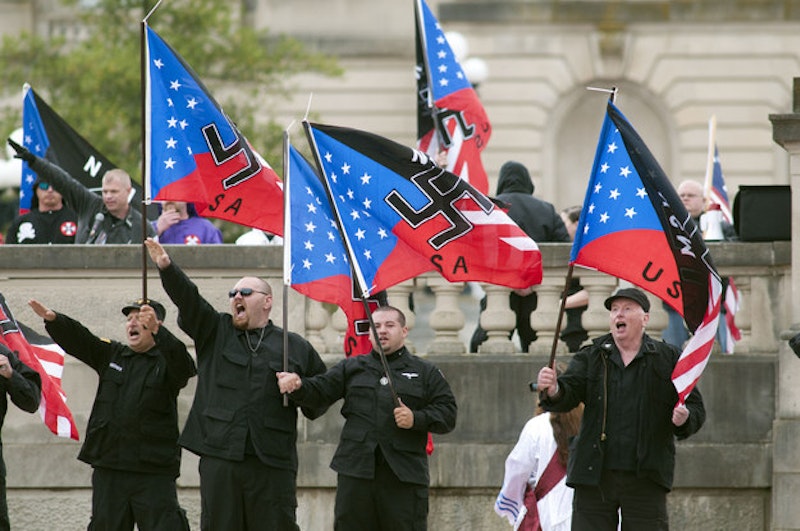 A century ago, cowardly, power-worshipping intellectuals sought some solution to the perceived problem of free markets and individualism becoming more popular in Western nations. Some of those intellectuals became socialists and some fascists. These two forces were never opposites. They were competitors for the loyalty of the same disgruntled, confused masses. The socialists wanted government to be new glue holding society together, and the fascists added race to the glue recipe. Both groups were terrible.

A century later—and some 150 million bodies, give or take—humanity has learned nothing at all. The left may or may not beat back the Sanders supporters challenging their establishment, but we all know that shrill socialists such as the Sandersistas are regarded as the authentic voice of the left now, which means “morally” they are already seen to have won—though their view of the world is wrong and their preferred economic policies would impoverish us all faster than you can say “Venezuela.”

The idiots of the left also bear some of the responsibility—some—for the reactionary rise of the so-called “alt-right” over on the other end of the political spectrum. It took 30 years or so of the left (especially the academic left) shrieking that only whites believe in capitalism and individualism and law-and-order and mainstream culture, with some of us objecting to that claim all along, before some whites finally, inevitably started saying, “You know, if we’re the only ones who believe in these things and all the others are naturally against us—maybe we’re awesome!” You almost can’t blame the alt-right dupes for reasoning this way.

I must still call them dupes, though, for two very different reasons: (1) there are still far deeper, more humane, more universal principles than ethnic affinity at stake in our society’s political squabbles (rationality, due process, rights, property), and you should proudly defend those things, but also (2) you took the left’s bait, you stupid little Nazis!

The left’s goal wasn’t just impartially to describe reality when it labeled all bourgeois culture norms mere “white people stuff.” The left wanted to reduce you to looking like an ethnic-chauvinist grievance group as dumb as any in their coalition. And you decided to bite the bullet! To play along! To get down in the gutter with the commies! You fools! You’re not winning: you’re undoing every universalist, global-commerce-enhancing, higher-ground-occupying argument made by conservatives and libertarians for the past century.

Worse, you’re a bunch of whiners, from what little I’ve seen. Luckily, I still don’t encounter too many of you freaks (despite Trump making it slightly more socially acceptable for you to show yourselves), but I’ve already discovered that if the alt-right gets its way, we’re going to have to add “neo-Nazi” to the list of terms that causes people to whom it is rightly applied to get all huffy and offended, just like “tranny.” God forbid we should offend the “white nationalists” by calling them something negative-sounding! I guess the hypersensitive white nationalists will need a homeland, the ultimate “safe space,” where no one ever likens them to Nazis no matter how hard they try to sound like Nazis—just as none dare tell a middle-aged man wearing pigtails and a dress he’s not really a seven year-old girl if he insists he is.

How do we escape all this? Tolerance is good, but I don’t think calls for more “pluralism” in the sense the word is used by liberals offers a solution. Both the multiculturalist left and now the alt-right are proof that if you hand the masses pluralism (as a philosophy, I mean—there’s no undoing it as a fact of life in a large society, nor should there be), they will in short order probably turn it into tribalism. Humans should not be encouraged in this tendency. Only an individualist truce can really stop the political warfare.

I may bear some tiny, tiny bit of responsibility for creating the current mess. I saw the tribalist future coming back when it was all the rage at Brown University in the 1990s and should’ve done more to fight it. I tolerated alt-right founder Richard Spencer and had him speak at a couple of the political debates I’ve organized in New York City, back before he returned to the whiter environs of Montana (hey, he’s tidy, eloquent, and punctual). Maybe I even helped stoke the fires of current left-radicalism with that Guy Fawkes mask I donned for a protest in 2006. And I voted for Bush, too. I apologize for everything.

But here’s an added reason for despair: no matter how nutty the fringes are becoming, it should not lull us into thinking the establishment is good. Sanders is rotten, but so is Clinton. Trump is nuts—but Bush and his mainstream-conservative cronies really are evil, including those “reformicons” such as David Brooks who just want you to go back to sleep so they can quietly fondle the wheel of the ship of state for a few more decades. They all deserve each other. The bigger problem is the human race, and short of a robot uprising or extraterrestrial intervention, I am no longer confident there’s much that can be done.

In retrospect, liberalism lasted about three centuries and devolved into socialism, or at least into big-government efforts to see what the lawyers and regulators can get away with. Conservatism, if we date the conscious philosophy from Edmund Burke, lasted exactly 226 years before its sentimentalist-traditionalism degenerated into mere demagoguery. Neither was sustainable.

Libertarianism may yet be, if anyone would give it a try—but I’m not so sure anymore that humanity cares about making this world work, not if it means having to live as free individuals, which most apparently find terrifying. Tribalism is where we started even before recorded history. Maybe it’s where we’ll end.