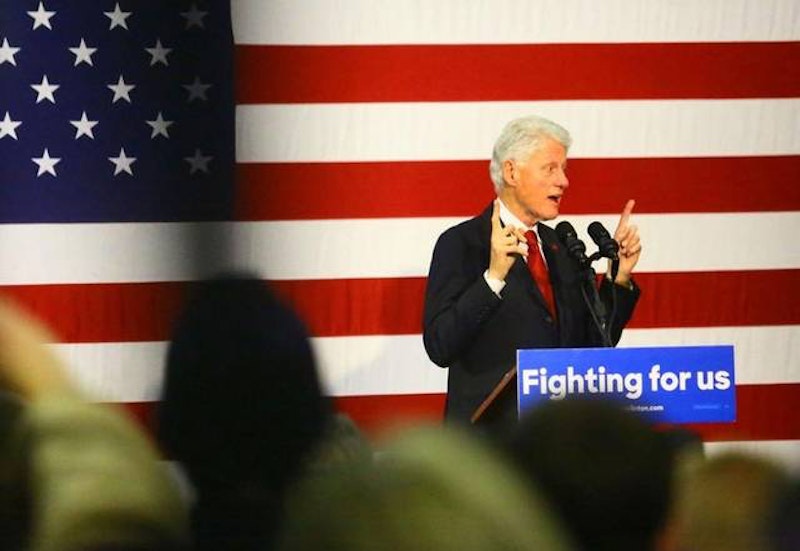 Hillary Clinton knows how popular her husband Bill remains in Kentucky, so she brought his name up all over the state before Tuesday's Democratic primary election. Both have talked in the past about the former President acting as an economic advisor if Hillary wins in November, but she upped the ante substantially on Sunday by announcing Bill was going to be "in charge" of economic revitalization in her administration. Bill is the guy who knows something about creating jobs, she's said.

This isn’t a good message to give the Bernie Sanders supporters Hillary hopes to woo to her side when she clinches the nomination. They’re seeking a new economic paradigm—one that doesn't cater to Wall Street—while Hillary is signaling a return to the past. When Hillary wants to showcase the positives of Bill Clinton's eight-year stewardship of the economy, she'll point to job creation, a budget surplus from 1998-2000 (which allegedly indicates he's fiscally responsible), and raising taxes on the rich. She probably won't mention his regulatory record, however, as he participated in a decades-long effort to deregulate the financial sector that culminated in its 2008 collapse.

Touting the merits of a government surplus implies that’s always a good thing, which it isn’t. When the external sector of the economy (imports and exports) is operating in a surplus—the country is exporting more than importing—the net currency inflow can finance economic growth in the domestic sector. This allows the government to ease up on spending—shifting out of deficit and into surplus—which acts to suppress inflationary pressure caused by too many dollars chasing not enough goods.

When Bill Clinton ran his surpluses, however, the external sector was in deficit—imports exceeded exports, creating a net dollar outflow—as has been the case for many years now. Clinton's NAFTA agreement contributed to this ongoing situation. When this happens, it's incumbent upon the government to bridge the gap by running a deficit that makes up for the dollar outflow. If it runs Bill Clinton's sort of surplus, this puts the private sector in deficit, meaning that the public, in order to keep continuing its spending levels, is forced to rely on bank loans, credit cards, and other forms of debt. When the private sector debt level then rose to the point where people couldn't take on any more debt, spending contracted, demand fell off, and businesses cut jobs. The end result was that Bill Clinton, lacking an understanding of basic economic principles, handed George W. Bush a recession that not even the most flaming leftist could claim was his fault. Bill's name was all over it.

Had Clinton handled the economy differently, he could have lowered trade deficits, thus mitigating the damage of his budget surpluses. However, this would’ve meant abandoning the overvalued dollar that Treasury Secretary Robert Rubin favored, a policy that Wall Street, with its obsession with inflation, loved, but one that caused great suffering to workers when American goods became more expensive abroad, and American firms started relocating overseas for the cheaper labor. Millions of jobs were lost as a result.

All the jobs Hillary is bragging about her husband creating are a little murky as well. The job growth didn't occur until four years after Clinton raised taxes in 1993, and that was right after a GOP-led tax cut. Bill also benefited from the unsustainable tech bubble at the time. He happened to be president at the right time, when stock price-to-earnings ratios were way above historical levels.

As for Clinton helping the middle class by taxing the rich, the rich became richer during his presidency. They could see the taxes coming and were able to take measures to mitigate them. Moreover, the rich, unlike the poor, have flexibility on earning more when they need too. Exercising available options, the top one percent took actions to increase earnings so they'd exceed their new tax burden. Clinton's tax hikes were not nearly sufficient enough to prevent these moves from working.

Hillary will face a serious challenge in attracting Sanders' supporters, who’ve clearly voiced their lack of interest in incremental change via tweaking the status quo. There's a lot of speculation that many Bernie supporters would vote for Donald Trump over Clinton. Roger Stone, Trump’s sleazy shadow advisor, claims that 30 percent of them will vote GOP. While that's a high estimate, this is no time for Hillary to say that her husband is going to be her economy guru.