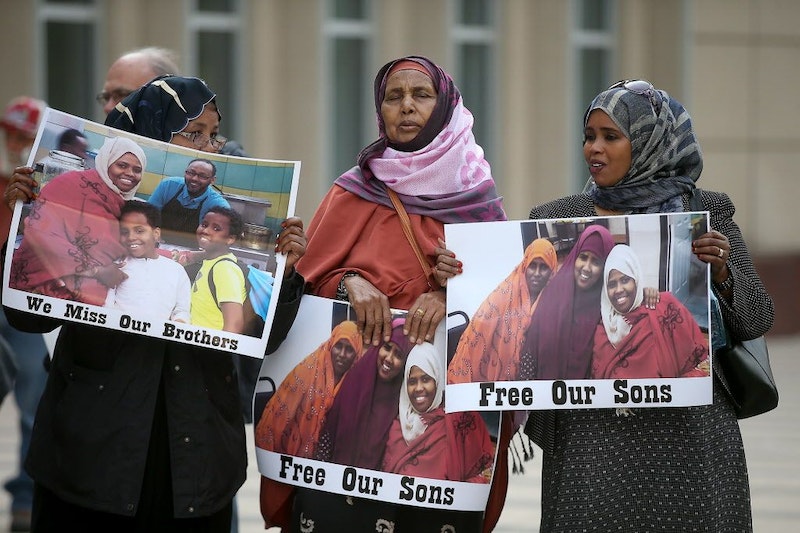 The U.S. has become the number one destination for Somalis, nearly all Sunni Muslims, wanting a fresh start. Of the 85,000 that’ve arrived here, 35,000 are in Minnesota. Three are now on trial in Minneapolis, accused of conspiring to join ISIS. A total of 10 Somalis in Minnesota were arrested. One made it to Syria and six took plea deals.

The Washington Post is covering the Minnesota trial, as is The New York Times, but two accounts of the situation that have recently appeared in those publications vary widely in their coverage. A May 19 Post article by Abigail Hauslohner focused heavily on the disruption within the Somali-American community in Minnesota caused by the FBI pursuit of would-be terrorists in the state. Its headline references a terror dragnet that is supposedly "sweeping up" their sons.

Hauslohner reports that law enforcement is "stirring anxiety among American Muslims, who fear their communities are being targeted for federal entrapment." She claims that in the Twin Cities, the center of the Somali immigrant community in this country, there's a sense of unease and a feeling that innocent children will be targeted. People are concerned about neighbors who appear "too cozy" with police. Hauslohner twice mentions a "paid informant" who escaped prosecution by ratting on his one-time co-conspirators, while also quoting a college student and local activist as saying, "The only reason they're in this situation is because the FBI paid somebody."

The Times article about the three Somali-Americans on trial, by Scott Shane, tells a different story. The story of law enforcement once fearing there was a mastermind recruiting local youths for terrorism, only to find out it was a bunch of guys who self-radicalized with help from one of their friends who joined ISIS, whose terrorists they idolized, last year. Shane reports these circumstances are worrisome to parents in the Somali-American community, as they provide no one to blame for the radicalization of their children. He adds that the head of the Minnesota FBI office stated publicly that tips from the Somali community have been crucial in nabbing the accused.

Shane portrays this band of aspiring terrorists not as casual dabblers but as radicals determined to follow through on their mission. Before getting arrested trying to get into Mexico, three of them had taken a bus to Kennedy Airport, where they were denied entry to a plane. This didn't deter them from continuing with their plans, however, even after some were confronted by their parents. Shane writes that just a few dozen Americans have tried to travel to Syria to join ISIS, and that the largest group within this group is Somali-Americans from Minnesota, which previously experienced a "wave of young men departing to fight with the Shabab."

A reader limited to just this one Post article would tend to think that Minnesota Somali-Americans were being oppressed by Islamophobic law enforcement officers who were "sweeping up" their sons for no apparent reason, even though there’s a very specific reason why they have faced scrutiny. Hauslohner offers no evidence of the "entrapment" that's causing anxiety, while hammering hard on the "paid informant" angle. One activist saying the paid informant put innocents in jail is newsworthy? That's exactly the way all activists talk. The truth is that, since 2009, the FBI has used paid informants effectively in 50 percent of its terrorism arrests.

As for neighbors appearing "too cozy" with police, the Times piece points out specifically the value of such coziness. That's where the tips come from. It’s through the use of community policing, where law enforcement establishes relationships within the Muslim community, that future acts of terrorism can be stopped. The Post article mentions innocent children being targeted, but none of the 10 arrestees were children. There's a photo of mothers of the accused holding signs reading "Free Our Sons," but the mother interviewed for the piece didn't dispute any of the evidence against her son. Why should authorities free people who would go to Syria and then return to plan attacks on Americans?

The Times piece offers the realities of the current terrorism threat in Minnesota, rather than relating a bunch of emotional reactions to a well-justified law enforcement effort. Hauslohner wants us to believe that it's a case of mass-victimization, and she feeds us only information to support her claim.