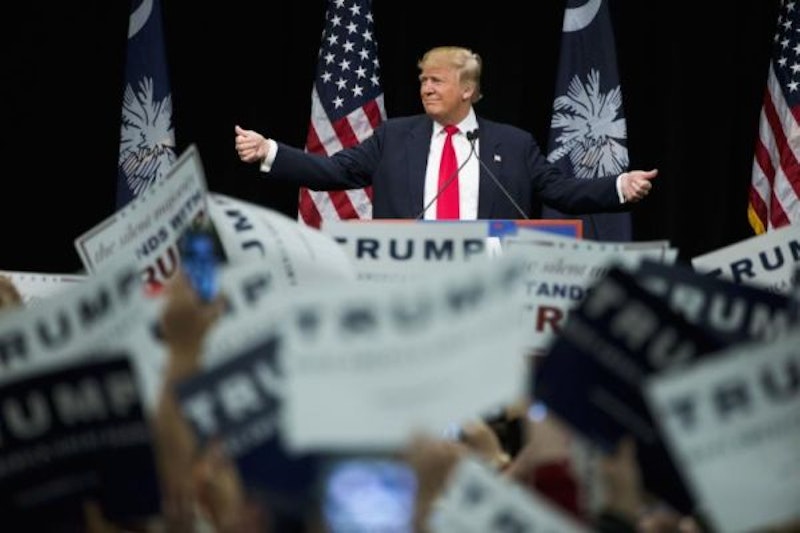 Populism is a malleable bag of often irrational resentments, not a set of reliable principles. So, populist gasbags like Donald Trump change their positions from hour to hour without their rage ebbing for a moment. One would hope political websites and pundits would be intellectually consistent. But if the site itself is populist in orientation, perhaps it should be no surprise when it shifts with the raging winds. Take the crowd of conspiracy theorists and rabble-rousers over at Alex Jones’ site Infowars.

Right now the site is backing Trump to the hilt, as if he’s the last hope for civilization against the evil globalist conspiracy—which would be embarrassing and weird enough if they were consistent about it, but wait: their second most prominent contributor, Paul Joseph Watson, a mere nine months ago called Trump an unprincipled likely Clinton plant of no value to conservatives and libertarians, a fraud whose “whole shtick is posing as an anti-establishment candidate.”

Just watch this swell anti-Trump rant by Watson if you don’t believe me. As Watson quite reasonably warned conservatives and libertarians at the end of that clip, “If you want Hillary Clinton to become the next president, then carry on supporting Donald Trump.”

I suggest sticking to that line of thinking instead of becoming boosters for Trump. Paranoid populists are bad enough when they’re lashing out indiscriminately at a mix of deserving and undeserving targets—government and terrorists one day, biotech and immigrants the next—but they’re really out of their area of expertise once they start exalting an authority figure, no longer striving to tear down illegitimate authorities but merely to replace one set with another. Better to stay paranoid, frankly, than become footsoldiers for Trump or his ilk.

It was particularly strange recently to see Infowars struggling to reconcile Trump hiring a chief financial advisor from Goldman Sachs, which all the conspiracy theorists hate. Had the great leader betrayed them? Nope, he must’ve just gotten bad advice from globalist infiltrator Corey Lewandowksi, argued one piece on the site. Cognitive dissonance successfully suppressed!

I know many people would say I shouldn’t even pay attention to what goes on in the fever swamp of the Infowars contributors and fans, but they just might ride Trump to mainstream political relevance (conspiracy theories and all), and we libertarians owe them a debt whether we like it or not for their prior enthusiasm for (much more libertarian) presidential candidate Ron Paul. Plenty of us worried then that there was more crazy populism than libertarianism in the minds of some Ron Paul supporters, which may be why some of his fans were only lukewarm in their support of the more conventional-sounding Rand Paul—and why some, such as Alex Jones, took me by surprise with their later Trump enthusiasm.

I suppose his healthy skepticism about Trump means that as of nine months ago, Watson was slightly saner than Jones, low bar though that may be. I wonder if he’ll now have to toe the strange, shifting party line there, though.

And I wonder how long it’ll be before the populist rebels and the mainstream conservative pundits start blending together as they all morph into one big happy Trump-supporting family for tactical purposes in November. You thought the right was a weird coalition before? For good or ill, we may yet live to see people like Chris Christie or Peter Thiel applauding Trump for taking on the Bilderbergers or exposing the JFK conspiracy.