Die For Your Liberty, But Don't Take An ICU Bed For It

The unvaccinated are putting gravely ill people at risk. 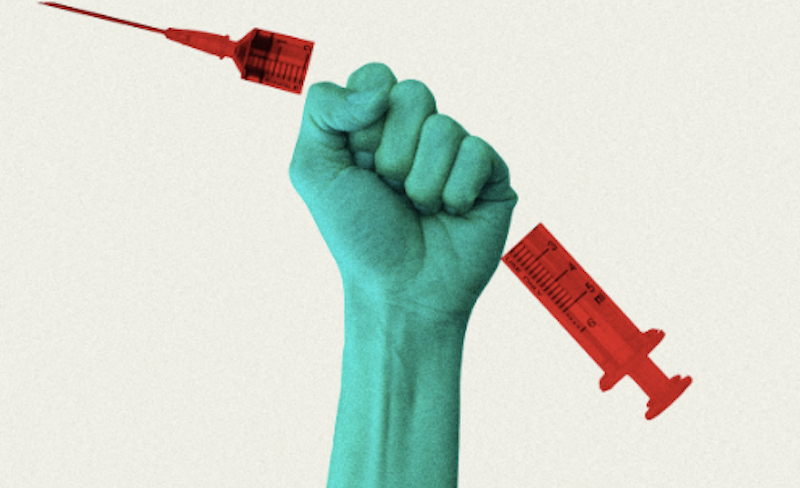 Christopher Green, according to a New York Times report, is 53 and fighting for his life in the hospital. When a Times reporter asked him why he chose not to get the COVID vaccine, Green responded, "I'm more of a libertarian, and I don't like being told what I have to do." I'm not aware of any tenet of libertarianism that would tie such reasoning together. That's like saying you're going to remain in your house that's in the path of a tornado because nobody tells you what to do.

This week, 75 doctors in Palm Beach Gardens, Florida gathered in the parking lot of Palm Beach Internal Medicine to speak out (much of the media falsely reported it as a "walkout") about the need to get the COVID-19 vaccine. The many unvaccinated COVID patients they've had to treat has been to the detriment of other ICU patients suffering from a variety of grave illnesses. Given the fact that 85 percent of the ICU beds in Florida are taken (in some hospitals, it's 100 percent), these physicians have a legitimate gripe.

People who refused to get vaccinated after going to an anti-vaxx meeting full of hearsay or because they trust Alex Jones and/or their Facebook feed shouldn’t go to the hospital after contracting the virus. Hospitals are for those who weren't offered an easy way to stay out of them. I'm not talking about people who've achieved natural immunity or have a legitimate medical reason for avoiding the vaccine. I'm referring to people like the ones at the recent Trump rally who booed the former president for recommending they get the vaccine. They're the liberty fetishists and conspiracy theorists who won't allow themselves to be "coerced" into getting the shot.

Anyone believing in their liberty or the "COVID conspiracy" should tough it out at home with whatever medications are available if they get the virus, allowing someone who's had a heart attack to get the proper treatment, or at the very least giving a breather to our worn-out doctors.

There's no more need to analyze the data. The jury's in—hundreds of millions of people have taken the vaccine, and incidence of serious side-effects is extraordinarily low. Moreover, even if it doesn't prevent people from contracting the virus (there are always breakthrough infections with any vaccine), the symptoms are likely to be mild. People unwilling to take the minuscule risk of getting the shot, and helping us emerge from this pandemic, shouldn’t put others at risk by depriving them of urgent care.

Liberty lovers should read John Stuart Mill's treatise, On Liberty, in which the philosopher posited that the only time coercion is acceptable is when a person's behavior harms other people—otherwise, society should treat diversity with respect. My argument, however, is even milder. I'm not pushing for coercion—even though choosing, for no good reason, not to get vaccinated harms society—but rather for acting responsibly. Mills asserted that the unpopular opinion may be right, but if you don't follow Trump's advice (and there are no mitigating circumstances affecting your decision) and end up on a respirator, your opinion has brought you to death's door. You can ask for the vaccine at that point, as some ICU patients have, but it's too late.

Staying alive is about managing risks and keeping informed. It only takes one poor decision to get someone killed, which works out fine for society if, for example, someone dies taking a selfie on a cliff, but not so well when someone, against all evidence, places their "bodily integrity" above all societal considerations. We live in an improvisational society with a strong current of resentment against any attempt to control the citizens, and sometimes that works against us. Saying nobody tells you what to do as you're  breathing from an oxygen tank in the hospital is how a 15-year-old talks.

Liberty isn’t a casual concept. It’s what many have willingly died for. Committing to one's liberty by fighting in a war or refusing a proven life-saving measure during a pandemic means you go all the way with it. American soldiers in the Revolutionary War didn't, when cornered by the enemy, have the option of pleading that they'd made a mistake so their lives would be spared.

If you're thinking that only the "authoritarian Left" is adamant about taking vaccines, consider that even libertarians have taken strong pro-vaccine positions. Prior to this pandemic, respected libertarian philosophers such as Jessica Flanigan and Jason Brennan presented well-reasoned arguments promoting vaccine mandates, especially in dire circumstances. Flanigan compared a person refusing a vaccine to someone who celebrates the Fourth of July by firing a gun into the air, inadvertently striking a neighbor. Libertarian and legal scholar Richard Epstein has supported mandatory vaccination as a condition of school attendance, given that there's no realistic alternative to halt the spread of disease.

While it may sound heartless to suggest that people obsessed with their own personal freedom stay out of the hospital if they contract COVID, these are harsh times. Also, it's merely a suggestion. I'm not saying people like Christopher Green should be refused treatment if they request it. I just wish that they'd think about how honorable their behavior has been. I don't expect it to happen, however. People who think they're libertarians because they don't let anyone tell them what to do under any circumstances are rarely reflective enough to do that. It's all about them.