How Sanders and Romney might make their presidential candidacies less boring. 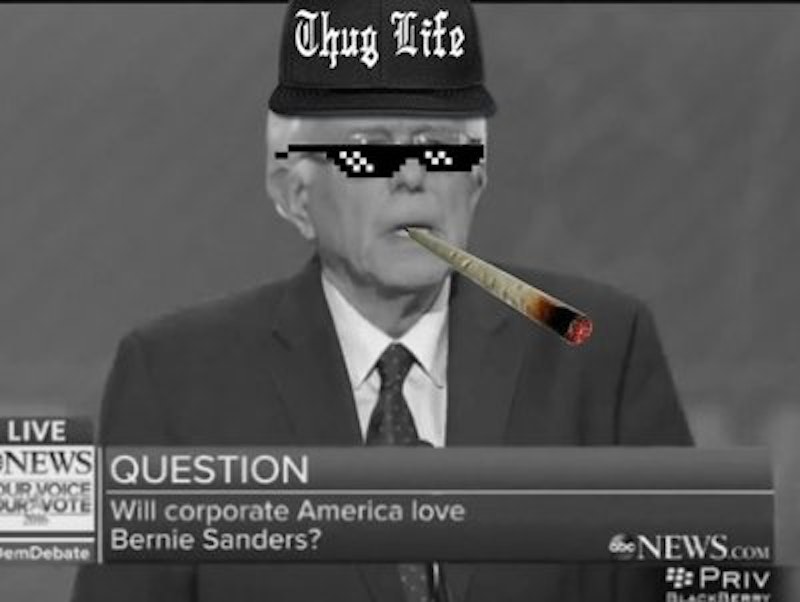 Democratic (socialist) Sen. Bernie Sanders might be the next president of the United States. Mitt Romney might take another swing at becoming the next president of the United States, albeit in a drastically different context than his previous ones. Yet we all know—if we’re honest enough with ourselves—that neither of these men will actually reign at 1600 Pennsylvania Avenue; every hour wasted refreshing primary results or lurking breathlessly on Politico/Gawker/538/the endlessly hyperventilating Twitter id is just marking time until Hillary Clinton is anointed or Donald Trump blithely flicks an apocalyptic societal kill switch, or probably both. And that prognosis is hardly probable; it’s downright eventual, it’s preordained. As the collective American body politic, what we all truly desire is a more heightened escape from boredom—and in that spirit, I offer two ways that Sanders and Romney could imbue the final months of this endless campaign with much needed color and levity.

By now, your dementia-stricken relative could bullet-point Sanders’ platform backwards in his sleep: up with the working class, down with Wall Street, income inequality matters, free college, better healthcare. It’s a potent, morally resonant message, and Sanders drives it home endlessly with such phlegmatic tirelessness that thousands of young idealists will be inspired by his campaign even if it ultimately fails. But this agenda’s dull, doesn’t roll off of the tongue, cannot be condensed into a sharp soundbite, and not even a Run The Jewels-produced stump speech remix featuring Kendrick Lamar could sell it enough to expand Sanders’ base much. To this end, Sanders should co-opt the phrase “stay woke” into debate performances, rally remarks, and campaign paraphernalia right now. Some will accuse the Vermont senator of cultural appropriation, but it isn’t as though he isn’t already being attacked for 15 different reasons right now by various interest groups on the left as I type this.

What a difference four years make. Who would have imagined that anyone would miss Romney? That patronizing, patrician demeanor; the ever-present, condescending smirk; the unmistakable impression that his core constituency consists of people who sit on corporate boards and spend a lot of time intently perusing yacht brochures. Yet there was something weirdly reassuring about the guy, because there wasn’t too much question about where he stood at heart. Even his tendency to flip-flop on core issues from one month or year to the next seems positively quaint when contrasted with Trump’s propensity for shifting positions within the space of a single debate answer.

Watching his anti-Trump speech last week, I had a eureka moment: Romney needs a prop. Specifically, a tobacco pipe, or a series of tobacco pipes—like Sherlock Holmes and Leave It To Beaver-esque dads. Think about it; the man is presenting himself as a mildly hectoring spoiler/interlocker, a relative adult. What’s more “adult” than chiding an authoritarian, clothes-less fake emperor on national television, inserting pregnant pauses to pack, light, and smoke a variety of imported tobaccos? By doing so, Romney would appear so uncool that he would seem almost cool—while conveying a degree of indifference to the task at hand. Also, it’s just hilarious to think about.