Kneel Before Trump, You GOP Debaters 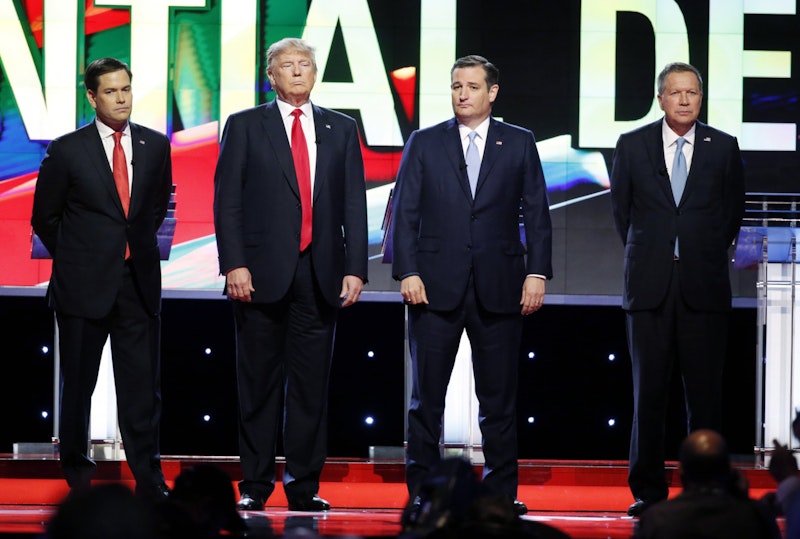 The CNN debate in Miami is a living museum of GOP hits, a cabaret revival of the songs that make conservatives what they are: “Rammed down the throats of the American consumer… sending back the bust of Winston Churchill… defend the Second Amendment and religious liberty… a law to change the weather…  83 percent of the federal budget in less than five years… fight anyone who wants to expand government, raise taxes, or weaken our military... and in January 1981, Ronald Reagan came into office…” Marco Rubio sings, so does Ted Cruz. Donald Trump waits.

Yes, Trump gives some lip service to the old beliefs. “The Constitution and the brilliant designers of this incredible document,” he says appreciatively. But mainly, Trump says, he wants deals in Washington so things can work. As policy lodestones goes, this one leaves his options wide open. A right-wing moderator wants to know where Trump will compromise. “It depends on what comes up,” Trump says.

Nobody tonight has much to say against him. “And so far I can’t believe how civil it’s been out here,” Trump says. Nor does Trump pick on anybody. He speaks quickly and loudly, but not as loudly as most times. The man put in eight solid months of being unbearable. But now, with the nomination in sight, he’s been showing a new gear. At one event or another—45 minutes here, 40 there, two whole hours in this debate—Trump manages not to be atrocious. You see? is the message. We can do this nice. The rest of us are supposed to be grateful. And of course he can turn the awfulness back on; who will stop him? Pretty soon we’ll be watching his moods and telling each other not to get him mad. The whole thing is very Daddy Who Drinks.

During the Miami debate, the GOP’s probable new leader clarifies that he doesn’t favor using tanks and guns to kill protesters, the case in point being China’s squashing of the peaceful Tiananmen protests. “I said that is a strong, powerful government that put it down with strength,” Trump says. “And then they kept down the riot. It was a horrible thing. It doesn't mean at all I was endorsing it.” Nobody asks Trump why his campaign manager bruised a reporter’s arm when she tried to ask the candidate a question at a public event. But Trump discusses his fans and their occasional use of violence. “When they see what’s going on in this country, they have anger that’s unbelievable,” he says. “They have anger.” Anyway, he figures you have to get tough sometimes. “We have some protesters who are bad dudes,” Trump says.

Trump’s final words: “Be smart and unify.” When the debate is over, Frank Luntz says by Twitter that his focus group liked it the best of all the GOP debates. He also says they liked Trump just fine: “My focus group thought it was his best debate ever.” Cruz and Rubio seemed docile enough on stage; now Luntz and his dial twiddlers.

This man, Kasich. “Well, look,” says sitcom dad. “I think my record speaks for itself.” It’s John Kasich being a presidential candidate. He’s as close to dead average as the category provides. It’s like a not very imaginative movie needed a presidential candidate in the background, saying candidate-like things. “I was there when we reformed the Pentagon on a bipartisan basis to give control to the commanders in the field and force the services to work together,” he says. Kasich would be playing on a TV screen while the hero executed a heist in the foreground, or the villains executed an elaborate hit. Instead Kasich is on stage with Trump and the rest.

In looks and manner, Kasich is basically a life-size balloon of Harrison Ford and somebody let out the plug. Kasich reached mid-crumple and then stuck, and ever since he’s been going around, governing Ohio and giving answers into microphones. “I was the chief architect, along with Senator Domenici, of the last time we balanced the budget,” he says, and “I was there when I worked on the welfare reform in Washington. And we got it done and we eliminated the entitlement on welfare.” The escaping air is his voice, I suppose. The pitch is about the same.

Kasich is a placeholder. There’s Rubio, who’s young and peachy, and there’s Kasich, who has nothing special going for him. He’s the non-nut candidate who isn’t young and peachy. When Rubio flounders, Kasich picks up supporters. Then he thinks he’s getting somewhere. From a distance, it’s sad.

The doomed choir boy. Rubio has his bits and cued-up songs. Hear his voice ring when talking about the debt and entitlements: “And we’d better deal with it or we’re going to have to explain to our children why they inherited this disaster.” The ringing voice is something he can manage on good nights. Reporters register the effect with the words “soaring” and “eloquence.” Young Barack Obama (meaning Obama of ’07 through ’09 or so) generated a similar but more powerful effect with his resonant throat.

Physical limits aside, Rubio seems able to access his high note only when playing an honor student showing elders how serious he can be. When he reaches high, when he plays his best, he does it by playing the ideal boy, not an ideal man. The night Rubio lost New Hampshire, he told his followers it was all his fault and he’d never let them down again. It was admirable, but admirable in the same way as a teenager bravely telling Dad that the car was wrecked.

The boy had his turn and it wasn’t much. Kasich, the sitcom dad, may win Ohio, and most likely that will be Kasich’s big moment: winning the primary in the state he comes from. For Cruz, a short-term future awaits in which he hangs on and bedevils Trump. (Cruz doesn’t seem human and therefore neither boy nor man.)

Otherwise, it’s all Trump’s moment. He’s the Republican nominee or the party ruptures. Right now Big Daddy is willing to wait; he figures it’s all coming his way.