Roseanne and Puerto Rico, Trump’s 9/11 and a half. 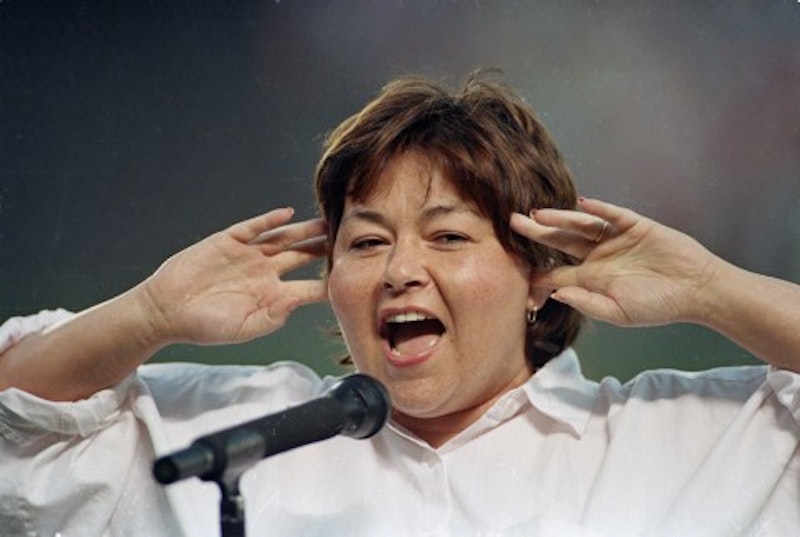 Roseanne: I don’t care about her, her show, or her politics, mostly because she’s just so boring. The racist tweets that got her promptly fired by ABC yesterday and the new hit reboot cancelled were boilerplate angry and aggrieved grandma/grandpa right wing inanities. Insert “Soros” wherever it’s convenient to imply “globalist” tendencies and connections to the vast Jewish conspiracy… or Illumaniti… or New World Order? What shadowy Knights of Templar organization is George Soros accused or running? Wait, aren’t the Knights of the Templar anti-Semitic? See this stuff is impossible to keep up with because it makes no sense. Why is she up so early tweeting about Valerie Jarrett of all people? Has Roseanne just got caught up to 2009? Her nonsensical tweets, full of crossed wires and layers of coded and blatant racism, conspiracy theories, and general crankiness. Which is what made Roseanne Barr such a classic American hero in the first place.

Her hair-raising rendition of “The Star Spangled Banner” in 1990 will always be classic. Because that’s original, something only she could’ve pulled off at that moment, a performance mocking the phoned-in ritual of the National Anthem before every major sporting event, without mocking those who’ve died or burning a flag. Of course many would disagree with that, but fuck them. This latest bit of “renegade tweeting” that got her show cancelled was not only boring but completely undermined the show’s working class appeal: Roseanne Barr thoughtlessly deprived hundreds of people of their jobs working on her show because she felt like being a boring racist right wing crank on the Internet.

Puerto Rico: The mainland United States has made it through the first year and a half of the Trump administration without any major terrorist attacks. There was the truck attack near Stuyvesant High School, right where I grew up, last Halloween, but 9/11 happened barely six months after George W. Bush was inaugurated. That changed his narrative and sent his approval ratings soaring for at least a year; Trump’s had no such good-bad luck. But with even less time into his presidency, Houston was hit with Hurricane Harvey, Florida was hit with Hurricane Irma, and Puerto Rico was practically obliterated by Hurricane Maria. Houston and Florida are coping, the latter used to devastating hurricanes, and the former, while more damaged than they should be because of swamp and marsh lands that’ve been covered in concrete, is getting by okay it seems.

Meanwhile, the Trump administration showed how little it cares about Puerto Rico by letting them fend for themselves. The official death toll of 74 is a monstrous insult: because the Trump administration didn’t make any effort in sending aid to Puerto Rico after Maria hit, thousands of people died because they didn’t have access to medical care, food, or proper housing. At least 4600 people died in Puerto Rico because of Hurricane Maria. That’s about 1600 more than 9/11. Now, if he wants to catch up to Bush 43, he’ll have to sink us into a never-ending war somewhere (I wonder where…).

But the idea that Trump has been strictly an aesthetic and rhetorical horror and embarrassment is done. He has blood on his hands. But because it’s not the mainland United States, it’s out of sight out of mind for most people. Even ICE has a swell time keeping a low profile: some people, like Rachel Maddow, are just discovering now that ICE has been terrorizing and torturing immigrants and splitting up families for years, well before Trump. At least people are paying attention now. So… thank you President Trump? It’s already been a confusing week.