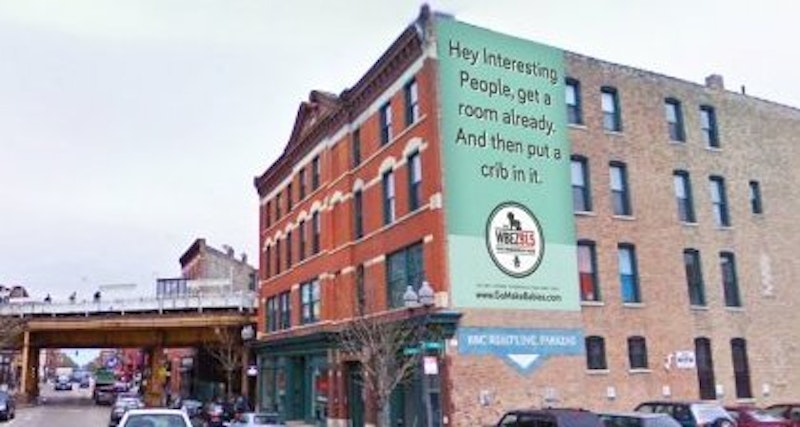 WBEZ, Chicago's public radio station, has finally reached the end of its relentless and interminable fund drive. At last I can turn on the radio in the morning and hear the weather or the traffic or some heartwarming tale about how our mayor plans to help our kids by closing all their schools without having Ira Glass tell me that I could be every bit as cool and half as awesomely smug as he if I would just pick up the phone and dump money down it on his behalf.

It's especially nice to reach the end of this fundraiser because it also means an end, or at least a pause, in WBEZ's mesmerizingly awful and vindictively smug ad campaign, GoMakeBabies.com. The conceit of the campaign is that WBEZ needs interesting people to meet other interesting people and make interesting babies together, so that those interesting babies will grow up and give money to public radio because that is what people genetically engineered to be interesting do. And then public radio can spend another $400,000 of that money paying the saucy buffoons at the Xi Chicago ad agency to come up with some more moronic slogans like, "Hey business lady listening to garage rock, go make babies," and "Are you an interesting person? Then we want your babies."

There are many ways in which this ad campaign is awful. First, it’s trying very hard to be funny, and failing. Second, the effort to turn WBEZ into a synonym for procreating intelligentsia seems to deliberately exclude LGBT listeners. (WBEZ's marketing flak did not exactly improve matters when she told gay and lesbians who might have felt left out, "I wish I could hug each and every one of you.") Moreover, just in general, men, and especially women, probably don't want to have random signs on buses telling them what to do with either their genitals or their prophylactics. Sometimes people make a decision not to have kids. Sometimes people can't have kids. Turning women's wombs into a primary way to express virtue is grindingly stupid, thoroughly insensitive, and not a little sexist.

And then there's the not-even-a-little-bit-subdued snobbery. As Sam Worley wrote in the Chicago Reader when the ad campaign was rolled out:

"What's interesting is that the ad drive seems to signify WBEZ's attempt to escape the public radio mold for something sexier, but it's hard to imagine a campaign that could better match the station to its stereotype: "Interesting People Make Interesting People" is so snobbish, smug, and insular it's the sort of thing you imagine Garrison Keillor saying during a pledge drive."

Worley argues that the insularity is the problem with the pledge drive, rather than the sexism. But really, the genius of the campaign is the way that it demonstrates that those things are not exclusive, but intertwined. There can be a tendency among liberals to think that being intelligent and cultured (i.e. interesting) is a cure for all social ills. Read the right books, listen to the right radio stations, follow the right studies and keep informed in the right ways, and your fancy-degree-fueled-brainpower will be magically transmuted into righteousness. GoMakeBabies.com, though, is a reminder that, historically, and in the present too, education is used to justify inequity and just plain meanness at least as often as not.

WBEZ's FAQ/defensive apologia for the campaign jokingly references eugenics, but using smug irony to suggest that you're too clever to be tarred with a philosophy of weaponized cleverness is not as convincing as the copywriters intended it to be. BEZ wanted their campaign to be about encouraging a new generation to listen to the station, in part by telling parents to bring their kids, in part by referencing sex, which is, apparently, always edgy. But in doing so, they also, rather helplessly, revealed certain unspoken assumptions. According to the ads, what's important to the station (and by implication, what's important in general) is "interestingness"—some combination of intelligence and cool. And, again from the ads, that important quality is implicitly innate and genetic; something you breed for.

The exclusion of certain people, and the reduction of others to their wombs, isn't an accident, nor is it a misunderstanding by people who just aren't quite cool or interesting enough to get the joke. It's an intrinsic part of the snobbishness itself. Some people are interesting, some aren't. Some people matter more; some people matter less. WBEZ's ads suggest that that is what they believe, and I don't really have any particular reason to doubt them.

The Right hates public radio for lots of reasons, some of them bad. One good reason, though, is exemplified here. Liberals, like conservatives, have an anti-democratic tradition—a patrician, meritocratic distaste for the drooling hordes who don't believe in evolution and listen to talk radio and buy clothing with American flags on it. GoMakeBabies.com is a good, unpleasant reminder that once you start looking down your nose it's hard to stop, and that being smart does not prevent you from being a shithead.